Leave CHAZ/CHOP Up and Running Until the Election

The Seattle autonomous zone originally known as CHAZ, now CHAZ/CHOP, is now moving into its second full week as an independent gardening commune or something. It appears that they are trying to take themselves seriously and pretend to be grown ups, doing things like wrestling with name changes and setting up a conflict resolution council.

There is a bit of debate over on this side of the aisle about how CHAZ/CHOP should be handled. I have a lot of friends who wish that someone would send in the big guns to clear the little brats out of the way, hopefully for good. That’s unlikely to happen while the mayor of Seattle is cheerfully hanging out with the kids in the autonomous zone and Washington’s governor spends his days as a full-time climate hoax pimp.

While I am generally a fan of cleaning up hippie filth as soon as it erupts somewhere, I think that CHAZ/CHOP should be left to evolve into all of its dumpster fire potential.

We are probably all in agreement that this upcoming presidential election may be the most important one ever. The American voters need to have a clear picture of the choices before them. Well, the still undecided voters do, anyway. The current civil unrest does just that in a most perfect fashion. Unfortunately, the election won’t be happening in the next week or two. CHAZ/CHOP, however, is happening right now and may be an early Christmas gift for the president.

I can think of nothing better for President Trump than to have CHAZ/CHOP chugging along from now until the election in November. While Crazy Joe the Wonder Veep and other prominent Democrats continue to swoon over everything that the anti-cop mob does, Trump can stay firmly on the pro-American law and order side of things to woo undecided voters in flyover country.

People with American flags are about to enter the CHAZ/CHOP and are not receiving a warm welcome. pic.twitter.com/MczQqWodUR

If Joe Biden can’t be drawn out into public to lose the election on his own, President Trump can run against the antics of the CHAZ/CHOP crowd. With all of this drama playing out in almost real-time on Twitter, Trump would be in his element lobbing tweet bombs at these loony commies day and night.

Even the name CHAZ/CHOP is ripe for ridicule. They’ll probably come up with a few more but right now this is almost comedy gold that Team Trump could be having a lot of fun with. 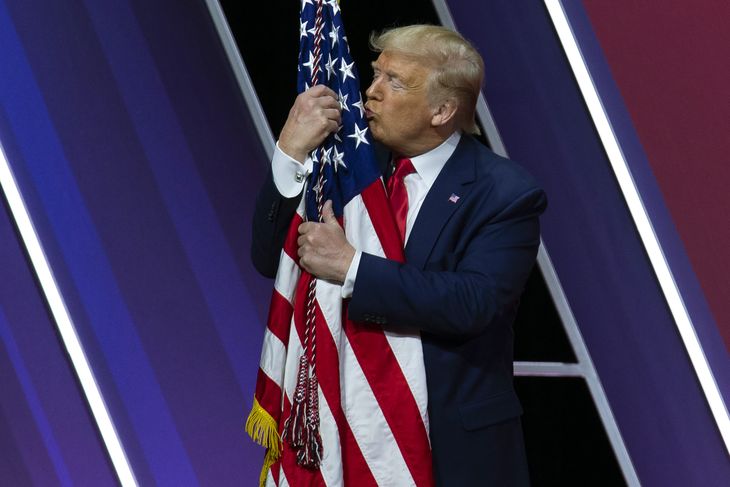 What makes CHAZ/CHOP the perfect election year foil for the president is that it really does encapsulate everything that is awful about the protest and riot side of things. They don’t want change, they want power, and they don’t care how they get it. If skittish voters in Michigan are given a choice between a candidate who champions CHAZ/CHOP and its self-proclaimed warlord or a president who likes hugging the flag, that’s a good scenario for Trump.

We have received 25,000 complaints of reopening violations.

Bars or restaurants that violate the law can lose their liquor license.

People with open containers in the street can be fined.

Police & protesters not wearing masks can be fined.

Local gov't must enforce the law.

The crowd outside Brooklyn Museum. Can I get a haircut now? And can my kids go to the park? @NYCMayor pic.twitter.com/cgsCd9qBsT

Christmas Is Just Around the Corner

Enjoy an espresso shot on-the-go with this device. https://t.co/7UNOREJS5J pic.twitter.com/78JlnrUESv

George Floyd’s Brother Opposes the ‘Defund the Police’ Movement, Will He Get Canceled?

Buffalo, NY Teen Lauded For Cleaning up After Riots

LOLOLOLOLOLOLOLOL(breathe)LOLOLOLOLOL: Liberals Still Think Obama Was the ‘Best President Ever,’ Here Are 14 Reasons Why That’s Ridiculous

Don Lemon isn’t bright, he probably wonders about a lot of things. CNN’s Don Lemon Wonders ‘How Can You Not Be Racist’ if You Grew up in America

Washington to International Kangaroo Court: Don’t Go After the U.S. and Israel

Is an Oscar Becoming a Participation Trophy?

Let’s play the “What if he had been a Democrat?” game. NBC Anchor Asks Sen. Scott If He’s a ‘Token’ GOP Black

CHAZ/CHOP has a grievance committee or something. Residents of Seattle’s CHAZ Complain ‘They Took Our Rights Away’ as Violent Crime Goes Unchecked

Nashville Protesters Set Up ‘Autonomous Zone,’ Governor Says It ‘Will Not Be Tolerated’

Horror and Humiliation in Minneapolis

In 2020, ‘It’s the Enthusiasm Stupid!’ And Team Trump Seems to Know How to Generate It

U.S. Imam and U.K. Academic Agree: Christianity Is to Blame for the Riots and Destruction

Interest in CCW Classes Soars, But Why Is Anyone Shocked?

It’s a mistake to defund police departments. These reforms would work better

Sure, it was those 4 people at Starbucks. Los Angeles Times Claims Coronavirus Cases Are Rising and It’s Due To Re-Opening, Not Riots

Bill Maher Rips Democrats Over ‘Defund the Police’: ‘They Must Have Meetings to Be This [Bleeping] Stupid’

Message To BLM Protesters: “Don’t Mess With The Alamo”

Spike Cohen On Police Brutality, Pandemic Lockdowns, Satire, And Running For VP As A Libertarian

‘Asking for CNN’: Greg Gutfeld’s brutal ‘question’ about anchors inciting a race war to push a narrative hits CNN right in the danglies

Once homeless himself, shelter director helping others turn lives around

Found: The Oldest and Largest Maya Structure in Mexico

If we’re lucky, this week will only have seven days.

PJ Media senior columnist and associate editor Stephen Kruiser is a professional stand-up comic, writer, and recovering political activist who edits and writes PJ's Morning Briefing, aka The Greatest Political Newsletter in America. His latest book, Straight Outta Feelings, is a humorous exploration of how the 2016 election made him enjoy politics more than he ever had before. When not being a reclusive writer, Kruiser has had the honor of entertaining U.S. troops all over the world. Follow on: Gab, Parler, MeWe
Read more by Stephen Kruiser
Tags: 2020 PRESIDENTIAL ELECTION DONALD TRUMP PROTESTS CHAZ
SHOW COMMENTS