The Morning Briefing: Treatment of Ron DeSantis vs Andrew Cuomo Is Why People Should Hate the Media

Media Malpractice At Its Worst

As I have written on more than one occasion, my already intense dislike for the mainstream political media in America has managed to deepen during this pandemic insanity that we have all been going through. I have been writing about liberal media bias for almost two decades now and I really didn’t think the MSM could sink any lower in my estimation but they’ve really been plumbing the depths of dereliction the past couple of months.

One need look no further than the disparity in the treatment given to two governors of heavily populated states: Andrew Cuomo of New York and Ron DeSantis of Florida.

For reasons that defy any rational explanation, Cuomo’s handling of the coronavirus crisis in New York has been lauded by the American media, even though it has largely been an unmitigated disaster. Some have recently attempted to approach the subject but you won’t see a lot of full-on condemnation of Cuomo, which is what he deserves.

Foreign media outlets are under no obligation to cover for American Democrats, however. A Wednesday article in the U.S. edition of the U.K. Guardian said that Cuomo’s “handling of the crisis should get him thrown out of office.”

Contrast that with the treatment the press has given him here for the past couple of months. They’ve been slobbering over Cuomo so much that he became the number one choice to replace Crazy Joe the Wonder Veep if the Democrats finally reached a point where they had to get rid of him. 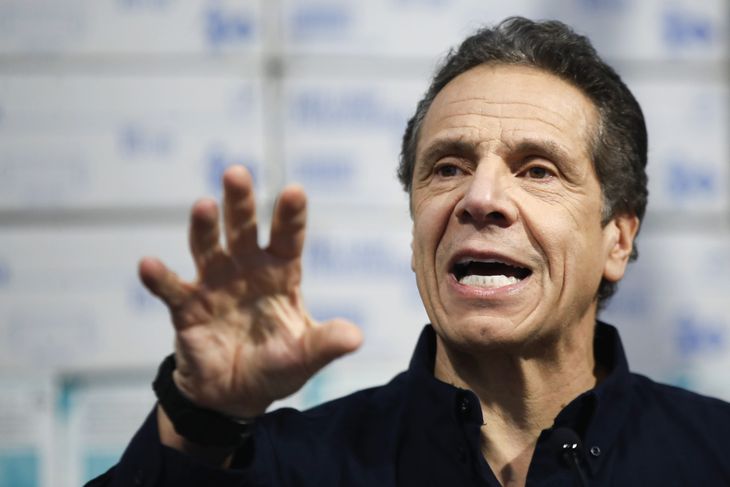 That’s right, despite having the highest body count of any governor and being responsible along with New York Mayor Bill de Blasio for worsening the problem in the rest of the country, the American media has been pushing Cuomo as a legitimate consideration to be the next president of the United States.

Gov. Ron DeSantis of Florida, on the other hand, has been vilified by the mainstream media for a variety of reasons. His greatest sin thus far has been NOT turning into a petty tyrant and proving that giving citizens some freedom isn’t the death sentence that we’ve been told it is.

Here’s an example of some of the treatment he’s gotten. Go to the bottom of this tweet and see Jennifer Rubin’s unhinged comment.

This was all after Jen Rubin and Yashar Ali tweeted “DeSantis has blood on his hands.” Neither of them have tweeted anything nearly as negative about Gov. Cuomo, despite the vast difference in their handling of the virus. pic.twitter.com/0AA62nuOFr

Rubin — and many other media hacks — also said that Floridians were going to die because DeSantis didn’t issue a statewide stay-at-home order. Didn’t happen.

Yesterday, our sister site Twitchy had a great post featuring a Twitter thread that details just how awful the media has been to DeSantis — and how wrong they’ve been.

Well, DeSantis got in front of a microphone yesterday to blast the media idiots and it was glorious:

"You've got a lot of people in your profession who waxed poetically for weeks and weeks about how Florida was going to be just like NY."https://t.co/jTzJmKk8X0 pic.twitter.com/1sGw3Z1P3V

He’s right, of course, the all-precious narrative must always be protected by the MSM and anything that challenges it must be destroyed. The current narrative that reopening will be deadly and continued lockdowns are saving lives is currently being blown out of the water, especially by Florida.

The media have been deserving of all of the scorn heaped upon them as they’ve thrashed about in the throes of Trump Derangement Syndrome. Their treatment of DeSantis after having worshiped at Cuomo’s feet while he was infecting the country deserves extra helpings of it from all good Americans though.

You Don’t Say No to an Archbishop

BREAKING: The Archdiocese of St. Paul and Minneapolis will NOT comply with the new guidance from Governor Walz that only allows 10 people inside or outside churches. A letter to parishes across the state is signed by Archbishop Hebda and all six bishops in the state. https://t.co/PyzFIorMed

BUT HOW WILL WE KNOW WHAT CHARLIZE THERON THINKS ABOUT TRUMP’S TARIFFS?!? 2021 Oscars May Be Postponed, Hopefully Forever

Why Does This Ted Cruz Tweet Make Obama Officials So Nervous?

After the Pandemic, Should the U.S. Change to a 4-Day Workweek?

‘Both of My Husband’s Parents Died of COVID in Nursing Homes.’ Fox News Meteorologist Demands an Investigation

Here’s a Great, Obvious Idea to Hold China Accountable That’s Sure to Become the Next Partisan Divide

Of Course the Public Is Panicking Over This Kind of Misleading COVID-19 Data. Here’s How It Should Be Presented

What’s Up With the Media’s Irrational Hydroxychloroquine Derangement Syndrome?

I bought one just before lockdown, does that count? Lenovo profit beats estimates, sees growth as more people work from home

Charlie Baker Praises Symmons Industries For “Reopening” And “Converting” To PPE, Despite Laying Off Over 100 Workers And Never Closing Or Converting

Joe Rogan Holds Off on Move to Texas, Moves to Spotify Instead for $100 Million

Here Are Five People Who Say Hydroxychloroquine Saved Their Lives

Lock her up! Susan Rice in 2017: ‘I Know Nothing About This. I Was Surprised to See Reports From Chairman Nunes’

Kira: No, You Are Not Insane. None Of This Makes Any Sense

As the Battle Rages Over When to ‘Reopen America,’ May We Have a Word About ‘Risk,’ Please?

Institutionalized voter fraud will kill America quicker than coronavirus. Federal Judge: All Texas Voters Can Vote By Mail … For Now

Pompeo On IG Firing: You’re Darned Right I Ordered The Code Red On Linick — And Bribe-Taking Menendez Should Stop Leaking

Not from me, anyway. Don’t Expect A Baby Boom From The Pandemic Lockdown

The end of the ratio? Twitter testing a new feature that will make journalists’ hot takes ratio-proof

The Cure for Coronavirus Is Not More Government

CNN Praises Governor Cuomo For Killing Off The Elderly Since They Probably Would Have Voted For Trumphttps://t.co/k0dw02rfpO

I’ve taken to putting a splash of coffee in my whiskey.

PJ Media senior columnist and associate editor Stephen Kruiser is a professional stand-up comic, writer, and recovering political activist who edits and writes PJ's Morning Briefing, aka The Greatest Political Newsletter in America. His latest book, Straight Outta Feelings, is a humorous exploration of how the 2016 election made him enjoy politics more than he ever had before. When not being a reclusive writer, Kruiser has had the honor of entertaining U.S. troops all over the world. Follow on: GETTR, MeWe, Gab, Parler,
Read more by Stephen Kruiser
Tags: MEDIA BIAS GOV. ANDREW CUOMO RON DESANTIS