Seven suspected antifa terrorists have been arrested for a series of attacks on the federal courthouse and the officers protecting it in downtown Portland, Ore., over the July 4th holiday weekend.

For six hours on July 2-3,  federal officers had to hold the line at the shattered main doorway of the federal courthouse in Portland as antifa terrorists assaulted them with IEDs, M-80s, mortars, bricks and other objects.

Rioters shone lasers into the eyes of the officers as they fought to hold the door to protect the battered courthouse. According to a news release from the Department of Justice, antifa rioters attacked officers with a variety of objects in addition to threatening their lives. Officers sent to “protect the courthouse have been subjected to threats; aerial fireworks including mortars; high intensity lasers targeting officers’ eyes; thrown rocks, bottles, and balloons filled with paint from demonstrators while performing their duties.”

The battle at the courthouse occurred after days of rioting that started on May 26, the day after George Floyd was killed by a police officer in Minneapolis. Rioters from Black Lives Matter and antifa set fires to the police station and destroyed several businesses in Minneapolis. Not to be outdone, Portland’s professional protesters went into action to equal their destruction. 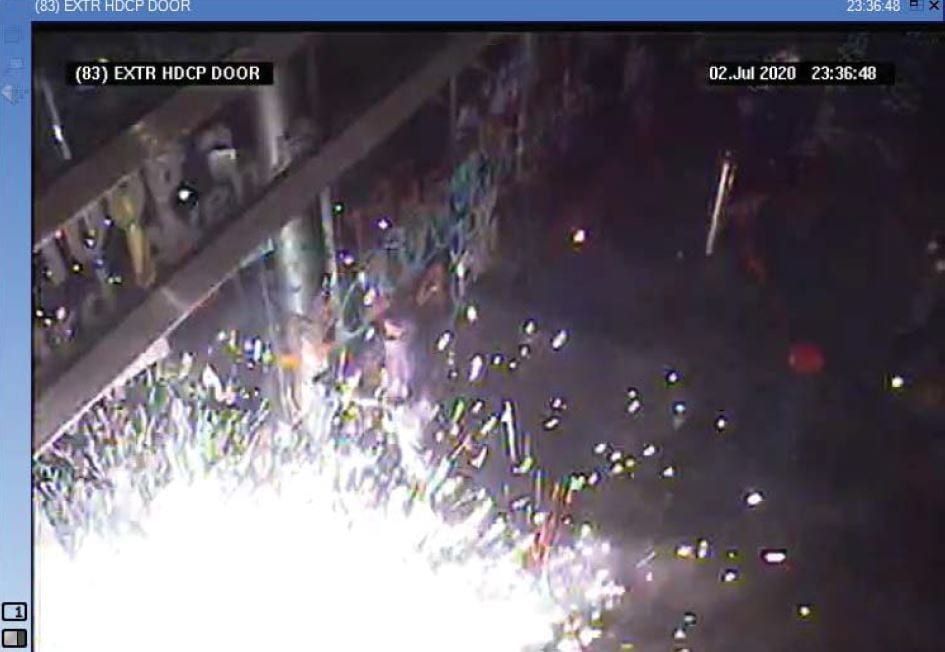 As officers held the line at the courthouse door, IEDs (pictured above) were tossed in.

The scene in downtown Portland has taken on the look of a dystopian urban war zone.

For over a month police have responded to criminal activity in downtown Portland and in other neighborhoods that has caused millions of dollars in damage and has threatened human life and safety. pic.twitter.com/bdEHYENfqr

The Portland Police say rioters have used tactics seen at the protests in Hong Kong.

We have seen all of this at demonstrations in Portland. https://t.co/jYlZrHKhH8

Despite changing police chiefs to appease Black Lives Matter, little has changed in the way Portland has dealt with BLM and antifa protesters. There’s pretty much free-range rioting and a catch-and-release policy for the few who are caught. Only a few face charges in court.

Business owners have begged the city to please stop the rioting by antifa and BLM.

Well, I’d like people to come back to downtown. And so I would like the leaders to stress to people that downtown is not an unsafe place to be. And I think a lot of people that don’t live downtown have this idea that its like a battle ground down here. During the day, it’s a ghost town.

Ghost town? Can’t imagine why that would be.

As police follow the near-hands-off policies by Portland’s leftist mayor who doubles as the police commissioner, the federal government had other plans. It sent in reinforcements from multiple agencies to protect federal property, including the “U.S. Marshals Service deputies and officers from the Federal Protective Service, Homeland Security Investigations, and U.S. Customs and Border Protection.”

And once again, there’s more evidence that antifa members, such as they are, crossed state lines to participate in the riots. Two of the seven charged with federal crimes were imported to Portland from Seattle and Oceanside, California.

That means they crossed state lines to riot and that’s also a federal crime.

Obviously, Attorney General Bill Barr and federal law enforcement have shown that they’re willing to do the job that local officials don’t want to do.

The DOJ says the accused rioters appeared in court on Monday.

On July 2-3, 2020, Olsen is accused of using his body to push on and hold a glass door at the Hatfield Courthouse closed, preventing officers from exiting the building and causing the door to shatter. With the door broken, a mortar firework entered the courthouse, detonating near the officers. The officers used shields and their bodies to block the open doorway for approximately six hours until demonstrators dispersed.

On July 4, 2020, Ahuja is accused of willfully destroying a closed-circuit video camera mounted on the exterior of the Hatfield Courthouse.

On July 5, 2020, Blank is accused of assaulting a federal officer with a shield while the officer was attempting to arrest another protestor.

On July 5-6, 2020, Faulkner, Fellini, Porter, and Teo are accused of assaulting federal officers with high intensity lasers. At the time of his arrest, Faulkner also possessed a sheathed machete.

This is what antifa rioters have been systemically doing to the security cameras in downtown. They climb up and use weapons to destroy them. @MultCoSO is asking for help in identifying this vandal: pic.twitter.com/Q6QX6EtL1A

That guy could get a gig in the circus – if the Left allowed circuses to exist anymore in Portland, I mean.

Portland has been under siege by these terrorists for years.

AG Bill Barr and the Trump administration are finally doing something about it.

It’s unlikely, however, that there will be any thanks from Leftist Portland to President Trump for beginning to restore peace.