You can be forgiven for your skepticism of the stated reason behind by the rioting, looting, statue shaming, and “autonomous zones” around the country.

The intentional chaos inflicted by another acronym-challenged mob has long ceased to be about George Floyd’s horrible murder at the hands of police officers.

Police brutality is the raison d’être now but that’s fleeting because each of the cultural revolution franchises has moved into the business of tearing down statues to continue the violence and need for attention.

And, of course, the real reason: to gain political power.

That’s why as CHAZ CHOP Antifastan winds down after hapless Mayor Jenny Durkan threatened to send in a platoon of social workers, there’s been a humorous power struggle between “leaders” of the movement.

Credibility fail, @CNN. You didn't even do your due diligence. You should've talked to @NikkitaOliver or @soultypechild instead of some two-bit claptrap crap like that turkey.

What a fantastic failure.

Raz the Rapper Warlord is out, according to a woman who claims she’s the weapons procurer for the army of zombies, who both disagree with a frequent social media commentator who has established a breakaway autonomous zone around the Space Needle.

My advice, do not follow this man anywhere. I said what I said. Chop isn’t the end game. Our demands are. We will mobilize from chop. But not today. Stay strong #Seattle #seattleprotest #seattleprotests https://t.co/ReAKXDAa2X

Pretty soon you’ll need a scorecard to just keep track of the leadership of this group.

Elected Democratic leadership has been silent about the violence or, as Nancy Pelosi has done, encouraged more.

And now comes the political pay off of all the destruction, theft, chaos, rioting and looting.

Behold, a voter guide for any and all CHOP or CHAZ who made Antifastan their home since June 8th.

Dear Comrades in the Struggle

This voter guide appears on the “Capitol Hill Occupied Protest (Official Account)” on Twitter, which has subsequently gone dark. Perhaps the result of another power struggle?

The tweeted message starts with “Dear Comrades in the Struggle.”

It discusses the relocation of the CHOPistanis after social workers succeed in chasing them out. It discusses the numbers of people at new locations around the city, such as the Space Needle. It ends with the voter guide. 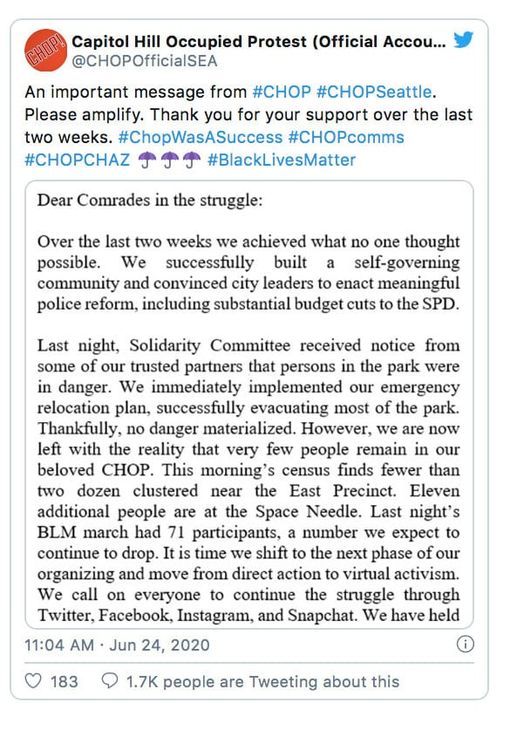 It encourages all CHOPistanis to vote for Joe Biden for president, Jay Inslee for governor and Jenny Durkan when she’s up for re-election.

It’s possible that this is a troll or the result of another power struggle.

But, considering the unserious nature of this movement, it’s hard to know which.

Even After Weekend of Extreme Violence at ‘CHOP,’ Clueless Seattle Mayor Says Things There Are ‘Improving’

‘Is George Washington Next?’ – Why, Yes, Mr. President, Yes He Is. The Mob Tears Down Washington Statue in Portland