Portland, Oregon’s police chief stepped down on Monday afternoon after weeks of riots and protests. It’s just another revolution in the revolving door of at the Pacific Northwest town’s cop shop.

She stood down to make room for a black member of the Portland Police Bureau to take charge.

Jami Resch “stepped down” from her post after only six months on the job to make way for a new black police chief, Lieutenant Chuck Lovell, who instantly jumped over senior officers, captains and assistant chiefs and other command staff to take the post.

The riots in the city over the past ten days since the death of George Floyd have intensified Portland’s protest culture. Minneapolis Police’s killing became every-other-city’s problem.

Portland, especially keen to curry favor with the “woke” crowd took the message to heart.

I have listened and our community and you have said show us change. PPB needs to be the leader in change. It starts with trust. This change in leadership comes from my heart.Chuck Lovell has been dedicated to service his entire life. I am 100% confident in him and his leadership.

Resch, who has been with the Bureau for 20 years and will stay on in another capacity, said the events of the last ten days convinced her that she needs to step down and put a black person in charge.

Over the last ten days I’ve watched our city. I’ve listened and I hear you. I’ve asked time and time again, “what do we need to do?” and each time we hear “show us change.” The Portland Police Bureau has made change. We’ve made policy changes. We’ve made changes to our discipline guide. We’ve sent our officers to implicit and procedural justice and implicit bias training. … Those are changes but they are not the change. What PPB has not done publicly is stand up and say “we will be the start” of the change and take a step towards that change.

Portland’s most obvious problem has been giving indulgence to antifa and allied groups to riot and commit acts of violence and vandalism.

But in the presser today, Mayor Ted Wheeler said, it’s time to change the police department again,  “to let us lean into change and innovation in the pursuit of true justice in our community.”

And he laid out his priorities:

My priority is protecting the lives of demonstrators, first responders, and the people who are in custody in the justice center (jail). We going to monitor protest activity and evolve and adjust our response to provide effective and respectful public safety services.

As a result of the riots, Wheeler has taken police out of the schools, making them free fire zones again and handed out more money for “community investments.”  He has ordered police to use less “CS” gas for riot crowd control “especially now for COVID-19” afflicted criminals.

That’s right. Oregon is still more closed than many other states because of coronavirus, but riots and peaceful protests are just fine with government officials. Still, those rioters should not have to breathe in CS gas because “especially now for COVID-19” it might hurt their lungs. 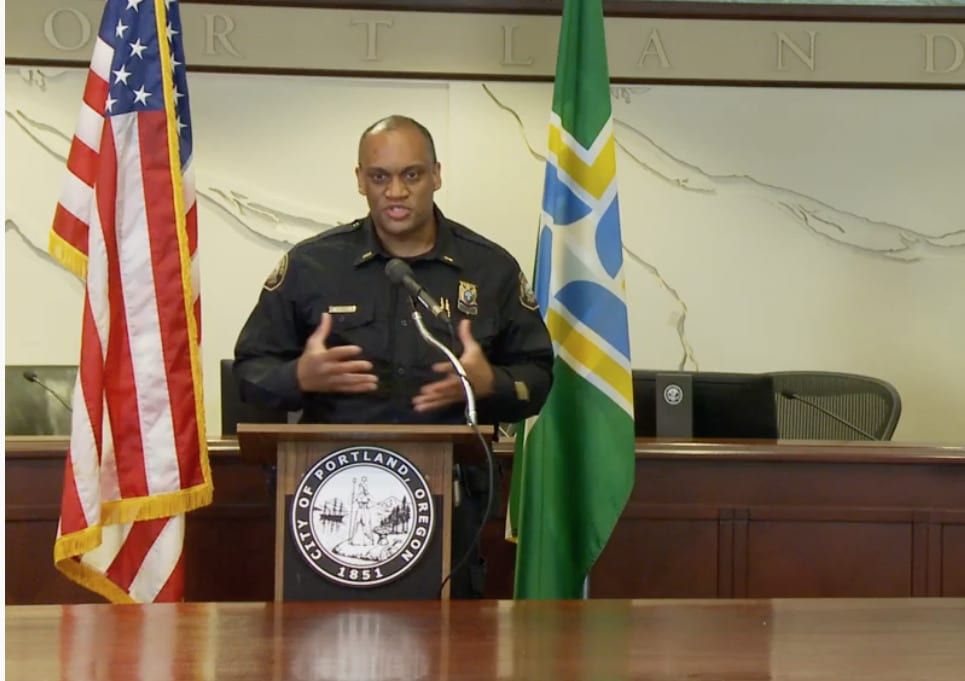 For his part, the new police chief, the third African American chief in Portland, acknowledged in humility that he will listen to the “feelings” of the black community in Portland.

“This is going to be hard. I don’t have any illusions about that. But meeting up every day at revolutionary square and marching into downtown Portland, standing up against injustice, that’s hard too.”

Oh, this guy’s going to be perfect for the job woke Portland claims it’s always wanted.