Mayors and governors across the land have run to the cameras and microphones to be among the first to kneel in supplication to the riotous mobs in the streets.

These are just two examples of America's demented, that are actually kneeling and surrendering to their CAPTORS. The first is LA Mayor Eric Garcetti, and the second is a group of OUR National Guard members. These are pathetic and submissive displays! What the hell is going on? pic.twitter.com/D6PCQpMdg2

They eagerly do what the Leftists at Black Lives Matter (BLM) and George Soros call for, such as defunding police departments. They call for rule changes so that cops are defanged in the face of riotous antifa and BLM mobs.

This follows George Floyd’s killing at the hands – knee – of Minneapolis police officers, who have been fired and charged with crimes.

Naturally, these “leaders” assume the officers in their departments are equally capable of committing these acts. They promise to do better! Unsaid is their plaintive appeal, “Don’t hurt me. Pretty please?”

The LAPD union delivered a broadside against Garcetti over his remarks Thursday in South L.A. “He smeared every single police officer in Los Angeles and across the nation by calling us killers," said one @LAPPL official https://t.co/keTYEFhzGH w/@dakotacdsmith

As a result, chiefs of police, mayors and governors are going back over their training manuals, as they have so many times before, to find something to change in order to mollify the mobs.

But, the most disturbing, obsequious, disgusting move is the one Los Angeles Mao-yor Eric Garcetti pulled in front of black leaders Thursday at the First AME Church. Seated behind Garcetti was Police Chief Michel Moore and sitting next to Garcetti was LA County Sheriff Alex Villanueva. 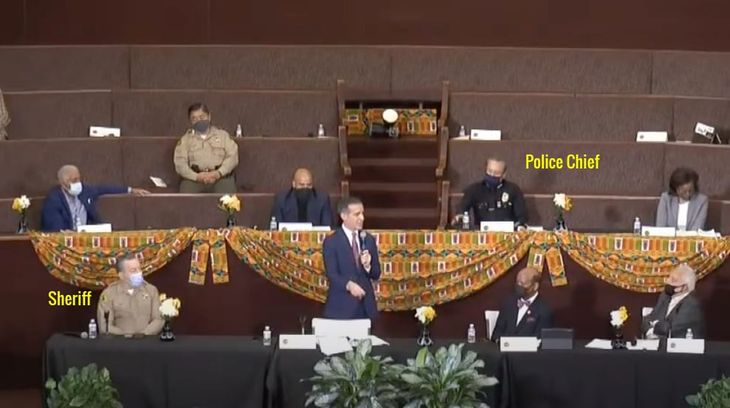 Garcetti: His Police Are ‘Killers’

Garcetti discussed his “defunding the police” plan of reducing the police funding by $150 million and moving another $100 million from other city budgetary priorities to hand over to the mobs for special placative programs.

Toward the end of a short speech, Garcetti outlined eight ways LA has already changed up the way cops operate. He lobbed bombs against President Trump, calling him a “political pyromaniac.” He repeated provable lies about how the Park Police used tear gas to clear a path so that Trump could get a photo op with a Bible – a shot that was met with nods of approval, Garcetti said:

I’ve gotten calls from all over the country from mayors who say I’m so excited to others saying what the hell did you do, now I’ve gotta shift money. That’s exactly the point. It starts someplace and we say we are going to be who we want to be or we are going to continue to be the killers that we are.

His libel against LA cops was met with “Amens!”

The LA police union had a different reaction. They called Garcetti “unstable.”

The LAPD is calling for @MayorOfLA to be removed from officer due to mental illness after Garcetti called all cops in the country "killers."https://t.co/cgvOnAXNF3

The director of the Los Angeles Police Protective League, Jamie McBride, responded to Garcetti in a press conference live-streamed on Facebook under the headline, “LAPPL Requests Crisis Intervention Team to be Dispatched to Help Eric Garcetti”:

We are honestly concerned about his mental health, and I think that he should seek some help, and maybe have someone to talk to, a counselor or something, and reflect on some of his decisions, reflect on his ability to lead the city and keep the citizens safe.

After the police union said its piece, Garcetti doubled down on the “killers” remark saying it was “misunderstood.”

That’s mao-yor-speak for “kneel, serfs and capitulate or you are ‘killers.'”

Just two weeks ago, mayors and governors across the land were lauding their first responders for keeping the peace during COVID.

Those days are over. The mob has spoken. Cops are canceled.