Riots Are Part of Weeklong Campaign to Defund Police. In Some Places It's Working.

The sickening murder of George Floyd by Minneapolis police has supercharged an already existing effort by radical Leftists to defund police departments across the country. Defunding police departments is part of the Left’s effort to deconstruct American institutions that enforce ordered societal norms.

It’s the same idea behind the Boycott, Divest, Sanctions (BDS) movement of defunding Israel. Hating Israel is one of the tenets of this Leftist mob.

They so state in their literature left behind at riots and planned civil unrest, like this one from the anti-Kavanaugh protests in 2018. 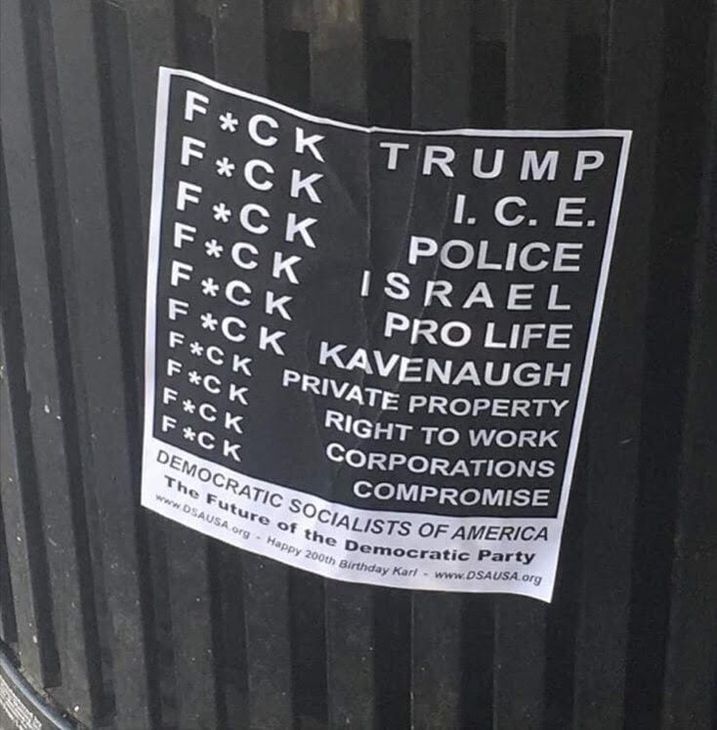 Bad actors in antifa and the most radical elements of Black Lives Matter are exploiting Floyd’s death to sow chaos. In 2015-2016, it was open season on cops. Who can forget when a Black Lives Matter activist and nut started shooting police officers at a Dallas protest. Twelve officers were hurt and five were killed.

And, in the current riots, police officers are targeted again. Several have been killed or wounded by organized Leftist rioters.

Police Are Targeted During Riots

Reaction to Floyd’s murder started as a righteous cause and devolved into riots, looting and mayhem.

As Attorney General Bill Barr remarked on Thursday, many bad actors showed up to start violence, including foreign actors. He says 22 cops were sent to the hospital and 114 were injured in the riots around the White House alone.

The effort to “#DefundPolice” has been underway for awhile. This week is a “week of action” to “Defund Police.”

The “Movement for Black Lives” says its “organizers [are] mobilizing across the country” to participate in the “week of action.”

The M4BL with organizers mobilizing across the country, invite you to take part in a week of action from June 1st to 5th in Defense of Black Lives. This is an opportunity to uplift and fight alongside those turning up in the streets and online.#DefundPolice #DefendBlackLife

The M4BL with organizers mobilizing across the country, invite you to take part in a week of action from June 1st to 5th in Defense of Black Lives. This is an opportunity to uplift and fight alongside those turning up in the streets and online.#DefundPolice #DefendBlackLife pic.twitter.com/bYjjdESiLh

Defund the Police Or We’ll Call You a Racist

The message is getting through to the far-Left mayors around the country. Los Angeles Mayor Eric Garcetti agreed to cut $150 million from the LAPD budget, but activists demanded he defund the police department by 90%. Not a typo.

Garcetti wants to increase training for cops to de-escalate tense situations, such as riots, but is cutting the budget and giving more money to other social programs demanded by activists.

Those cities, not surprisingly, are also the cities in which we’ve seen riots. What a coincidence.

What good is rioting, looting, and undermining our country’s guard rails, such as police, if you can’t do so with impunity?

Look who says she’s a leader in the effort. One of AOC and Ilhan Omar’s wingmen, Congresswoman Rashida Tlaib.

When we say #DefundPolice, what we mean is people are dying and we need to invest in people's livelihoods instead.

This is systemic oppression in numbers. pic.twitter.com/oPe0GD3D6p

Police Are Not a Murderous Gang

In a piece called the “Myth of Systemic Police Racism” in the Wall Street Journal this week, researcher and author Heather Mac Donald, of the Manhattan Institute, laid out why the Left’s arguments about police shootings aren’t supported by the facts.

[I]t isn’t representative of the 375 million annual contacts that police officers have with civilians. A solid body of evidence finds no structural bias in the criminal-justice system with regard to arrests, prosecution or sentencing. Crime and suspect behavior, not race, determine most police actions.

In 2019 police officers fatally shot 1,004 people, most of whom were armed or otherwise dangerous. African-Americans were about a quarter of those killed by cops last year (235), a ratio that has remained stable since 2015. That share of black victims is less than what the black crime rate would predict, since police shootings are a function of how often officers encounter armed and violent suspects. In 2018, the latest year for which such data have been published, African-Americans made up 53% of known homicide offenders in the U.S. and commit about 60% of robberies, though they are 13% of the population.

How Far Will Anti-Law and Order Plans Go?

In California, anti-law and order plans are well on their way. In the name of justice reform, governors, lawmakers – and voters – have implemented programs to reduce the number of inmates in prisons and jails, reduce certain felonies to misdemeanors, and will vote on getting rid of cash bail this November. Now the same people who pushed those programs don’t even want to have cops on the street.

It’s as if these people believe that if we just get rid of police and jails, which are the consequences for our bad actions, that man’s inhumanity to man will somehow disappear. Or devolve into chaos.

George Soros’ groups have successfully run operations to fund radicals to run for secretary of state, attorney general, and district attorney – which, next to churches, oversee the very heart of ordered civil society, the vote, and your fundamental safety.

Gee, it’s as if this were planned or something.

The George Floyd Riots: Where’s Black Lives Matter When You Need Them?