At this time when cops are taking knees in supplication to the mobs and rioters are in the streets, there’s one question I keep coming back to. No, it’s not the existential question of the day. It’s this: who was that hero security guy in Seattle? Who was “Shaft,” as I dubbed him? What’s his story?

Information about the man and the crazy atmosphere on May 30 in Seattle are much clearer today.

We already knew the guy was a hero. Watch the video in the following tweet if you doubt it.

Crazy! Guy finds what looks like AR-15 in busted up police cruiser and gets gun pulled on him immediately. #seattleprotest pic.twitter.com/fXAvB9Wkzo

But after hearing him tell his story, we now learn that things were far more harrowing and scary for him and the people he was hired to protect—a TV news crew.

As I wrote just a week ago:

[a] bandanna wearing antifa dirtbag … stole an AR-15 type rifle from one of two smashed up police cars. The cars, one of which was burning, was tagged with the Left’s favorite anti-cop epithet ACAB – All Cops Are Bastards.

Knowing antifa’s thuggery and how cops are too busy to protect anyone,  one TV news station had the foresight to hire what they called a “security guard.”

This was no mall cop.

George Orwell famously said “People sleep peaceably in their beds at night only because rough men stand ready to do violence on their behalf.” And thank God a Seattle TV station hired one.

As the mayor ordered police officers and National Guard troops to corral the protesters, fetch them water and and cut their meat for them, there was this guy.

Q-13 News confirms that it hired Shaft (above) who looked like he was two parts top security professional and one part raw nerve.
.

That wasn’t the half of it.

What we suspected, but couldn’t confirm during the Seattle riots last Saturday, was that antifa rioters got a hold of two police AR-15 rifles from inside locked police cars and started firing. Four rounds were fired into an empty police car.

Hero Is a Retired US Marine, Stopped an Active Shooter

An eyewitness says he heard shots and saw one of the masked males shooting the rounds into the police car. Holes were seen in the side of the car. 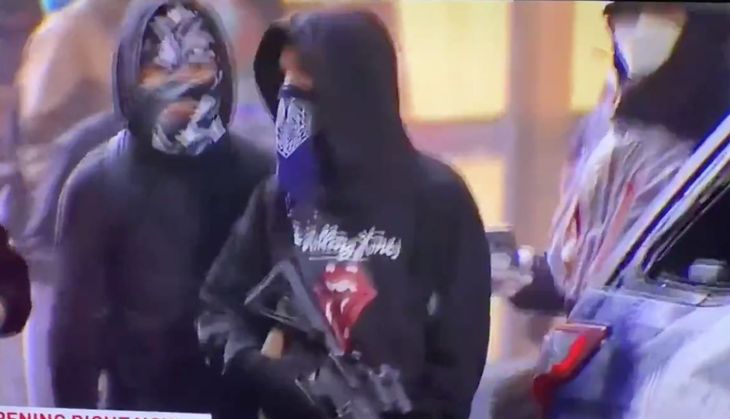 Shaft has a name but I’m not saying it. We know what the rage mobs will do to him. But he does have an Instagram account under the nom de plume @_Shooter_Rughi_.

This just got sent to me through a close personal friend over at @osokapparel This one i haven't seen. Go give him a follow and check out his store. Amazing products by an amazing former Army Sniper and Instructor. To everyone out there that's reached out and I havent gotten back to yet I will. There is just so many! Its amazing! As posted before, the support is 1,000,000x better than I was expecting. I was very hesitant at first. I have had many questions about the business I am starting. It literally is a fetus right now but I'm close to getting it launched I hope. The timing is remarkable. I'll be posting a short video later tonight, nothing I've ever done before so I guess stay tuned for it. Again! NOT SF. at all. #2a #usmc #0311 #BangBagsCo #professionalengagements #feedmefightme #stoprioting #osokapparel

Shooter nee Shaft recounts his story of heroism, not that he calls it that, on his Instagram page.

He pulled his Glock, put it at high-ready, and fluidly moved to the d-bag armed with an AR-15. Then he took it.

Shooter owns his own fledgling company and works security on the side. He is a veteran of the U.S. Marine Corps and was a sharpshooter. He obviously keeps up with his skill-set.

719yds with a @team_springfieldarmory M1A NM rifle in a @mcmillan_stocks M3A adjustable stock. Topped off with @nightforce_optics ATACR 4-16 FFP MilR reticle that brings the steel nice and close. I've always shot @federalpremium SMK 168gr BTHP factory ammo and it has never failed me once. Quarantine has me itching to get back out and ring some steel. #longrangeshooting #oggasguns #pnw #308 #0311 #pewpewpew #2a #usmc

Hero: ‘The Character of Some Americans Is Disheartening’

What Shooter told Mickey Schuch of the “Higher Line” podcast was positively stunning.

Here’s how he described what occurred during the active shooter takedown at the May 30 riot in downtown Seattle.

He said he thought a lot about what his role would be as he drove to his security gig. He was trying to blend in and not engage.

I was trying to do the whole gray man theory. Slip in and slip out with no one noticing and get through the day. So that involved me walking through the crowd and chanting. I had magazines at my side.

He wanted to simply protect the reporter and crew and keep things peaceful, which is why when he smoothly took the gun away from the antifa shooter and disarmed it, he didn’t take the weapons for his own use.

So I did what I did and I stuck with the weapon that I knew was reliable, my Glock.

The incident left him “disheartened.”

Shooter could have legally taken out the masked antifa guys holding the guns.

The second they had their hands on that firearm I was already within my legal limit to stop the threat with whatever force I had.

I’ve always trained for overseas, but do I really want to take American lives? No.

The video that we see above of the takedown began rolling right after the active shooter got done shooting four rounds into the cop car. The Marine told Schuch that “everyone that you see in that video and hundreds more, were now on me.”

They were threatening my life they were coming up to me telling me they were going to kill me kill my cast [TV news crew from Q-13].

But things got worse, if you can imagine it.

I wanted to get the crew out of there. [But] I just drew a line around myself that told everyone that just told hundreds or thousands of people around me that I’m not with you, I don’t agree with you.That I am here for other reasons and I’m here to do what’s right and you just stay away from me.

I was just trying to create space to get my team out of there.

And here’s how he did it.

I was drawn at the high ready for three and a half to four blocks after that [to get his crew out of there]. I was getting my people out. Rifle slung. With people on me and all the time I’m encountering new people that don’t know what’s going on as we’re on our way.

Against All Odds. #iD

This is what Shooter did for four blocks in downtown Seattle amid a mob that hated him. It was four blocks before he saw a cop. Now imagine this on an American city street. That happened last weekend in Seattle to keep people safe.

He said that he endangered his crew’s lives because of his takedown of antifa, but he had to stop the gunmen from firing off more rounds and possibly killing people.

He says the media reaction has been one of disbelief that antifa shot anything up. He says gunshots weren’t the loudest things being heard that day. Antifa has fireworks and the cops used flash-bangs. It’s understandable that the media would have missed the gunshots.

His story of getting the guns back to the cops isn’t one he’s willing to share at this point. That sounds like it could have been a very sticky situation. After all, you don’t just walk up to strapped riot cops with a gun in your hand or even a “Glock it in your pocket” and rifles slung over your shoulder and not expect some, uh, reaction.

As for the bad guys, Shooter says he knows the cops are investigating the gunmen. It’s tough to ID someone with a mask over their face, which, of course, is the point of donning “black bloc” attire and garb.

In the podcast (below) Shooter said he believed George Floyd would not have wanted this violence and rioting done in his name.

I feel like it’s safe to say that [George Floyd] would not have wanted that. So don’t disrespect someone’s memory by acting on your own selfish, materialistic, unguided and uneducated needs and wants.

And he had one more word for antifa and violent Black Lives Matter rioters: