It’s hard to imagine that the forlorn bunch of angry-on-demand mopes in the far-Left would be able to tolerate Chris Rock’s material – much less his old stuff.

Rock has applauded Jerry Seinfeld pulling back from college campuses because the new woke college kids are such a bunch of humorless navel-gazers who would likely chase him off campus waving antifa torches and tossing Molotov cocktails.

Seinfeld Is A Respite From The Insufferable Wokeness Of Comedy https://t.co/w1Y5YtPdqw. Thank God for Jerry.

Rock and the ‘Woke’ Crowd

Rock has done nearly everything in show business, including hosting the Oscars. The comedian burst into widespread public consciousness in the late 1990s with controversial material that held black criminals in equal contempt with white racists. He plied his trade doing hilarious star turns on The Daily Show as a presidential campaign correspondent looking for haircare products in Iowa or some such place.

But the woke crowd should take a chill pill and watch Rock’s take on his “How Not to Get Your Ass Kicked by Police” sketch from his old TV show, The Chris Rock Show.

Police brutality isn’t funny, obviously, but Rock takes on the ridiculous behavior people engage in when stopped by police that could get anyone into more trouble than they already are.

The sketch is meant to convey your rights but also your responsibilities as a citizen.

Rock: ‘How Not to Get Your Ass Kicked by the Police’

It seems like an entire generation of kids has learned all about made-up rights –  ‘rights’ to proper food in the dorms, the ‘right’ not to hear messages that they don’t like in a classroom, and a ‘right’ not to be offended.

They’re coddled, uptight, mean bigots. Just look at the crazies at CHOP in Seattle or the radicals tearing down statues of Abraham Lincoln and George Washington if you doubt it.

While Rock’s advice is hilarious and on point, here are some serious things to consider when a cop stops you.

First, screenshot this card given to me by Oregon defense attorney Jason Short. Have it with you. Or if you feel more inclined, print it and put it in your wallet or phone case. 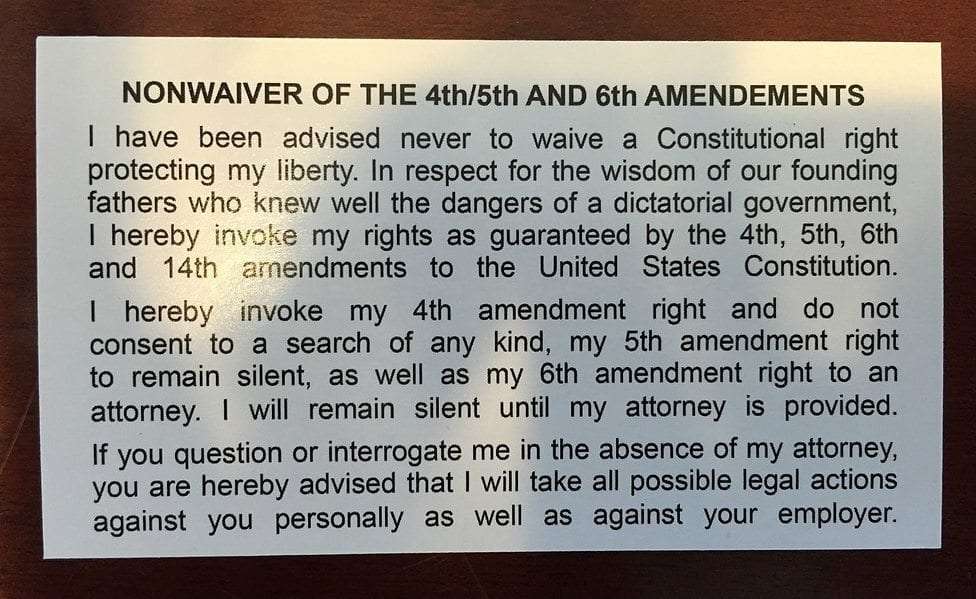 In short, it says you do not waive your 4th (search), 5th (right to keep silent), 6th (right to an attorney) or 14th Amendment (due process) rights because your attorney would be very angry at you. And he would

I find that the more people know their actual rights and responsibilities the less likely they are to make stuff up and make jackasses out of themselves.

So, without further ado, here’s some good advice, compliments of Chris Rock.

Send this to someone who needs to hear it.