Riots should not happen. When they do, they deserve condemnation.

This was the eerie night scene in our nation’s capital. 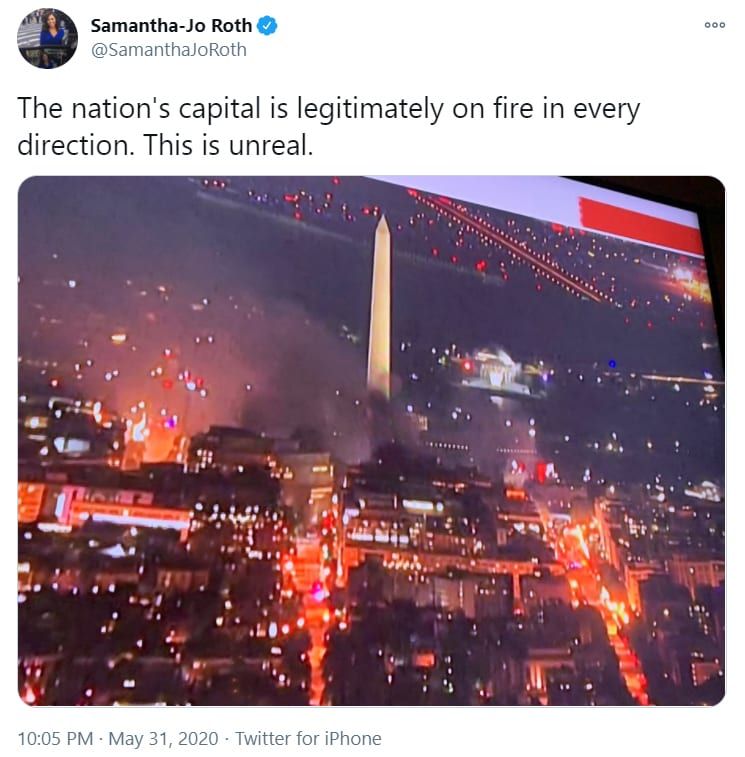 Note the date. It was not January 6, 2021, but May 31, 2020. The death of George Floyd in Minneapolis police custody, captured on heinous video sparked riots despite his own family’s impassioned pleas for peace.

The night of May 31, rioters set fires all over the capital of the United States. A mob of them gathered outside the White House and threatened to storm it. The president was said to have been moved to a bunker. Many on the left laughed at him and supported the mob. Never mind that the safety of the president, as a symbol of America and self-governance, goes beyond individual or party and should never be a laughing matter.

The weeks and months that followed included attacks on our nation, calling it “systemically racist,” and on symbols of our system of governance. Where did people think this would lead?

Did those who justly condemn Wednesday’s violence as un-American likewise condemn the relentless insurrectionist attacks on America that played out across the second half of 2020?

These attacks were not just in places like Portland and Seattle. In St. Louis, retired cop David Dorn was murdered by rioters on live video. The capitol of Texas was even vandalized during the riots, after which police were condemned for restoring order. The Austin city council later defunded the police, slashing a third of its budget. What did they think would happen?

We covered all that here, and condemned it. As the riot season got into full swing, I predicted that should cities go down the defunding path they were on, they would become far more violent and put their citizens at risk. They did.

Other things were happening at the same time. The nation had suffered the health and economic impacts of the pandemic. Millions were out of work, frustrated, terrified that everything they had worked for was being drained away through no fault of their own. They weren’t allowed to visit family, go to church, mourn their dead, speak up, or take their kids to the park without risking arrest. Civil rights nearly disappeared. Democrats changed the election rules in a handful of states, setting the stage for later doubts about the fundamental integrity of our elections.

Meanwhile, cities and counties controlled by Democrats were releasing criminals from prisons. What did they think would happen?

Locked-up citizens were being told that the nation they love is irredeemably racist. As the summer unfolded, insurrectionist rioters attacked symbol after symbol that stood for America.

Consequences were playing out on the ground nationwide.

After its first round of defunding police, the Minneapolis city council advised residents to just do what criminals tell them to do. What did they think would happen? Violent crime and carjackings surged.

Seattle allowed rioters to take over its capitol area neighborhood and temporarily break it off from the United States. They called their temporary country the Capitol Hill Autonomous Zone, or CHAZ, and soon set about creating their segregationist, socialist, secessionist utopian society. It didn’t take long for the lack of law enforcement to manifest in murder and mayhem. But CHAZ was a leftist secession, so few cultural elites rose up to condemn it. Mayor Jenny Durkan only began to see CHAZ as a problem when it spilled out into protests on her own lawn. Some of us were condemning it well ahead of that, from a thousand miles away, because what CHAZ was trying to do was wrong and un-American. CHAZ wasn’t a game, it was an insurrection.

Portland’s Mayor Ted Wheeler let his city burn, like a neo Nero, because in his trust-fund mind it “had nothing to lose.” He allowed antifa to try to burn down the federal building there, which among other things is a symbol of America. He condemned Trump for offering federal help. Protesters he had marched with drove him from his own home. Media never asked him about the businesses and homes being burned, the citizens who were losing everything. Just a couple of days prior, antifa rioters wheeled out a guillotine to graphically show what they intended for their political opponents. They also burned an American flag, a sight that became nearly as common as a sunset across 2020.

Wherever antifa rioted, they nearly always burned American flags. They burned an American flag in Austin and jeered when police replaced it with another one. They attacked federal buildings. They vandalized state capitols. They toppled statues of past Americans, and not just Civil War generals. They attacked American history and its foundations.

They toppled Ulysses S. Grant in San Francisco. Grant defeated the Confederacy, hated slavery, and de-segregated the federal workforce. That didn’t matter. They toppled him as a symbol of America.

They also toppled Francis Scott Key, author of the national anthem. His statue was a symbol of America.

They toppled and burned George Washington in Portland. He was our first president, the hero of the Revolution that kicked off the spread of democracy worldwide, and the man who had the good sense to serve two terms and then leave power to others. That didn’t matter. They toppled him as a symbol of America.

They went after less famous symbols of America. In Philadelphia they toppled the statue of abolitionist Matthias Baldwin. Why? Probably out of ignorance, not knowing that he stood against slavery, but mostly because they believed he was a symbol of America and was white and male.

Rioters damaged a statue in Boston to the 54th Regiment from the Union Army in the Civil War. That all-black regiment directly fought for freedom for themselves and untold others. Many of them died at the Battle of Fort Wagner. That didn’t matter. Antifa rioters defaced their statue anyway, as a symbol of America. The cultural revolution marched on.

In September, two Los Angeles County sheriffs deputies were ambushed and shot. Black Lives Matters activists celebrated and blocked entrances to the hospital they were taken to for recovery. Why were the deputies attacked? Well, in the language of antifa, ACAB — “all cops are bastards.” The activists’ verdict on the deputies: “We hope they die.”

Even Elvis didn’t escape antifa’s wrath. Neither did black-owned businesses in Dallas and other cities.

District attorneys in the riot-torn cities systematically refused to prosecute the rioters. They set them free to riot again. What did they think would happen?

It didn’t have to be this way. None of this had to happen. When the riots started in earnest on May 31 and June 1, as violence and flames swept through predominantly black neighborhoods, their residents cried out for protection. They called for the police and the National Guard to intervene and save them.

They were mostly ignored, not out of racism, but out of fear. Mayors and city councils by then were swept up in “defund the police” and were only listening to the woke, to BLM, and to radical activists aligned with antifa. They condemned neighborhoods in their own cities to destruction. Had the riots been stopped there and then, we would not have suffered a summer of violence during which symbol after symbol of America was attacked, toppled, burned, and defaced. Real local leadership at the beginning could have prevented all that violence.

And it could have prevented what happened in Washington on January 6, too. Whoever instigated that violence, which may well have been Trump supporters, it didn’t happen in a vacuum. Trump’s actions and speech were unwise and inflammatory. He put his vice president in an unconstitutional position. He promised election security reforms that a president cannot deliver. He promised victory that was not going to happen. The violence that spread across 2020 was explicitly insurrectionist. It explicitly condemned America itself as “systemically racist.” It specifically targeted symbols of America and, in attacking businesses and homes, the American dream.

Biden was silent for months, but later dismissed antifa as just “an idea.” Kamala Harris raised money to bail rioters out of jail. She said the riots should continue even past the election.

Where did people think the course of 2020 and the relentless attacks on America would lead? Where did politicians’ and media’s coddling treatment of the riots lead? 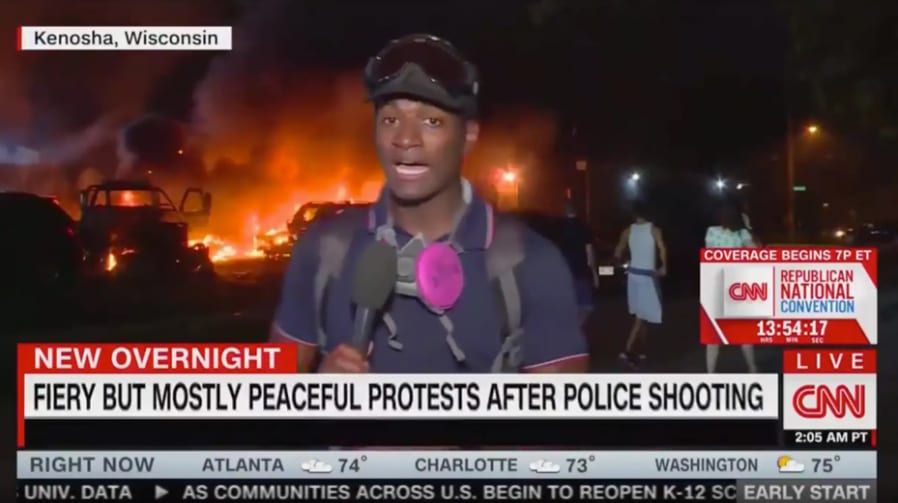 CNN's Chris Cuomo: "Please, show me where it says protesters are supposed to be polite and peaceful."pic.twitter.com/9Rmfh7LV8M

The First Amendment, written by founders the culture now condemn while also insisting we all abide by the “systemically racist” system they set up, which many of them simultaneously work to topple and destroy, says:

Congress shall make no law respecting an establishment of religion, or prohibiting the free exercise thereof; or abridging the freedom of speech, or of the press; or the right of the people peaceably to assemble, and to petition the Government for a redress of grievances.

That amendment suffered grave damage across 2020. Will it survive 2021? Or will insurrectionist acts be used to destroy this foundation and symbol of America, too?

Who Speaks for the Riots’ Victims?