According to Bloomberg, at least 16 major U.S. cities are either considering defunding their police departments or they already have. Those cities include:

Several of these cities — Baltimore, Washington, Chicago — already have violent reputations they deserve. Several of these cities, including Minneapolis, Austin, and Los Angeles, have either already voted to defund their police departments or even disband/”reimagine” them, as is the case in Minneapolis. That city is where the anti-police hysteria began, in the wake of the police killing of George Floyd, and the riots that started there after peaceful protests turned violent as Mayor Jacob Frey failed in his duty to protect the city.

These cities all have at least one thing in common: They are run by Democrat mayors and Democrat-dominated city councils. The mainstream media never point this fact out. The Washington Post did recently try to argue that the nation’s Democrat-run cities are not also the nation’s most violent cities, but they ended up dunking on themselves and their Democrat allies with this handy chart, which you should share with your liberal friends. 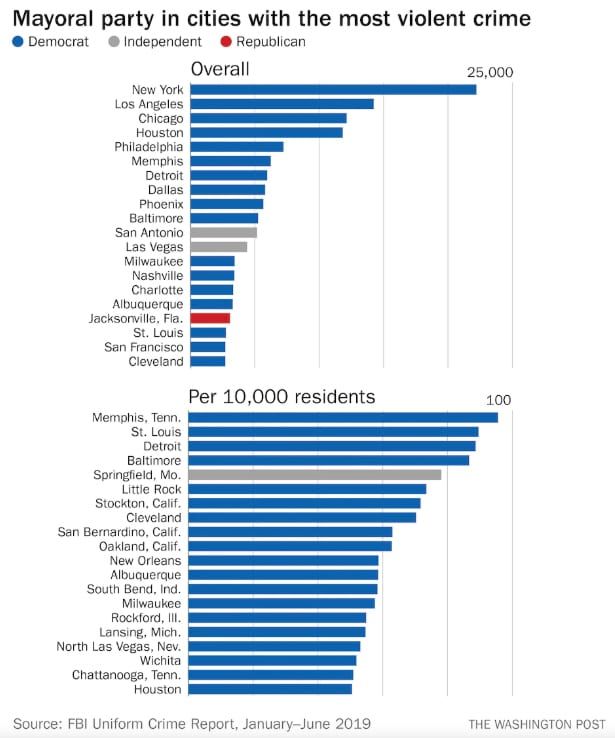 Washington Post chart on crime, cities, and which party dominates those cities.

To put the chart above in stark terms, if you live in a city run by Democrats, you’re far more likely to become a victim of violent crime. And if that city defunds its police department, those odds will increase.

The chart above is also misleading in one way. San Antonio’s municipal elections are nominally non-partisan, but its mayor is a liberal Democrat as are most of its city council members. Philosophically San Antonio belongs in the blue column.

From 1994 to early 2020, you were less and less likely to become a victim of violent crime in most of those cities. That’s changing now. New York is experiencing a shooting and murder surge. Chicago has tended to buck the national trend and remain hyper-violent. Baltimore…is Baltimore. That tragic city could be a national gem but it’s too violent and corrupt.

What might have changed between 1994 and the present that accounted for decades of decreasing violent crime? Ask the mainstream media and they almost come up with an answer.

Even as crime has fallen across the country, police and public safety have consistently made up an average of 3.7% of state and local spending, a Bloomberg Businessweek analysis of Urban Institute data found. Since the 1970s, spending on police has nearly tripled, reaching $114.5 billion in 2017.

That’s just the headline. The story includes this nugget:

American society has not settled on what that number should be — how much of a priority the police ought to have, alongside schools and parks and housing and health care. But the police share of spending has grown over the past 40 years, even as cities have become far safer.

…even as cities have become far safer. The Times (which belongs on the scrapheap of history) makes it sound like spending more on police should lead to increases in crime.

That’s also just the headline. But we’re seeing a pattern. Media appear incredulous that there just might be a connection between increasing police budgets and decreasing violent crime. Politico’s story does better than most, but it still makes a somewhat unreasonable case that city police spending should have tracked in lockstep with decreasing crime rates when what many cities needed was a surge in funding to put more police on the streets to decrease violent crime more quickly.

Police budgets mean personnel. About 95% or so of most police budgets go directly to salaries and benefits. That spending could be made more manageable by getting rid of public-sector unions, which tend to demand more and more of cities, and defeating them at the collective bargaining table. But that’s not usually what “defunding police” means. Cutting police budgets by 10% or more, as some cities are now contemplating, will mean those cities will have fewer officers on the streets, fewer officers to investigate crimes, and fewer officers across the board.

In the case of Austin and presumably others, defunding will mean burning the police department at both ends — older officers will retire or be forced into retirement, and at least one cadet class will be delayed. The APD will suffer a brain drain on the top end and an energy drain on the other — and it’s already about 200 officers short of full strength.

If this all sounds familiar, it should. We as a nation increased police funding because violent crime was rising about 5% or more per year, year on year, from the 1960s to the mid-1990s. Violent crime became an issue in presidential elections. Democrat Bill Clinton rose to the presidency in 1992 in part by rejecting his party’s permissive criminal justice policies.

Increasing police funding in the mid-1990s reversed that trend and was so effective that by 2018, violent crime had dropped sharply from its high in 1994 and crime had receded as a national issue:

We’re in a moment of national hysteria as the killing of George Floyd, the unprecedented coronavirus lockdown, and extreme unemployment are affecting our entire society. Defunding police is probably the worst thing cities can do at the moment. It will put trained police officers out of work when they could help restore and keep order. It can be expected to lead to sharp increases in violent crime in cities across the nation. Our country is likely to pay for these poor and hastily made choices for years if not decades to come, in the form of rising violent crime, population shifts away from cities, and other less predictable effects. And cities are making these rash decisions despite the fact that the majority of Americans do not support defunding the police.

One obvious outcome we can expect is that people will die at the hands of violent criminals, tossing the Democrats’ “If it saves one life” mantra right out the window. Defunding the police will end many lives. Democrats are leading and voting for defunding.

But don’t expect the media to ever make the connection between police funding, the number of police officers, and their impact on crime. The MSM appears to go out of its way to hire people who either can’t or won’t add up 2+2.

Bryan Preston is the author of Hubble's Revelations: The Amazing Time Machine and Its Most Important Discoveries. He's a writer, producer, veteran, author, and Texan.
Read more by Bryan Preston
Tags: CRIME