RNC Finishes With a Bang

The warmest of #TGIF greetings to you, dear Kruiser Morning Briefing friends. We’ve got a full one today.

The final night of the Republican National Convention (RNC) exceeded expectations. They weren’t low expectations either. After being pleasantly surprised by the first three nights I was actually looking forward to the finale.

Everything that I mentioned yesterday was working and working even better on Night 4. There was the standard political fare, along with a couple of powerful speeches. The first one was from the widow of David Dorn, the retired police captain who was killed by “mostly peaceful” looters in one of the Barack Obama legacy anti-cop riots. The other tear-jerker came from the parents of Kayla Mueller, the aid worker who was killed by ISIS in Syria.

The opening acts didn’t last very long last night. When Ivanka Trump showed up as early as she did we all knew that POTUS intended on speaking for a while. Her introduction of her father was, of course, flawless.

Much to the chagrin of every liberal in America (although they won’t admit it), there was a huge crowd gathered outside the White House to hear the president’s closing act. The backdrop was magnificent. Again, the production value for every night of the RNC was impressive.

I was curious as to what kind of speech Trump would give and I have to admit that what I saw was completely unexpected.

We are all aware of the president’s love for extemporaneous speaking, which he is very good at. We don’t see him on a tight script very often. Who knew if he would get bored with it halfway through?

The speech was the biggest surprise of this presidency for me thus far, and it has been filled with surprises.

It was, in two words, extremely presidential. The media is lying about it already, of course, claiming that it was a dark speech that attacked Biden. It’s as if they are unaware that one of the primary tactics in any election is for the candidates to say unflattering things about one another. They’re being absolute children and it’s becoming more tedious than ever.

While he did tout his accomplishments — another normal campaign tactic which the press is pretending Trump invented — he didn’t do it with the signature Trump bombast. He took everything down a notch.

There were plenty of barbs aimed at all the right people, but he took a lot off of his fastball and struck them out with a change-up.

I fully expected him to wind things back up for a big finish but he spoke very solemnly at the end, which made the conclusion hit home even better.

This was the magnificent speech that the MSM hacks were telling America that Biden gave last week. This was the speech that Trump needed to give to capitalize on the bit of momentum he’s picked up in the past couple of weeks.

It’s easy to see why the Dems were running around barking “Hatch Act!” like scared chihuahuas all week. That speech with that backdrop was light years beyond that hostage-situation video that the DNC ended on last week.

The Democrats and their flying monkeys in the mainstream media will no doubt overdose on denial about how good this speech was, but that’s to Trump’s advantage.

As soon as the speech was over, we were treated to the most magnificent fireworks show I’ve ever seen. I kept thinking one thing while it was going on:

These fireworks are the greatest trolling of DC Dems that we will ever see. #RNCConvention2020

Victoria has more on the president’s speech and some of the reaction here.

It’s game-on now. The real campaign is beginning. It should be fun.

ICYMI: Here is the full RNC replay. POTUS’s speech begins near the 2:02 mark. Stay for the fireworks.

Add this to the list of everything that is awful about 2020. My hometown is going to be in mourning for a long time now. Lute Olson is revered here in ways that are difficult to describe. Not only has he died during this already God-awful year, but the stupid plague and the dumb distancing panic will prevent him from being properly memorialized now. Someone tweeted me tonight that the football stadium would be overflowing for a proper memorial service for Lute. Great coach. Great man. He will be missed.

It turns out protestors like fireworks, too. All the chanting, shouting, etc has stopped. Everyone is watching. pic.twitter.com/MFR2HBl7jg 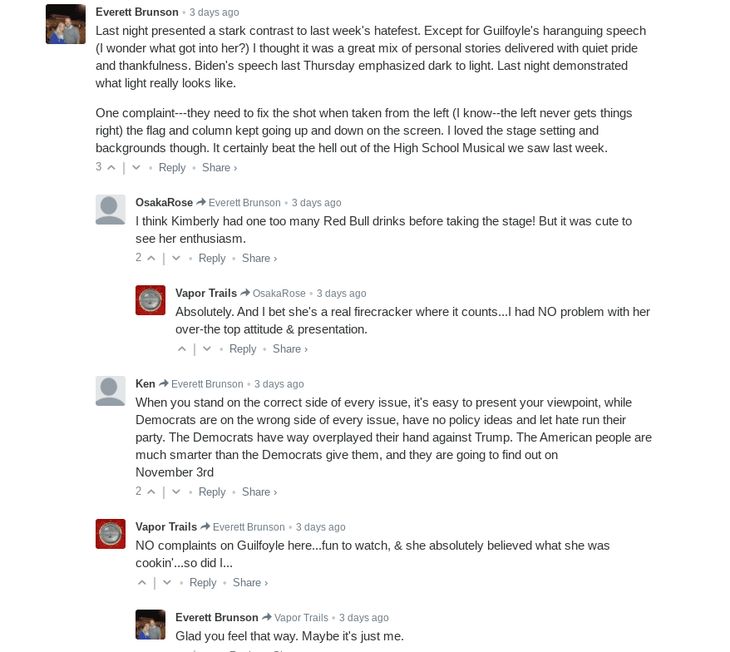 My latest column. The Biden 2020 Message: Republicans Are All Racists, Now Let’s Unite!

The Next Nick Sandmann? Defamed Covington Kid’s Lawyer Takes Up the Case of Kyle Rittenhouse

#ReligionOfPeace Update. Texas: Muslim Who Honor-Murdered His Two Daughters is Finally Caught, and the Denial Begins

#EnemyOfThePeople Update. Media Making the Story About Kenosha Shooter, Not the Riots

VodkaPundit: Insanity Wrap #37: ‘Fiery But Peaceful’ Is a Thing Now

VodkaPundit, Part Deux: Pelosi Comes to Slow Joe’s Rescue: ‘I Don’t Think There Should Be Any Debates’

Revolt at Chamber of Commerce Over Endorsement of Democrats

The NBA Is Done

It’s All Over for the Democrats but the Crying

‘We Are the Firewall Against Nancy Pelosi’s Agenda’: McConnell Previews What’s at Stake in November

The choice is clear. WATCH: Protesters Denounce Police Outside White House Ahead of Trump Speech

Violent BLM Mob Attacks Rand Paul, Others Outside of the White House

How Wrong Has Biden Been on Foreign Policy Decisions? Cotton Reminds Viewers During RNC Speech

Chaos Is Contagious. Can We Find A “Vaccine”?

Enough With The Soundbite Solutions To Violent Crime

Details Revealed In The State Vs. Kyle Rittenhouse Criminal Complaint

My old school. University Of Arizona Used Wastewater Testing To Stop A Possible Coronavirus Outbreak In One Of Its Dorms

Duh. Politico, Washington Post: The Trump Administration Is Seizing On The Unrest In Kenosha (Update)

The Baltimore Ravens Release a Statement, Try Their Hand at Criminal Investigation and Legislation

The Media And The Violent Protesters Have Something In Common

‘This is incredibly insulting’: Politico gets hammered for ‘propped up’ spin on Alice Johnson and her Republican convention speech

All leftists have daddy issues. Effigy of President Trump ‘executed’ with a guillotine outside the White House

March: “I’ll try to eat healthy until this is over.”

August: “Let’s see how long I can live off of just salami, peanut butter, and beer.”

PJ Media senior columnist and associate editor Stephen Kruiser is a professional stand-up comic, writer, and recovering political activist who edits and writes PJ's Morning Briefing, aka The Greatest Political Newsletter in America. His latest book, Straight Outta Feelings, is a humorous exploration of how the 2016 election made him enjoy politics more than he ever had before. When not being a reclusive writer, Kruiser has had the honor of entertaining U.S. troops all over the world. Follow on: GETTR, MeWe, Gab, Parler,
Read more by Stephen Kruiser
Tags: 2020 PRESIDENTIAL ELECTION DONALD TRUMP RNC