The Morning Briefing: DNC Night 3: Trump's Twitter Feed Was My Favorite Speech of the Night

Trump’s Trolling the Highlight of Kamala Night at the DNC

Night three of the DNC’s worst online hangout ever is in the books and the Republic has thankfully survived another speech by American Narcissus, Barack Obama. For that alone, we should all feel well and truly blessed.

From a conservative standpoint, Wednesday night’s DNC slog featured the worst of the worst. Not only did the Lightbringer regale us with his presence, but Granny Maojackets made a video cameo appearance to whine about the fact that she lost in 2016 because we elect presidents the way the United States Constitution tells us to and not by the popular vote.

Hillary Clinton may be a bitter, pathetic woman but none of us will ever truly understand the hell she went through to sober up long enough to record that video for the DNC. Our thoughts are with her and whichever members of her household staff she verbally abused while going through her DTs. I sincerely hope there were no puppies around to kick.

Last night was, of course, the big night for Sen. Kamala Harris at the DNC. The woman who hopes to become the first beneficiary of a 25th Amendment coup gave her acceptance speech to the void and — in the best American presidential politics tradition — got the amnesia required to forget her disagreements with her running mate.

Harris’s brief trip to the “top tier” of the Democratic primary polls was fueled by a debate confrontation with Biden where she attempted to portray him as an old-school racist.

I guess he’s been cured of that now.

Forget the DNC lineup though, the best video of the night was on President Trump’s Twitter feed:

Welcome, Barack and Crooked Hillary. See you on the field of battle! pic.twitter.com/ZrTKXcc6aU

It stuns me that there are still Republicans who complain about Trump’s Twitter habit. His master trolling of the Dems is always entertainment gold to me. He’s actually making plague year politics fun with stuff like this.

The president had a couple of critiques of the two biggest speeches of the night. One for Obama:

WHY DID HE REFUSE TO ENDORSE SLOW JOE UNTIL IT WAS ALL OVER, AND EVEN THEN WAS VERY LATE? WHY DID HE TRY TO GET HIM NOT TO RUN?

and one for Harris:

BUT DIDN’T SHE CALL HIM A RACIST??? DIDN’T SHE SAY HE WAS INCOMPETENT???

There is more life in these three tweets than there’s been in three nights of DNC “festivities.”

This most unusual DNC wraps up tonight with a huge roll of the dice. They’re risking letting Biden off-leash for an acceptance speech. Who knows, maybe they’ve been drilling him for months on this and he will actually pull it off. Or he’ll drop trou halfway through and yell, “I HAVE A PONY NAMED JEFF!”

My colleagues will be liveblogging (some drunkblogging) the DNC finale tonight. The link will again be at the top of the home page once it starts.

Here’s hoping the president gets his CAPS LOCK on again.

Governor Janet Mills (Maine) now decrees that staff in restaurants should wear face shields upside down so that they are attached at the collar instead of the forehead, so that their breath is directed up, not down. FACT!!! Seriously. Mental. pic.twitter.com/VMFOmd4DSJ 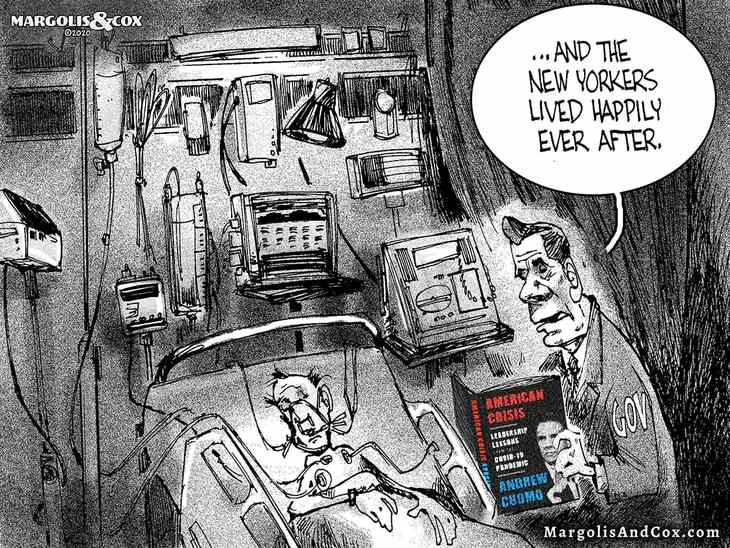 But “myth,” or something. Antifa Rioters ‘Embedded Themselves’ Among Peaceful Protesters to Wreak Havoc in Richmond

Despite a Massive Budget Crisis, de Blasio’s Wife Maintains a Staff That Comes With a Shocking Price Tag

And the MSM still won’t call him out. DISGUSTING: Andrew Cuomo Pens Book About How He ‘Took Charge’ During COVID-19 Pandemic

Postmaster General DeJoy Suspends Reforms Until After the Election

The rest of the party is OK with it.  Biden Condemns Appearance of Rabidly Anti-Semitic Linda Sarsour at His Own Convention

Progressive Pundit Torches Kasich: ‘We Don’t Want Him Either.’ Chris Christie Was Even More Blunt.

Shucks. Radicals Outraged That AOC Had Only Bit Part in Democratic Convention

Nightmare for Democrats: The Impact of a Wretched Law in California Could Send Voters Running

It’s Not Just Biden That Doesn’t Get Second Amendment

He wants everyone he didn’t kill in March and April to die now. Cuomo Says It’s Time To “Reimagine Policing” As Shootings Spike In NY’s Capital City

What a Baby: Hillary’s Reaction to James Comey’s Tweet Means She *Still* Has Not Moved on from 2016

Creepy. The First State Orders All Students to Receive Flu Vaccine by the End of the Year

Sure, let’s put them in charge. DNC Video: Democrat Asks “Why Can’t Folks Imagine A World Without The Cops?”

Girlfriend Describes Assault Of Adam Haner: ‘They Were Just Looking To Fight Somebody’

Pelosi Getting Ready To Cave On Smaller Relief Bill?

Barack Obama Remains the King of “I” in DNC Speech

Sorry, Hillary: Everyone was still talking about Billie Eilish while they played your video

Everything old is new again. In 14th-Century Florence, Some Residents Socially Distanced While Others Hit the Bars

Democratic Convention Viewer Wishing They Would Just Get To The Part About All The Free Stuff https://t.co/NwMuChfi4t

This is the funniest of the SNL “Celebrity Jeopardy!” skits I’ve seen.

PJ Media senior columnist and associate editor Stephen Kruiser is a professional stand-up comic, writer, and recovering political activist who edits and writes PJ's Morning Briefing, aka The Greatest Political Newsletter in America. His latest book, Straight Outta Feelings, is a humorous exploration of how the 2016 election made him enjoy politics more than he ever had before. When not being a reclusive writer, Kruiser has had the honor of entertaining U.S. troops all over the world. Follow on: GETTR, MeWe, Gab, Parler,
Read more by Stephen Kruiser
Tags: 2020 PRESIDENTIAL ELECTION DEMOCRATS DNC DONALD TRUMP JOE BIDEN KAMALA HARRIS