Welcome to Insanity Wrap, your daily dose of the best of the worst. Teaching hate — and even “revenge” — is today’s big crazy.

This is a physical side effect of watching a life destroying amount of @CNN. 😳pic.twitter.com/bSSUfIpIBu

For what it’s worth, anyone healthy enough to wear all that gear is probably at very little risk from the Wuhan Flu.

Teaching Hate: Another Damn Thing We Have to Be Concerned About

When it comes to her Critical Race Theory high school curriculum, this South Carolina educator plays by street rules.

Here’s a quick & dirty transcript of a virtual South Carolina high school classroom seen in the Twitter video above:

Because some of the topics we’re going to talk about, we are gonna be talking about inequalities, social inequalities and the one thing that you do need know is, it’s going to be tough.

I’m about to teach a unit on social justice… this is where we establish ground rules.

I don’t know how many of you know this book, Jason Reynolds, “Long Way Down.” Y’all know this one? All right. This is [a] phenomenal book. In it, he starts out the entire book by saying three rules, the three rules of the neighborhood.

You have three rules. One, no crying, no matter what. Two, no snitching. And three, revenge.

Allow Insanity Wrap a brief-but-fair summation: “We’re going to talk about tough issues, but you can’t complain, you can’t tell your parents, and it’s about revenge.”

A black teacher on the public payroll is teaching what amounts to prison yard rules to kids who might already be vulnerable.

Nature abhors a vacuum. The vacuum that nature abhors most is an empty brain. Having refused to teach little things like civics or math, progressives are filling those empty brains with nonsense and hate.

Previously On Insanity Wrap: Court Slaps Down Biden Tax Mandate and Other Items of Much-Needed Sanity

Jail. Jail for Avenatti. Long sentence, and the judge was savage. https://t.co/rDwtCM5lnH

Insanity Wrap is sure that one of our other fine PJ Media writers will have even more on this developing story, but we didn’t want to deny you this brief moment of schadenfreude.

Defund the Police, Demoralize the City

This is just sad.

Not just for Portland, but for Insanity Wrap as a dad. Son the Elder wants to train as a chef and sees himself someday running a small fleet of food trucks.

What are we supposed to tell him if this rot keeps spreading?

Fear not, comrades! For these are merely liberty-loving migrants expressing their enthusiasm for the American lifestyle. 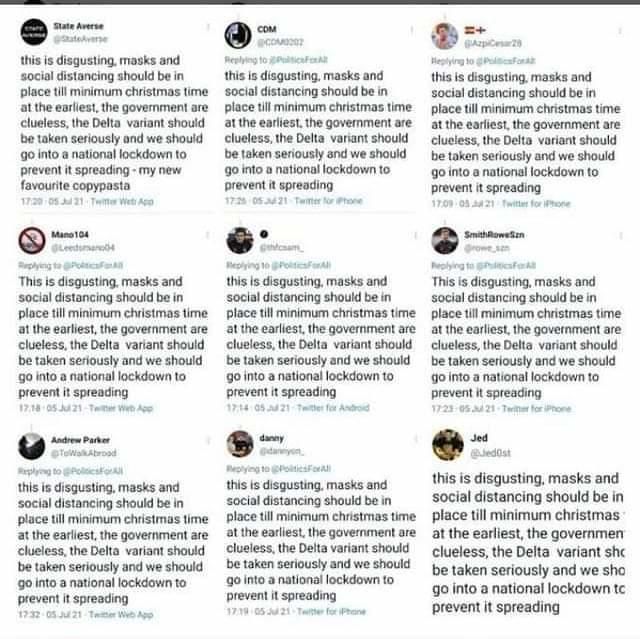 U.S. adult Twitter users are younger and more likely to be Democrats than the general public. Most users rarely tweet, but the most prolific 10% create 80% of tweets from adult U.S. users.

What percentage of that 80% comes from progressive bots endlessly repeating the same message?

.@latimes surprised by the annual phenomenon known as "summer."

"Excessive"? Forecast calls for temps about 2 degrees above normal for a few days, then below normal for several days. pic.twitter.com/CwJmGNun1q

It isn’t that the weather is variable — some days are a little hotter than average, some a little cooler.

The problem is that California no longer produces enough of its own electricity to deal with even mild fluctuations, while simultaneously denying state residents proper water infrastructure and refusing to properly manage its forests.

Not enough power, not enough water, too much kindling.

It’s a recipe for disaster. Or as Insanity Wrap has been saying for quite some time over at Instapundit, it’s a “crisis by design.”

Bravo, California: You’re getting exactly what you wanted.

Does anybody outside the panic pr0n industry or panic pr0n connoisseurs still pay any heed to anything celebrity medical spokesmodel Anthony “Doctor” Fauci has to say?

If so, that person is today’s craziest person in the world.

Steve launched VodkaPundit on a well-planned whim in 2002, and has been with PJ Media since its launch in 2005. He served as one of the hosts of PJTV, a pioneer in internet broadcasting. He also cohosts "Right Angle" with Bill Whittle and Scott Ott at BillWhittle.com. He lives with his wife and sons in the wooded hills of Monument, Colorado, where he enjoys the occasional adult beverage.
Read more by Stephen Green
Tags: CALIFORNIA WOKE INSANITY WRAP CRT