Who's Ready for Another Subprime Real Estate Crash? Joe Biden, That's Who

Welcome to Insanity Wrap, your daily dose of the best of the worst. Setting up another subprime real estate crash is today’s big crazy.

Was voted in her high school yearbook as “Most Likely to Have More Cats Than Friends.”

Remember the early part of the 21st century, when Washington “helped” poor people by encouraging reckless lending to buy houses?

And remember how the reckless loaning practices made their way up through the middle class?

Remember how we ended up with a massive bubble of bad loans and overpriced housing?

Then remember how millions of people ended up losing everything or at best having their finances ruined for years?

“Wasn’t that awesome?” said no one ever.

When the bubble popped — all bubbles pop — we ended up with the Great Recession and everyone with a lick of sense said, “Let’s never do that again!”

Democrats have not a lick of sense.

A long-awaited Supreme Court decision last month gave Biden the ability to remove the Trump-era leader of the Federal Housing Finance Agency, and he wasted no time. The president installed as interim director an agency veteran who says she’ll make affordable housing and combating discrimination a top priority

But even that’s not enough:

Top Democrats are calling on Biden to quickly name a permanent leader — a position that Senate Banking Chair Sherrod Brown’s spokesperson said is “vital to the administration’s goals of building an equitable economy and must be filled quickly.”

Even POLITICO feels it necessary to admit that “making mortgages cheaper and more accessible could also raise the risks of defaults and increase the odds that the companies would need another bailout in the future.”

Also, the housing prices are already artificially inflated by a combination of near-zero real interest rates and regulatory restrictions on increasing supply. Adding another go at massive subprime lending would make matters even worse — and riskier.

Insanity Wrap has no crystal ball. We couldn’t say for certain whether Democrats are hell-bent on another subprime real estate crash and Great Recession.

But if that were the goal, this is exactly how to go about achieving it.

Exit Question: Given how much money and power Washington got to commandeer during the last crisis, why wouldn’t they want to engineer a repeat?

Previously On Insanity Wrap: President Gaslight Assures You That Your Rising Food Prices Are Down

There Is No Leftwing Cause David French Will Not Embrace

Public schools are teaching kindergarteners that "whiteness" is the devil and lures children with the promise of "stolen land, stolen riches, [and] special favors."

David French believes that state legislation banning this abuse is "un-American" and a "threat" to democracy. pic.twitter.com/B17FZESVqC

The Bay Area’s freelance socialists have moved on from Walgreens to Neiman Marcus.

Quite the step up.

Don’t be fooled by the progressive narrative that these are hungry oppressed people doing what they must to get by. As PJ Media’s own Stacey Lennox reported on Friday:

According to the California Retailers Association (CRA), organized retail crime rings commit most thefts in San Franciso. These groups are recruiting juveniles and homeless individuals to steal items. The crews then resell stolen goods on the street, and the crime rings pocket the profit.

They can do this without fear of repercussion because San Francisco’s unlikely (and highly unpopular) district attorney has made it city policy not to prosecute so-called “lifestyle crimes.”

In other words, DA Chesa Boudin gave the green light to organized crime.

Peak Biden story: POTUS is now regaling the LA Dodgers at the White House with a story about him at the second Congressional baseball game when he says hit the ball 368 ft off the right-centerfield wall. "My kids remember that," he adds.

Presidentish Joe Biden just can’t help himself, can he? 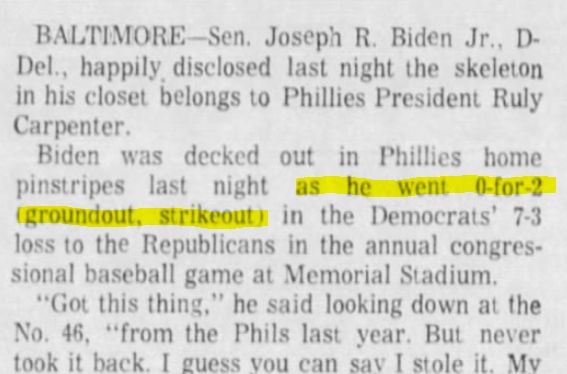 When CBS journolister Bo Erickson calls it “Peak Biden,” is that a tacit admission that Porchlight is just making …stuff… up again?

If so, you’d think a real journalist would call out the lie, rather than relying on Twitter users to do his job for him.

Today’s craziest person in the world is anyone who didn’t see this coming:

“Those running the prison system know how dangerous conditions have become for the women in California state custody. Many of the correctional officers have openly acknowledged that they expect the women will be raped and assaulted, there will likely be pregnancies, and, in general, the environment will be ripe for exploitation of the women and challenging to control.”

The post-sane Progressive Left respects any man who claims to be a woman, but actual women not so much.

Previously On Insanity Wrap: Court Slaps Down Biden Tax Mandate and Other Items of Much-Needed Sanity

NEW – 92 shot, 16 killed, 6 kids among the wounded in Democrat Mayor Lori Lightfoot's #Chicago. The most violent weekend of 2021 so far. pic.twitter.com/fR3ju3Pc9g

Weird. Insanity Wrap thought it was the gangbangers bringing violent crime up to levels not seen in a decade or more, while Lightfoot deflects the blame, that was the reason for criticism.

We regret the error and wish Lightfoot luck in her pursuit of the real killers.

But that’s what you come here for, correct?

We certainly hope so.

Steve launched VodkaPundit on a well-planned whim in 2002, and has been with PJ Media since its launch in 2005. He served as one of the hosts of PJTV, a pioneer in internet broadcasting. He also cohosts "Right Angle" with Bill Whittle and Scott Ott at BillWhittle.com. He lives with his wife and sons in the wooded hills of Monument, Colorado, where he enjoys the occasional adult beverage.
Read more by Stephen Green
Tags: INSANITY WRAP BIDEN ADMINISTRATION