Welcome to Insanity Wrap, your daily dose of the best of the worst. Biden border chaos is today’s big bad.

Climate specialist: Well b/c that's the number "we chose"#Science pic.twitter.com/k6ILumkfqI

So now you know.

Insanity Wrap would not normally inflict an MSNBC segment on you, gentle reader, but while searching YouTube for riot videos today, we noticed a new trend developing in the mainstream media.

Along with this MSNBC clip, we came across the following:

There were plenty more examples, but three is plenty to make the point.

There were two events on January 6. One was a large and peaceful protest outside the Capitol, and the other was a nasty (but much smaller) riot that broke inside the Capitol.

Neither was an insurrection, even though that’s the narrative set that very day by President Porchlight and his media enablers.

And it’s the narrative they’ve clung to — at least until now.

Insanity Wrap is forced to assume that the American public simply wasn’t buying the fake insurrection narrative, and “worse,” that continuing to push it was hurting their cause. 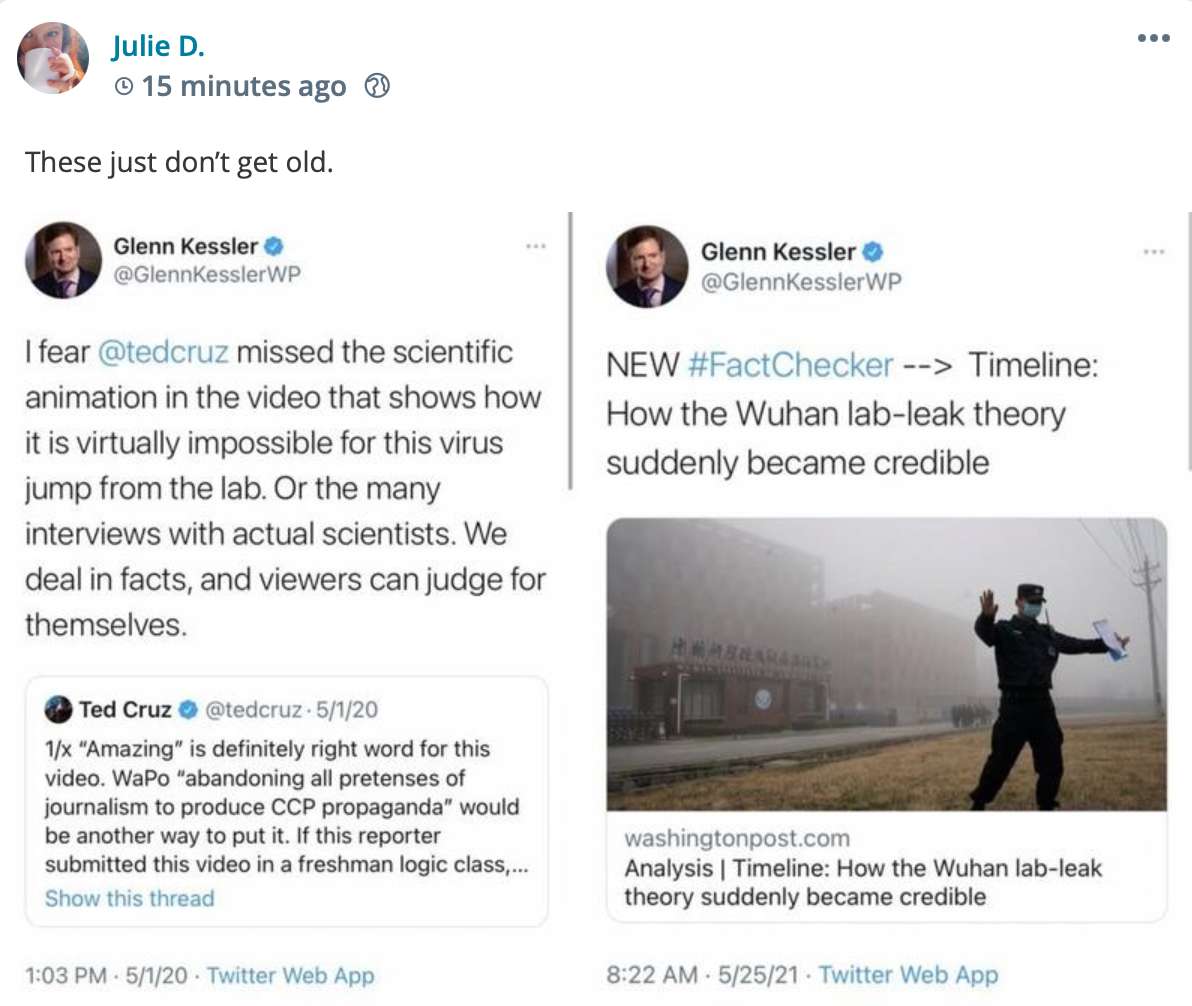 WaPo hack Glenn Kessler has got to be nuts if he thought no one would notice.

Insanity Wrap stumbled across it on Twitter and figured we’d share it for the sole purpose of this next little reminder.

The news media has known all along that BLM is a Marxist organization seeking to overthrow …everything, really… while pretending that they seek nothing more than racial equality.

What’s that tell you?

Nothing you didn’t already know, you say?

The pandemic is OFFICIALLY OVER. https://t.co/W5mathBjqE

Insanity Wrap just gave silent thanks, once again, for the Trump vaccine.

‘Overwhelming’ Number of People Moving to Florida Registering As Republican

Well, this is as delightful as it is unexpected:

Many people moving to Florida are registering as Republicans because lockdowns in blue states caused them to reevaluate being a Democrat, Gov. Ron DeSantis (R) said Wednesday.

“So it’s interesting with Florida, like, the media at the beginning of this said, ‘Florida is bad,’ and I think it’s because they wanted to damage Trump in Florida, wanted to damage me, so they just kept saying it was bad, even though the facts didn’t say it,” he said during a town hall event on Fox News Channel’s Hannity.

Insanity Wrap doesn’t watch Hannity — or anyone else, left, right or indifferent — but we would have liked to have seen DeSantis make this statement live.

New Yorkers have been fleeing to Florida for decades, but never in such numbers — and never changing party affiliation from D to R in such numbers that anyone made a fuss out of it.

Insanity Wrap likes to think of it as the one positive aspect of Bill de Blasio’s legacy.

8th grade Portland, OR teacher has a message for her fellow teachers:

Teachers that DO NOT teach anti-racism are abusing children. Either start teaching anti-racism or the district will fire you.

(Notice how many of the other teachers on the call are nodding in agreement) pic.twitter.com/xlUrkeMCu6

Mandatory CRT? Or you’re a pedophile?

Insanity Wrap has a couple of wee-tiny problems with this one.

The first is that teaching morals is the parents’ job, not the schools’.

The second is that CRT is not anti-racism. It’s a particularly nasty form of Marxist-tinted racism masquerading as anti-racism.

It isn’t, in other words, even morals. CRT is a political agenda.

Get it out of the schools, period.

Out of the country would be nice, too.

Biden Border Chaos: Another Damn Thing We Have to Be Concerned About

This is fine, we’re told. llegal immigration is just the penance America has to pay for… something.

The agency said that since Oct. 1, the beginning of Fiscal Year 2021, agents in the sector have arrested 95 convicted sex offenders — making a 3,166% increase over the same timeframe last fiscal year.

The staggering figure comes as agents picked up 10 convicted sex offenders in just a week. The arrests were made between May 17 and 24, with nationals from Honduras and Mexico among those arrested.

How many will face nothing more severe than catch-and-release? How many weren’t caught?

Insanity Wrap sometimes thinks about illegal immigrant crime (or is that a redundancy?) a bit like the way Dante thought about covering the convenience store in Clerks: “I’m not even supposed to be here today!”

Crime is a lousy part of the human condition, and difficult enough to deal with even when it’s committed only by citizens and legal residents.

But what do you tell the family of a girl raped (or raped and murdered) by someone who might have slipped through a border that was left purposely unwalled?

He wasn’t even supposed to be here today — or any day.

That’s the worst part of the tragedy, and it’s a tragedy being enlarged, by design, by Presidentish Joe Biden.

This one is far too good to check, so if you don’t mind, Insanity Wrap is going to pretend that it’s true.

Steve launched VodkaPundit on a well-planned whim in 2002, and has been with PJ Media since its launch in 2005. He served as one of the hosts of PJTV, a pioneer in internet broadcasting. He also cohosts "Right Angle" with Bill Whittle and Scott Ott at BillWhittle.com. He lives with his wife and sons in the wooded hills of Monument, Colorado, where he enjoys the occasional adult beverage.
Read more by Stephen Green
Tags: CONSERVATISM INSANITY WRAP