More: “Meet Jo. Jo is a 20-something MPH who works for the CDC. Jo’s model is being used to decide who gets vaccinated in the U.S. Jo is a proud American who lives on ‘occupied Mvskoke land’.”

The country is in the very best of gender nonbinary, hyperpartisan, normal-human hating hands.

Dear Santa: Please Give Cuomo Nothing But Coal

If Insanity Wrap were a New Yorker, we’d say, “Can you believe the nerve of this f_king guy?”

Instead, we’ll just watch with a mix of amusement and contempt as New Yorkers flee in ever-greater numbers from exactly what they voted for.

Santa Claus will be coming to town this year, Dr. Anthony Fauci says.

“I took care of that for you,” he says. “…I took a trip up there to the North Pole; I went there and I vaccinated Santa Claus myself. I measured his level of immunity, and he is good to go.” #CNNSesameStreet pic.twitter.com/CNJ520XTew

Love In the Time of Coronavirus

The Wellness Center at St. Olaf College in Minnesota has warned against kissing during — and Insanity Wrap swears we aren’t making this up — “partnered sex.”

If you can manage kissing during unpartnered sex, count Insanity Wrap as officially impressed.

It Is Unwise to Ask Difficult Questions, Comrade

Is this the same doofus who was boasting about overseeing the most secure election in US history? https://t.co/OBuAIemOZW

Difficult or not, the answer is: “Why, yes — yes it is the same person who boasted about overseeing the most secure election in U.S. history.”

Previously On Insanity Wrap: Go to the Back of the Vaccine Bus, Whitey

Thank You, Sir, May I Have Another?

Protester who offered cops coffee CHARGED for not social distancing

From our friends up north:

Today, I’m bringing you another story from Hamilton, Ontario where a protester named Fraser McBurney was charged for his involvement in a recent demonstration downtown. Fraser’s terrible actions on that day seem to be offering protesters — and the officers watching the event — coffee and snacks while not remaining six feet apart. Now, police have handed him a $750 ticket under the Reopening Ontario Act.

And Now, Some Actual Unity

Ok, so this is interesting – connecting with people I typically disagree with because we all think this stimulus bill is a crock of shit.

We can all agree the government is NOT helping … love it.

It’s official! Everybody who isn’t a part of Washington hates Washington.

So we’ve got the unity, but Insanity Wrap is pretty sure the healing is still a long way away, as you’ll see in this next item.

The COVID relief package is certainly a relief for Congresscritters who might have previously felt their spending had been constrained by some small sense of morality.

PJ Media’s own Victoria Taft and Bryan Preston have already done the admirable — if unpleasant — work of detailing just how much pork is stuffed into the COVID relief bill.

Bryan says the bill is proof that Washington is broken, and normally Insanity Wrap would agree with that assessment without a second thought.

But then we had a first thought: What if Washington is working exactly as designed?

Maybe not as originally conceived and detailed in the Constitution, but that was a long time ago. Sadly, Progressives of the Left and Right have made some fundamental changes since then.

That’s why Insanity Wrap now believes that as awful and irresponsible as it is, our federal government is functioning perfectly — but also as restructured by the 16th Amendment (establishing the income tax in 1913) and the 17th Amendment (providing for the popular election of senators also in 1913).

Insanity Wrap nearly forgot the third element: The establishment of the Federal Reserve, also in 1913. The Fed’s job — since we went off the gold standard — is to print up as many dollar bills as might be needed to paper over Washington’s sins, errors, and childish ways.

This COVID relief package then is evidence that Washington is functioning — at long last — exactly as was envisioned by the early 20th Century Progressives who gave us the Fed and the 16th and 17th Amendments.

So when you see your very own congresscritter lining up at the federal trough to spend money we don’t have on things you’d never approve of yourself, that’s nothing but top-down, irresponsible, divorced-from-reality, Progressive government working the way it was intended: A Rube Goldberg money-printing machine, well-oiled with pork grease. 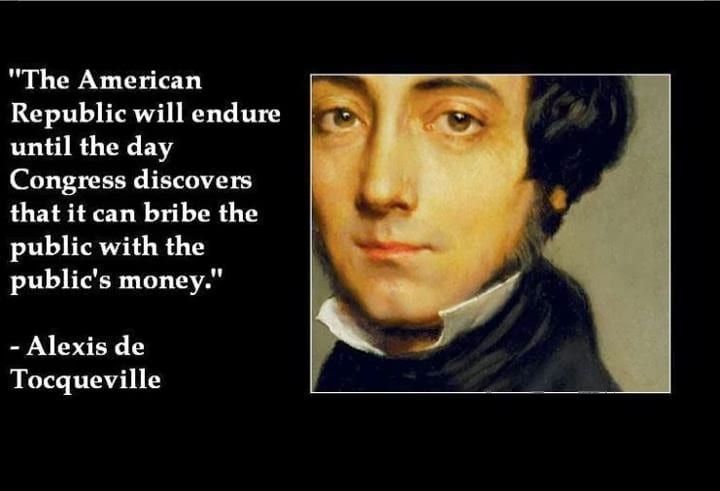 As it turns out, Alexis de Tocqueville was far too pessimistic — in the worst possible way.

The Republic survived Congress discovering that it can bribe us with our own money. What the Republic might not survive is Congress realizing that it can spend without worrying itself over any of that “consent of the governed” nonsense.

Things will have to get worse before they get better — if that.

Go Full ‘Network’ on These Thieves

Insanity Wrap is suddenly too cranky to enjoy a Bloody Mary with our breakfast.

Does anyone know where we could get some heroin?