(But I repeat myself.)

It’s always nice when someone endorses you.

Except when it isn’t.

…well, let’s just say Kamala Harris would certainly enjoy getting Biden-Harris marked on certain people’s secret ballots, but maybe the public love is a little too much.

Here are ten examples of just that.

All in the Imaginary Family

My poodle and I are going to bed happy knowing that when Uncle Joe becomes President, Auntie Kamala will be there in case bad crap happens. pic.twitter.com/mlWSCNvfCi

Let’s stipulate for the moment that some Republicans and conservatives distrust Donald Trump so much that even now they’re unwilling to vote for him for president.

It’s a big country with plenty of room for reasonable disagreements. So having stipulated the premise, let’s also concede that an actual Republican or actual conservative could reasonably and honestly find it impossible to support Trump with their vote.

There was no way I could vote for George Bush in 1992 after his 180 on taxes, something we all know was true of many Republicans.

However, it’s one thing to refuse to support a member of your party whom you feel has let you down, and quite another to sappily endorse the opposition, referring to them as “Uncle Joe” and “Auntie Kamala.”

Ann Navarro has no credibility as a Republican or a conservative, something on which even Kamala Harris and I might agree.

Worse, after that endorsement, she has no credibility as a serious analyst.

If I were Kamala Harris — God forbid — I would blush at the thought of that tweet.

“I don’t care what the newspapers say about me as long as they spell my name right.”

The worst part? Krugman couldn’t quite bring himself to endorse Harris, but he did piggyback onto her veep announcement publicity to sell his own COVID-19 analysis — spelling her name wrong in the self-promotional process.

Thank You for Bringing Up… Saddam Hussein?

If anything is going to motivate the GOP base more than it already is, threatening to treat Republicans like members of the Ba’ath Party would probably do it.

With that, Jason Johnson just earned the coveted Ralph Wiggum Award for Helping. 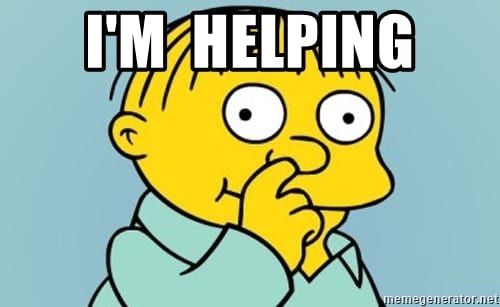 Previously, Eric Swalwell had endorsed using nuclear weapons on American gun owners, if you’re wondering how much his endorsement is worth.

Kamala Harris doesn’t strike me as a very nice person, or trustworthy, or as being respectful of the rights of her fellow Americans.

But she also never threatened me with nukes, so I have that going for me.

And it would be a short war my friend. The government has nukes. Too many of them. But they’re legit. I’m sure if we talked we could find common ground to protect our families and communities.

With a Little More Heat This Endorsement Might Rise to Lukewarm

Thank god it's Kamala! I was worried Biden was going to pick someone else who would have made me absolutely still vote for him no matter what.

(Asking for a friend.)

Another Closet Collectivist Comes Out

David Mastio still bills himself as a libertarian conservative, so you might be wondering which part of the Green Nude Eel or going back to kowtowing to Beijing he finds the most libertarian or conservative.

Harris must be wondering, “Who?”

Actually, This One Isn’t That Bad

Bill Kristol actually provided a nice (if underhanded) endorsement of Kamala Harris by strongly hinting she should be at the top of the ticket.

Still, this one counts as cringeworthy because Bill Kristol.

@KamalaHarris You like cats, right? And you agree #calicocats are the most beautiful of creatures?#CatsForKamala pic.twitter.com/xekibjEA1f

If we give the vote to cats whose owners call them “fur babies,” we’ll never elect another Republican to office again.

That’s Not a Superhero

Queen Veep <3 @JoeBiden choose @KamalaHarris as his running mate and me & my kid are HERE FOR IT pic.twitter.com/FTTISnafiw

Now you have to watch it, too. 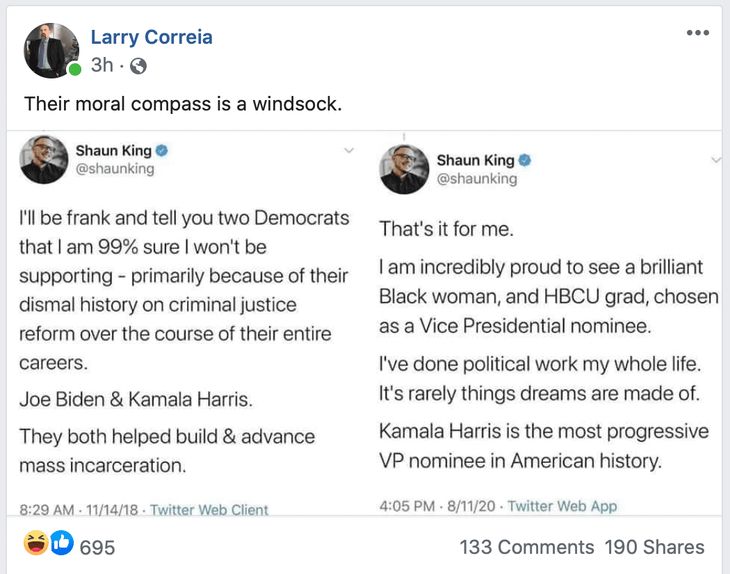 I can only speak for myself, but when I harshly critique leaders, it’s with the hope that they will grow and evolve.

Kamala has done so, in very specific ways, on issues of justice.

I’ll remain a critic. But I’m nothing but glad to see the growth. Is what it is. https://t.co/vS57O9jgeO

It’s a safe bet Shaun King will push this odd ticket even harder than he pushed the odd notion that he’s a black man.

If I missed any good ones, please share them in the comments — we could all use a good cringe today.