Insanity Wrap #26: Kamala Harris Got the Nod, Biden to Get the Knife?

Insanity Wrap needs to know: Could Biden have made a worse veep selection?

Answer: Only in theory, since neither Zombie Stalin nor Vampire Hitler fulfill certain constitutional requirements.

• The gaslights are turned up to 11

• Those who don’t learn range safety are doomed to… well, you’ll see

Not the first time we’ve seen this guy show up on Andy Ngo’s Portland Violence feed.

And, yes, Insanity Wrap did say “guy” and we will continue to do so.

Poor Joe Biden. Such an important decision, so few choices — by his own making.

Biden backed himself into a corner, pre-announcing he’d pick a woman and then letting himself get co-opted by BLM. It was Harris or Rice at that point, which is pretty much a choice between a smaller dose of arsenic or a heavier dose of strychnine.

We hesitate to ask you imagining a president so short-sighted negotiating with the Chinese.

About the announcement itself…

Joe Biden has always been a liar of zero hesitation, although Insanity Wrap is willing to concede that this particular skill might have become less impressive in recent months as it’s become more likely that Biden has little idea of what he’s saying.

I have the great honor to announce that I’ve picked @KamalaHarris — a fearless fighter for the little guy, and one of the country’s finest public servants — as my running mate.

Harris made her name clawing her way up the backs of little people (among other, just-as-sordid-but-less-political activities about which Insanity Wrap won’t bore you, gentle reader).

Harris was responsible for putting “over 1,500 people in jail for marijuana violations and then laughed about it when she was asked if she ever smoked marijuana.”

Harris’ office also blocked DNA evidence that could have freed a man who may be innocent. And what’s more, as Gabbard said, “She kept people in prison beyond their sentences to use them as cheap labor for the state of California. And she fought to keep (the) cash bail system in place that impacts poor people in the worst kind of way.”

Lots of people are asking me what I think of the news tonight—@KamalaHarris is the greatest threat to First Amendment civil rights our country has ever seen. I know because she had my home raided for speaking the truth about her political patrons at Planned Parenthood. 🇺🇸

To be fair, Harris is an equal-opportunity violator of due process, civil rights, and basic decency. She’s also happy to apply her vicious skills to shaking down the big guys and using her office to stifle dissent:

Harris was a leader in the junta of Democratic state attorneys general that attempted to criminalize dissent in the matter of global warming, using her office’s investigatory powers to target and harass non-profit policy groups while she and her counterpart in New York attempted to shake down Exxon on phony fraud cases.

Until she was stopped by a federal court, Harris was laying subpoenas on organizations such as the Americans for Prosperity Foundation, a conservative-leaning group that is critical of Democratic global-warming proposals. She demanded private information that the organizations were not legally obliged to disclose, including financial information and donor lists, in order to be able to subject the supporters of right-leaning groups to legal and financial harassment. This was, as a federal judge confirmed, an obvious and unquestionable violation of the First Amendment.

Much more at both links, which we highly recommend visiting.

Perhaps the best we could say about Harris is that she’s struck a perfect balance between authoritarianism and corruption.

Seriously, we’d find less to criticize if Biden had gone with Zombie Stalin.

I should probably throw a warning up on this, but if you couldn't see what they were holding… here it is. Demetria Hester telling troopers that their wives are cheating on them "with something of that size." Now she's back to telling them that their moms/families/kids hate them pic.twitter.com/etngjhhT1H

Mildly not safe for work, we suppose.

Insanity Wrap would add that when you find yourself waving a sex toy at police officers in the middle of the night while indulging in middle-school playground taunts, you might want to reexamine some of your life choices.

Previously On Insanity Wrap: Antifa Gives in to the Dark Side

Insanity Wrap is pretty much done with these stories and so we promise this will be the last one for a while.

North Central College professor Adam Kotsko, who teaches the history of philosophy and religion, tweeted August 3 that “the Constitution is racist,” going on to qualify the statement by saying it could “operate in non-racist ways” but also claiming that “the design and effect of the constitution, in all its iterations, has been racist.”

Just to be clear, in the next tweet Kotsko said, “Same for capitalism, by the way!”

The Consitution was written by the Founders to secure the blessings of liberty to them and their posterity — belatedly as it did, finally, come to blacks and women.

But we did, finally, make good on that check Dr. King reminded us about with such authority.

Or we could go along with the Kotsko fellow and declare that liberty is racist and therefore must be eliminated.

We loved this next bit:

When asked if Amendments 13, 14, and 15 to the Constitution (the amendments that abolished slavery, afforded equal protection under the law and made it illegal to abridge rights on the basis of race, respectively) were racist in design and effect, Kotsko refused a request for comment. He also refused to comment when asked on what evidence he based his assertions about White culture.

Moderate Joe Wants to Socialize All the Things

Joe Biden surrendered to the socialists.

"We were able to significantly push Joe Biden to do things that he hadn't signed on to before. He is movable." pic.twitter.com/oDzxaWXjxX

“He is movable” might be the quote of the year about Punxsutawney Joe, who went from being the Democrats’ “safe” and “moderate” fallback choice to “Bernie Sanders’ sockpuppet” so quickly, it addled what was left of his brain.

Insanity Wrap has on one or two occasions posted videos of rioters using green lasers to try and blind police and federal officers. Reports of this particular form of violence — including videos — are widespread enough that the existence of these attacks—who the perpetrators are, and who the victims are—aren’t subject to debate.

And while Insanity Wrap wouldn’t normally single out a commenter for ridicule, certain attempts at gaslighting our readers have been so egregious (yet comical) that we felt we owed it to you to post at least one example.

Rioters with “press” painted on their homemade riot helmets (and bereft of notepads, tape recorders, etc) are not reporters, any more than Insanity Wrap turns into the Queen of Sheeba by putting on a tiara.

The gaslighting going on makes us think Brandolini’s Law is off by at least one additional order of magnitude.

Insanity Wrap is having trouble discerning the difference between freelance reparations and criminal burglary, but we’re certain that enough time spent in reeducation camp would benefit us greatly. 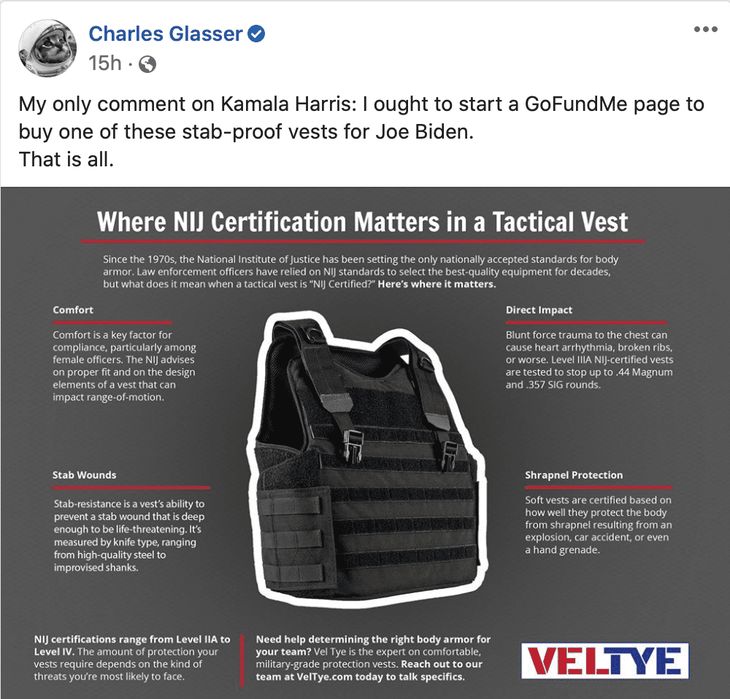 Insanity Wrap earnestly hopes Biden bought one of these long in advance of announcing Harris as his running mate, and also that he sprang for the heavily reinforced model — reinforced in the back.