• Barack Obama takes another publisher to the cleaners

• Is karma coming for killer Cuomo?

• Rob Reiner is a monument to white stupidity

Insanity Wrap can’t help but notice how many political grievances are really just about taking other people’s stuff.

Some do it at the ballot box, others use more direct methods. 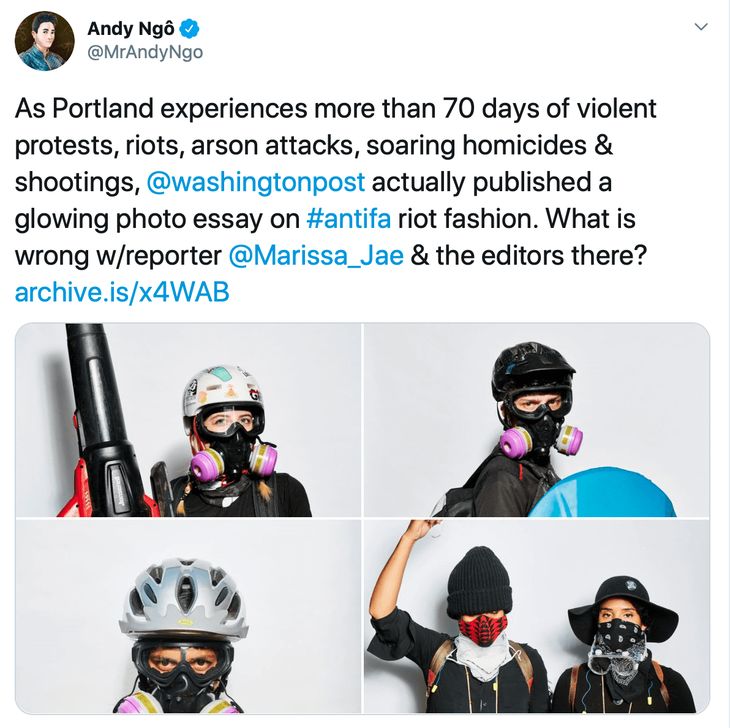 If you can stomach looking at it, here’s an archived version — i.e., a non-Washington Post link — of the photo essay.

Antifa here is shown to be what the modern version always was: LARPers with a violent streak in support of a nasty political agenda.

If you want to know why most of your friends, neighbors, and coworkers are unaware of antifa’s true nature, it’s because the media largely ignores the ongoing violence in Portland and elsewhere, while publishing puff pieces like WaPo’s nauseating photo essay.

And so it goes.

The Democrat-Media Complex would have you believe that antifa and the Marxist-run Black Lives Matter organization are nothing more threatening than reform movements with legitimate grievances.

In Portland, however, they’re testing the limits of how much violence they can get away with and finding that the ceiling keeps going up.

There’s a reason for that: they’re well-funded.

Andy Ngo, editor-at-large at The Post Millennial, noted that “Antifa rioters in north Portland have access to more than $1.3m in bail money, as well as pro bono lawyers. This is one reason even the extremely violent suspects get released so quickly to riot again.”

What you’ve been witness to for the last two months are not organic protests. They are the paid work of violent play-actors, peddling a false narrative about this country, the American people, and our institutions.

Insanity Wrap doesn’t buy a word of it, and neither should you.

This is a seal with an eel stuck up its nose https://t.co/KF20juOdSs pic.twitter.com/q95kdfnfVz

Whether you feel more sorry for the seal or the eel probably reveals something about your personality, which is why Insanity Wrap humbly suggests we all keep that information to ourselves. 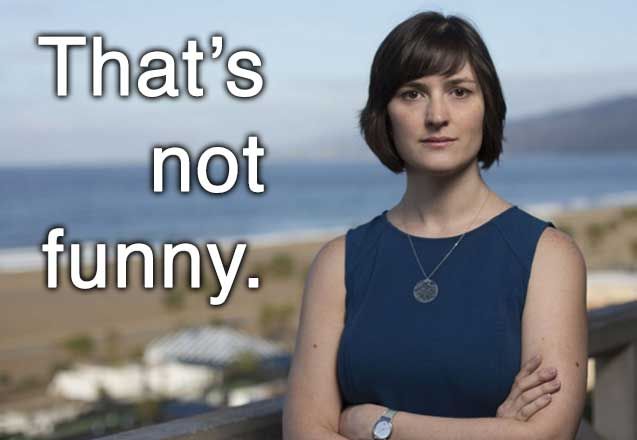 Instead Of Saying ‘Hey, Guys!’ At Work, Try These Gender-Neutral Alternatives.

We’ve Heard This Happens to Lots of Guys

It looks more and more like Barack Obama has made chumps out of yet another publisher:

Book contracts routinely include a “failure to perform” clause. Contracts that come with a reported $65 million advance, such as the one signed by Barack and Michelle Obama in February 2017 with Penguin Random House (PRH), will inevitably include such a clause.

Among the most common of such failures is the failure to complete a contracted work by an agreed-upon deadline. PRH is staring down one such failure right now. At the time the Obama deal was made in early 2017, insiders were telling Publishers Weekly that books by both Michelle and Barack would be released in fall 2018.

Michelle’s book did great, although Insanity Wrap believes there might have been some sales shenanigans as is sometimes the case with Democrat-penned political biographies.

That aside, here we are nearly two years after Barack’s deadline, and the publisher still has nothing to publish:

“The delay is wreaking havoc with print scheduling and of course budget planning,” one publishing insider told me. “The enormous advance is starting to ‘raise’ concerns within the publisher. While Michelle’s book performed well, Obama needs to deliver the book and sales to make the overall deal worthwhile.”

Back in the early ’90s, Obama took a $125,000 advance for a book on race and voting rights he never finished, although he did manage to hand in “bloated, yet incomplete drafts.” He also never repaid the advance, claiming he had too much student debt.

Some of the pages Obama did turn in, he wrote on a third-party’s dime:

He also did some writing at the offices of his new employer, Davis, Miner, Barnhill & Galland, the town’s leading civil rights firm. Some of his new colleagues were reportedly less than thrilled to see their young associate, feet up on his desk, doodling on his book on company time. The named partners, however, indulged him.

Insanity Wrap is impressed: Obama managed to get two organizations to pay him for a book he never wrote.

Nice work if you can shirk it.

It’s time to hold Andrew Cuomo accountable for so many reasons. The disastrous condition of the state's finances, the failure to implement the state's 2015 Pandemic Plan, the willful violation of every infectious disease protocol by forcing nursing homes to admit Covid-19… pic.twitter.com/8bcWZcxXhB

Unlike every other state with major outbreaks, New York only counts residents who died on nursing home property and not those who were transported to hospitals and died there.

That statistic that could add thousands to the state’s official care home death toll of just over 6,600. But so far the administration of Democratic Gov. Andrew Cuomo has refused to divulge the number, leading to speculation the state is manipulating the figures to make it appear it is doing a better than other states and to make a tragic situation less dire.

Insanity Wrap believes Cuomo is a liar and a killer who deserves nothing less than to be impeached and then brought up on charges of gross negligence (at the very least) or manslaughter (better).

The ball is in your court, New Yorkers — are you going to defend your people or the Cuomo name?

Sarah Iannarone is known as “the Antifa mayor.”

Ted Wheeler at long last came around just last week to the fact that violent rioters were, in fact, violent. Iannarone, if elected, would likely not even do that much.

Insanity Wrap misses the weird-but-livable Portland, and we wager it won’t be long before the vast majority of Portlanders do, too.

(Hat tip to Allahpundit at our sister site, Hot Air.) 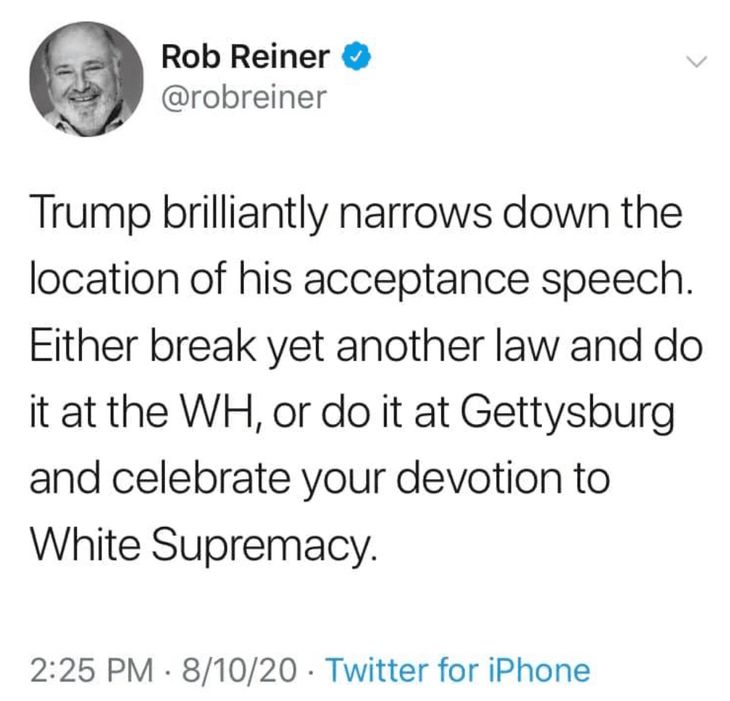 Insanity Wrap can’t improve on what Daily Caller’s Virginia Kruta had to say, so we’ll leave it at that.

The Union won at Gettysburg. The end of the Confederacy was written there in blood.

Thank you for coming to my Ted Talk.

Reiner seems to have deleted the tweet, but screencaps are forever, Meathead.

Previously On Insanity Wrap: Antifa Gives in to the Dark Side

Steve launched VodkaPundit on a well-planned whim in 2002, and has been with PJ Media since its launch in 2005. He served as one of the hosts of PJTV, a pioneer in internet broadcasting. He also cohosts "Right Angle" with Bill Whittle and Scott Ott at BillWhittle.com. He lives with his wife and sons in the wooded hills of Monument, Colorado, where he enjoys the occasional adult beverage.
Read more by Stephen Green
Tags: BARACK OBAMA ANDREW CUOMO INSANITY WRAP