Insanity Wrap needs to know: Who will the Lincoln Project endorse next in their anti-Trump delirium?

Antifa splashed paint at an elderly Portland woman and verbally abused her. “This isn’t your world anymore.” pic.twitter.com/lmkbR1fewb

Now that the feds are out, “Portland Mayor Finally Admits Violent Riots Aren’t the Same as ‘Peaceful Protests,’ After 68 Nights.”

Also: At least 140 DHS and federal police deployed to Portland have been injured since May.

Federal agents (largely DHS) have been disengaging from the Portland protests under a deal reached last week between DHS and Oregon Governor Kate Brown.

Did the Trump administration make a mistake, disengaging before the violence ended? Or did they force Portland Mayor Ted Wheeler to admit the obvious?

YOU make the call!

When Literally Everything Is Problematical

One of the great things about English is how adaptable it is, how many dialects spring up — almost endless combinations and recombinations taking in history, region, race, class, and elements of whatever other languages happen to be around.

But apparently we can’t revel in the diversity anymore because it’s racist or something.

English might not be the prettiest language, but it’s the most adaptable and, for our money, certainly the most fun.

But wokescolds gotta suck the fun out of everything.

In Which ‘The Lincoln Project’ Retroactively Endorses Obama

Obama built it. Trump broke it. Biden will fix it. pic.twitter.com/UTlbskYy09

They’re more conservative than you are because they back all the most popular Democrats.

We get it: Rick Wilson and the rest of the True Conservatives™ hate Trump because he’s not a real conservative like all of them are, so much so that they have no choice but to support Democrat Joe Biden this fall. Biden couldn’t do too much damage as president, hobbled by the GOP Senate, and of course the True Conservatives™ would fight to keep the Senate and even work to win back the House.

And then True Conservatism™ could be saved and its honor restored in time for 2024.

If that’s all it was, it would make sense, sort of, Insanity Wrap will grudgingly concede.

Except that the Lincoln Project isn’t reluctantly supporting a particular Democrat against a particular Republican. They’re also trying to turn control of the Senate to the Democrats. And now — because they’re so very deeply conservative — the Lincoln Project just retroactively endorsed Barack Obama, perhaps the worst statist to occupy the White House since Woodrow Wilson, and whose unofficial policy of drumming up racial animosities whenever possible helped to create our current Summer of Discontent.

Insanity Wrap would remind you that the so-called Lincoln Project is run by the same kinds of “conservatives” who helped run the Tea Party into the ground in order to save the GOP from those crazy people who attended the quiet rallies where they picked up after themselves and others.

The fauxservatives won the battle but lost the war.

The Tea Party people, having been completely frustrated in their effort to make the GOP act like conservatives for a change, took a chance on Donald Trump.

Trump turned out to be the only person crazy enough to take on Hillary Clinton in deep blue Rust Belt states — and win.

So the Lincoln Poseurs have taken their ball and run home to the Dems.

Insanity Wrap is no longer surprised or even annoyed by whatever stunts they pull.

Instead, we have reached a level of acceptance that the Lincoln Project people will never enjoy.

And it isn’t just the cocktails, we swear.

And Now, Some Good News 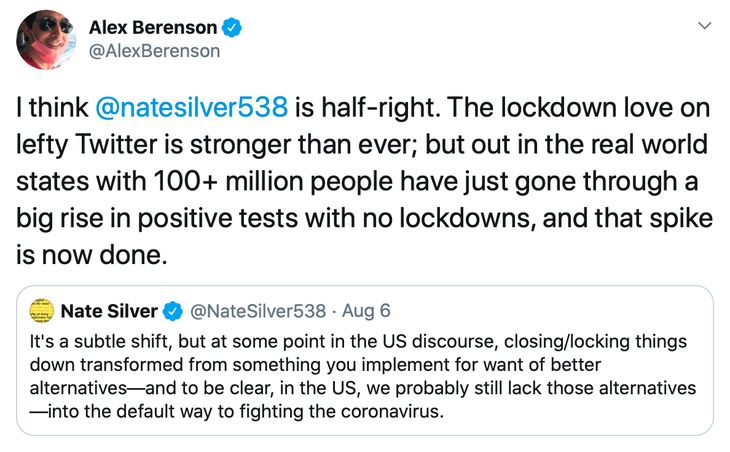 Alex adds, “One reason the lockdown lobby is so desperate to get them going again is that as the Sunbelt comes out of this mini-spike without lockdowns and WITH far fewer deaths and economic dislocation than NY, the cost will be impossible to hide.”

At that point, frustration turns to anger — and nobody knows what might happen then.

So let’s take advantage of this beautiful summer Friday and look at the bright side.

While positive cases have trended back up with the current spike in COVID-19 infections, the death rate continues to plummet.

At some point, we’re going to achieve herd immunity and details like this have Insanity Wrap convinced it’ll be sooner rather than later.

What will you do first when this thing finally ends?

We’re not going to argue with that.