Insanity Wrap needs to know: Exactly when did planet Earth slip from a sane timeline into the most insane of possible timelines — and how?

We’ll have the answer for you below.

But first, a quick preview of today’s Wrap.

First, the explosion when mostly peaceful rioters attempted to blow up a Portland police station.

Here’s that explosion I was talking about earlier at the courthouse:pic.twitter.com/kEKJYkmE0m

Then, locals reacting in horror to what just happened.

I asked these guys what they thought about the large explosion outside the doors to of the federal courthouse last night:

“What would you think if one of those cops died?”

“Fuck it. If one of them cops got killed, good.” pic.twitter.com/vzJ6jJyZmY

If by “horror” we mean “cold-blooded approval.”

This one comes to us from Louisville, Kentucky.

Businesses and non-profits in the East Market District of downtown Louisville, also referred to as NuLu (New Louisville), have received letters from left-wing activists demanding that they give in to a list of racial reparations or face having their businesses get negative reviews online.

• A 23% hiring quota for blacks in all positions

• Retailers must “include a minimum of 23% inventory of black retailers OR make a recurring monthly donation of 1.5% of net sales to black local organizations”

• Businesses will hire from a pre-approved list of black women to perform “diversity, equity, & inclusion training” for the employees

• Nonprofits will be subject to outside audits and take “necessary steps” to getting 23% black representation on their boards (that one’s gonna be tough for Jewish organizations, we’re just sayin’)

And so on. You’ll find the complete list at the link.

Local residents that reached out to The Daily Wire were stunned that the story was not receiving more attention in the local media and did not want to be identified because they feared “mob retaliation.” One person said that they felt that this was “criminal extortion.”

Except if you’re Dutch, then nobody’s mask does anything. Because the Dutch are such rabid conservatives. Science! pic.twitter.com/Kt2PL6Ta4W

Is it wrong that we spend so much time reading social media items about COVID that this kind of makes sense to us? 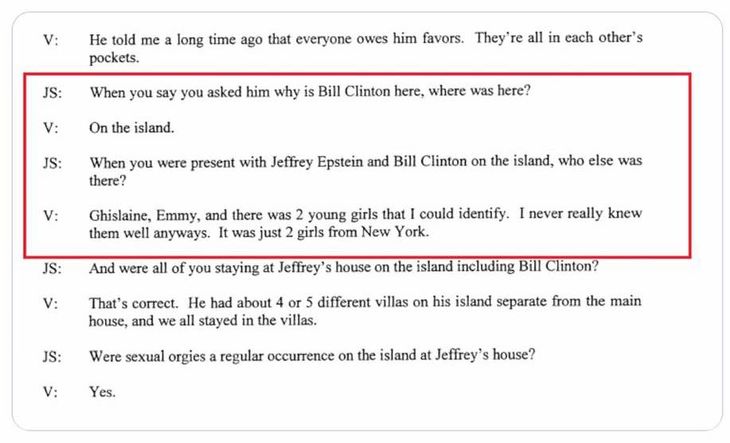 This — and much more — comes from a lawyer with the Twitter handle Techno_Fog.

Insanity Wrap supposes it might not be a huge leap for Bill Clinton to have gone from a 22-year-old intern less than half his age to a 14-year-old sex slave not even a third his age.

Rather than walk you through more of this muck, Insanity Wrap is going to leave it at just this one item for today while we go make ourselves the first Bloody Mary of what might be several.

In case you need one, too:

• 1/2 ounce each lemon and lime juices

• 4 dashes each of Worcestershire and Tabasco

• If you have fresh grated horseradish, consider adding a teaspoon

• Stir, pour over ice and garnish to taste

The Left Used to Say the Same Thing About the USSR

The left: Conservatives are evil, immoral, and depraved human beings who lack compassion

Also the left: “China is growing into a respectable nation”pic.twitter.com/RQhocJrMqO

Why can’t they recognize an evil empire when they see one?

Because they all picture themselves as potential evil emperors, that’s why.

Going a bit further down to socialism’s broader appeal, everybody sees themselves as the party cadre leader with the nice dacha outside of town, but nobody pictures themselves as just one of a hundred bodies in another mass grave.

But just going by the numbers, there are a lot more dead bodies in mass graves than there are warm bodies in dachas.

The Left Eats Its Own, Always

PJ Media’s own Jeff Reynolds has much more, so do please click on the headline.

We would just add two things.

First, a reminder that Insanity Wrap readers learned earlier this week, the so-called “Wall of Moms” was really just an antifa propaganda effort consisting of a “network of womxn and non-binary mother-identifying folx” by their own admission. Nary a mom among them, it seems.

Second, we still find nothing hotter than a little blue-on-blue action.

Antifa protesters dumped a bloody severed pig's head on an American flag outside the Justice Center in downtown Portland. They put a cop's hat on it and set all of it on fire. #PortlandRiots #antifa pic.twitter.com/qfAOT4ItxP

On the plus side, they don’t seem to have blown anyone up.

Insanity Wrap came of age at a time when the world was growing sane.

Born in 1969, we’re just old enough to remember how ugly and awful the 1970s were. Bad clothes, bad hair, bad economics, bad politics, and a growing sense of unease that the bad USSR was going to end up eating our lunch.

The music, however, was kickass enough to pull us through.

People — not just the American people, but people most everywhere — seemed to have learned a few vital lessons from the excesses of the 1960s, and the follow-on hangover decade when Insanity Wrap was growing from a toddler to a tween.

We did a 180-degree turn from Jimmy Carter to Ronald Reagan, malaise was replaced with optimism, stagflation and the misery index gave way to a sustained economic boom, deregulation and tax cuts were in vogue (no coincidence), and soon the USSR was left on the ash heap of history.

The turnaround was so complete that by the time Bill Clinton was elected president, policy-wise he might oftentimes be mistaken for a pre-Reagan Republican.

While Insanity Wrap never bought into any of that “end of history” stuff, we were delighted to be living in what looked like the sanest of all possible timelines.

This leaves us with the question: WTF happened?

We had so much, had learned so much, and then we threw it all away.

We enriched a new evil empire at the cost of our own manufacturing base to the detriment of our working- and middle-class. The GOP in its moment of Reaganesque triumph turned Dem Lite, while the Dems went Full Commie, and culturally right now the country has gone so crazy that 2020 makes 1968 look like 1928.

On top of it all, perhaps the only thing standing between us and total destruction is an oddly-hued former reality-show host who somehow — thank goodness! — managed to tweet himself into the Oval Office.

Clearly, we live now in the craziest of all possible timelines.

Insanity Wrap has a theory as to what happened, and when.

Everything seems to have started going wrong very near the turn of the century.

We posit that there exists a flaw in the very structure of reality itself.

That flaw, that tiny crack in the universe, can be opened wide by a secret code phrase. Once opened, that crack creates a wormhole big enough to suck in an entire planet, and squirt it directly and immediately from one timeline to another.

Do you know what that code phrase is?

The code phrase is “hanging chad.”

Prove us wrong. We dare you.

Previously On Insanity Wrap: Biden Gets Lost in a Gym, Plus Murder Hornets Mystery Solved