Insanity Wrap needs to know: Who is the First Amendment for?

Before we get to that, today’s Wrap also includes:

Violence breaks out at BLM street protest in Springfield, Ore. Two people resisting arrest are dragged from the mob. Portland-inspired protests and riots have spread to small cities in the state. pic.twitter.com/j49zqq6w05

Once again, we would like to take a moment to salute Andy Ngo for the brave work he’s doing.

In another one of his videos from last night, a protestor can be seen repeatedly aiming a green laser into (we presume) Ngo’s and other people’s faces in an attempt to blind them.

Assault is not peaceful, nor is it a protest, nor a petition to the government for a redress of grievances.

It’s violence and ought to be treated as such. 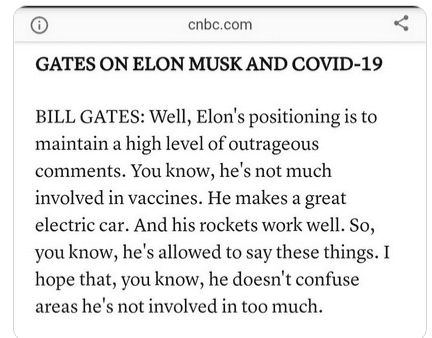 When Insanity Wrap came across this item earlier today on Instapundit we were immediately taken aback, although, on reflection, we realize we shouldn’t have been.

It’s just that we’re so American, right down to our very bones, that any expression of noble entitlement is something we believe belongs overseas, in those other places, and not spewing from the mouth of an American entrepreneur who has enjoyed and made use of American liberties better than most.

But noble entitlement is exactly what Bill Gates expressed here when he said that Elon Musk is “allowed to say these things,” these awful, unorthodox things because Musk, like Bill Gates, is a very rich man.

Maybe Insanity Wrap is reading too much into one little statement, and if so maybe we’ll need to apologize later for what we’re about to write. But this little rant and Gates’ better-than-thou attitude have both been brewing for a very, very long time.

But our takeaway from what Gates said is that the First Amendment applies only to those with noble entitlements, you see.

The rest of us — and that means you, bub — are supposed to sit down and shut up while our betters discuss important things.

Your job is to nod along in agreement when the Great Men speak, and if one Great Man sometimes says something outside the party line, well isn’t that just adorable?

Insanity Wrap would like to remind you that Bill Gates earned billions selling software not because he was a brilliant software developer. Rather, Gates had a genius for licensing, for lock-in strategies like his dubious “embrace and extend” effort to hijack open web standards, and for sometimes unconscionable anticompetitive practices.

So Insanity Wrap would like to say one thing to Bill Gates: You, sir, are a second-rate programmer and a third-rate American, and no amount of money can disguise those facts.

#BLMTerrorists Harass Couple For Removing BLM Signs From Their Business & threaten to shut their business down ! pic.twitter.com/wW9WiJx4fz

In which BLM bully-boys threaten small business owners to toe their political line, or else.

All because Mr. and Mrs. Small Business Owners had the temerity to remove the BLM propaganda that had been posted on their property.

Bring RICO down on these postmodern mobsters.

Previously On Insanity Wrap: Biden Gets Lost in a Gym, Plus Murder Hornets Mystery Solved

We Knew the NBA Was in Bed with Beijing But This…

American coaches at three NBA training academies in China told league officials their Chinese partners were physically abusing young players and failing to provide schooling, even though commissioner Adam Silver had said that education would be central to the program, according to multiple sources with direct knowledge of the complaints.

The NBA ran into myriad problems by opening one of the academies in Xinjiang, a police state in western China where more than a million Uighur Muslims are now held in barbed-wire camps. American coaches were frequently harassed and surveilled in Xinjiang, the sources said. One American coach was detained three times without cause; he and others were unable to obtain housing because of their status as foreigners.

A former league employee compared the atmosphere when he worked in Xinjiang to “World War II Germany.”

Plus: “One American coach who worked for the NBA in China described the project as ‘a sweat camp for athletes,'”

Insanity Wrap believes one of the biggest mistakes this country has made in recent decades was allowing our news and entertainment industries to grow dependent on Communist Chinese dollars, because, as Ben Thompson wrote earlier this month, “China is not simply resisting Western ideals of freedom, but seeking to impose their own.”

Once you hear it, you can't unhear it… pic.twitter.com/5MJ6CuQegT

Insanity Wrap has been unable to unhear this for the last three hours, which is why we choose to so generously inflict it on you, too, gentle reader. 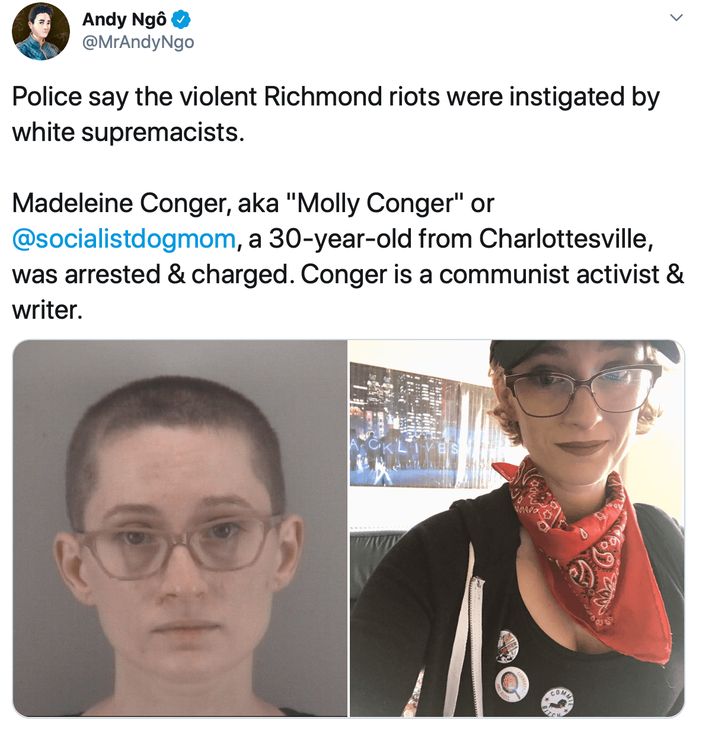 Actually, it’s the other way around from the headline, but the correct way around was less shocking than it was completely blasé.

Insanity Wrap takes no position on what people should or should not wear during their free time. During our San Francisco days, we knew more than one drag queen, and they were fun, lovely people—one of whom was actually a very attractive young lady who enjoyed dressing and making herself up so that she might be mistaken for a drag queen.

But then it got so political to the point where we have communist agitators working very hard to look like white supremacists because apparently America doesn’t produce enough of them to keep up with left-wing demand.

Andy Ngo has again put together an invaluable Twitter thread exposing these communists for who they really are — a real rogues gallery of America’s least wanted, starting with one Madeleine “Molly” Conger.

We thought Ms. Conger’s red bandana was an especially nice touch since it’s straight out of the Party uniform worn by Julia in 1984.

Did Ms. Conger ever read that book?

Insanity Wrap is afraid she has, instruction-manual style.

Or, hell, if you have some rivals or enemies you need to dispose of, go ahead and plant all the seeds you want.

Just don’t come to us when things go awry.

Previously On Insanity Wrap: Seductive Mask Appeal, Plus the Debate-Debate