Insanity Wrap needs to know: When did it become piggish to look a woman in the eyes?

Answer: There’s just no pleasing some people and frankly we give up.

Before we get to that, a preview of today’s Wrap:

• Google wants under your skin, literally.

• Joe Biden must and must not debate Donald Trump

I thought Black Lives Matter was supposed to be a peaceful movement?

In which a peaceful protestor throws a peaceful bomb peacefully over a fence erected to protect the courthouse from all the peacefulness.

If we keep saying it, maybe it will become true. 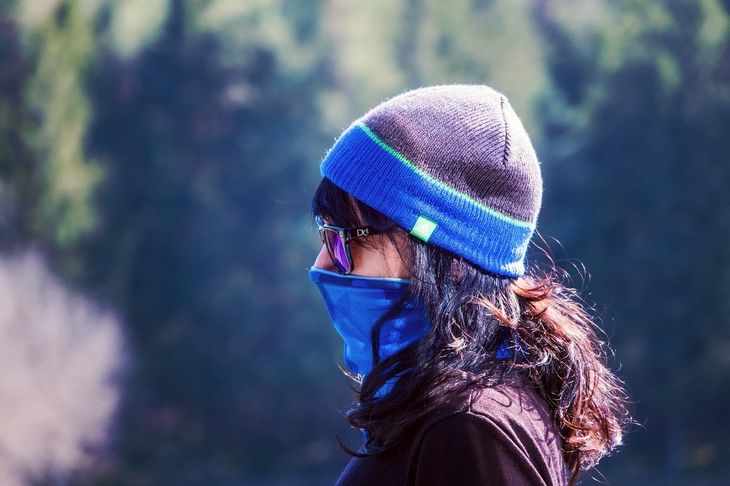 (Image by NickyPe from Pixabay.)

The New Hotness: “STOP LOOKING AT MY EYES, CREEPER!”

We wish we were making this up, but here’s the latest damn thing men do that’s just awful:

Are masks giving men a licence to leer? Women report a rise in ‘aggressive eye contact’ since face coverings became commonplace as an expert warns they ‘provide anonymity’ for threatening behaviour.

Here are a few of the complaints, copied verbatim from the subset of a social media site which we suppose is known as Lonely Cat-Lady Twitter.

• Does anybody else feel like men are way more aggresively demanding eye contact in public since we all started wearing masks?

But this being the Daily Mail, check out the sidebar to the article complaining about men leering at masked women. 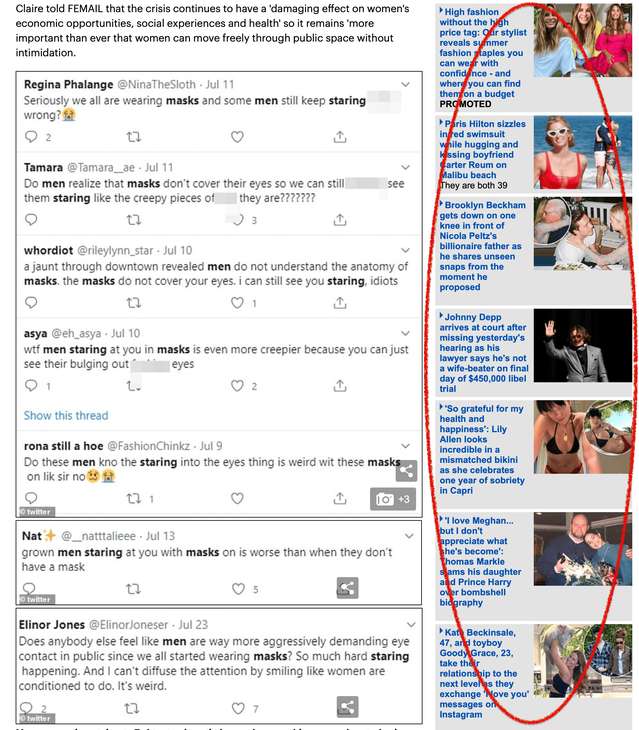 The sidebar is one of the Daily Mail’s most popular features, and it always features pretty women wearing skimpy clothes or swimsuits — or less.

The sidebar is named — Insanity Wrap kids you not — “Femail Today.”

Because even women like to look at pretty women who aren’t wearing very much.

So to the women complaining, basically, that men have eyeballs, Insanity Wrap would like to say: We’ll stop looking when you stop looking.

Heh. Just kidding. Not even then.

Question of the Day

Can someone just briefly explain to me how this outdoor concert is different from an outdoor protest? https://t.co/ujkoc5zaUB

It’s different because shut up.

Stopping people from worshipping at their churches is a matter of public safety. Allowing rioters to take over the streets and blind federal agents with lasers is just a (mostly!) peaceful protest strengthening our civic sinews or something.

It’s all a bit complicated and the details aren’t very interesting.

Insanity Wrap is all a-tingle with the upshot.

Previously On Insanity Wrap: Another Day in Antifa Paradise, Plus Pelosi’s Failed Meme

Insanity Wrap takes the position that even if CNN doesn’t fire Stelter, they could improve their ratings immeasurably by slightly altering the format of Reliable Sources. Instead of having Stelter go on and on about how awful Fox News is, the show could instead just be Stelter sitting next to a TV with Fox News on it.

We Can’t Improve on This

Das Kapital in a nutshell pic.twitter.com/mG44mMkitx 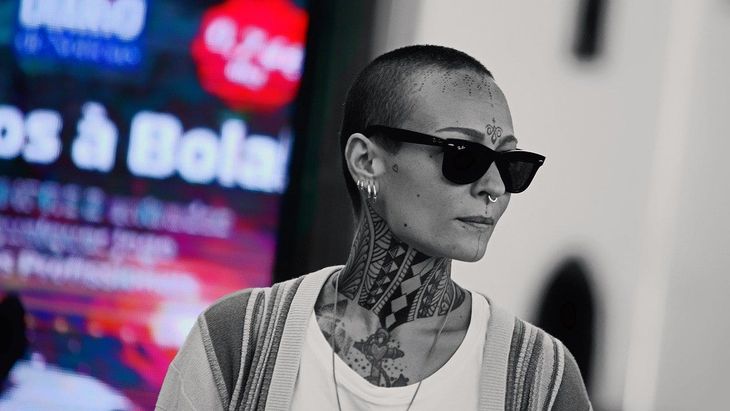 (Image by dpexcel from Pixabay.)

“Google is working on smart tattoos that, when applied to skin, will transform the human body into a living touchpad via embedded sensors.”

It puts the tattoos on its skin and then it gets the Google again.

Uh-uh. No way. Not gonna happen.

Insanity Wrap will have you know, however, that we are no technophobes.

We begged for, and received, a TI-30 calculator back when that was still a somewhat major purchase. We were the first of our friends to have their own computer, even if it was merely a gently used Commodore VIC-20 bought with $99 of lawnmowing money. Our first modem was 300 baud. Our first online service was The Source. Our first contact with the internet was via a dumb terminal, and we were unaware that it was called the internet.

In short, Insanity Wrap is a gadget freak and has been for a very long time.

The thing is, we are not the gadget.

But mostly we don’t want any tattoos because we are exurbanites in our fifties, and way too old to be starting in with that trendy urban crap.

Suppose They Threw a Debate and Only One Side Showed Up?

It was the commentary of author Thomas Friedman that got me asking if this is a legitimate tactic: could the Biden Team seriously be considering the idea that they could keep presumptive Democratic presidential nominee Joe Biden off the debate stage? Could they really keep him from debating President Donald Trump going into November?

Insanity Wrap would like you to acknowledge the pickle the Democrats are in with Joe Biden.

To be more exact, it plays to his increasing weaknesses.

Or to be perfectly exact, hiding in the basement is the best Biden can do given his obvious and rapid mental decline.

On the other hand, as Election Day draws closer, Americans are paying closer attention to the presidential race, and in increasing numbers, Americans are noticing — and are concerned by — Biden’s issues.

Biden could put a stop to all those worries by putting on a strong debate showing.

Or he might show up at the debate without his pants on, yammering on about getting “five bees for a quarter” before challenging the female debate moderator to an actual pissing contest.

It’s a helluva situation the Dems put themselves in, nominating a 77-year-old mediocrity like Biden, who was never a close acquaintance with reality even as a much younger man.

While Insanity Wrap can’t deny the absurdity of the Dem’s self-own, this is all the sympathy we can muster. 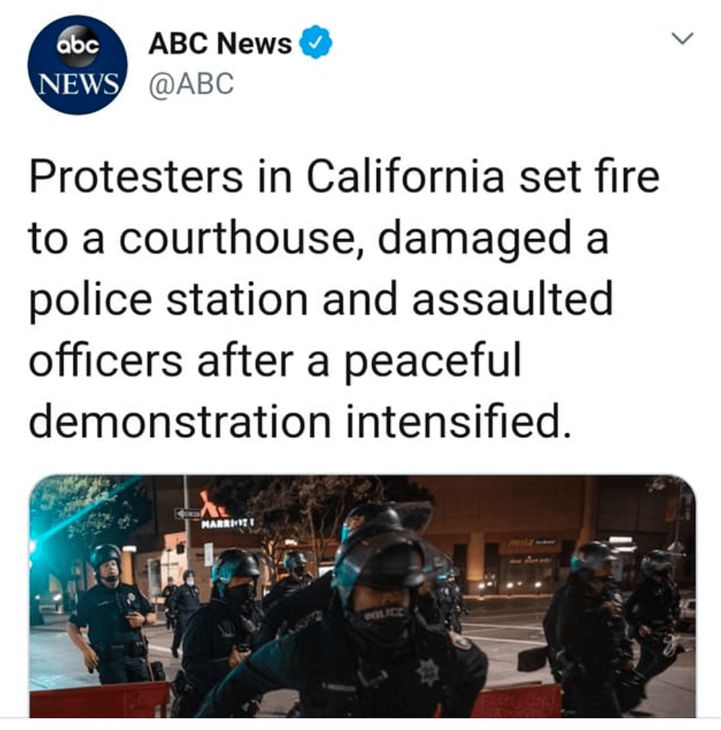 If anyone can actually get gaslit by anything so obvious, they were probably pretty lit to begin with.