“We are working toward a more just society, but that means building up, not tearing down. Joining hands, not hurling fists. Standing in solidarity, not surrendering to hostility,” the Trump campaign tweeted with the video. 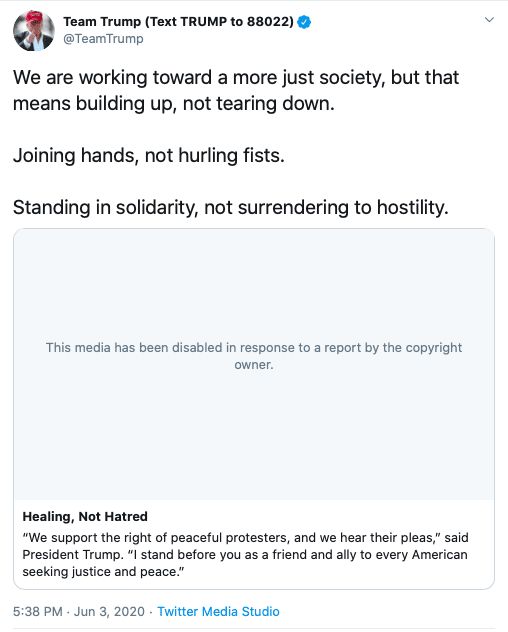 While Twitter has removed the video for an alleged copyright violation, YouTube has not removed it. The video is indeed a moving tribute to George Floyd and a call for unity in this painful time. It features a torrent of images showing George Floyd, the peaceful protests over his death, the violence of looters and rioters, and the moving videos of police officers hugging Black Lives Matter activists. The video includes Trump’s speech as a voiceover. It ends with a call to peaceful protest against the violence of antifa.

Trump’s tribute and call for unity

“The death of George Floyd on the streets of Minneapolis was a grave tragedy. It should never have happened. It has filled Americans all over the country with horror, anger, and grief. We support the right of peaceful protesters and we hear their pleas. The voices of law-abiding citizens must be heard, and heard very loudly,” Trump says in the video.

Here’s the Real Story on George Floyd, Police Abuse, and Racism, and What You Should Do About It

“We will stand with the family of George Floyd, with the peaceful protesters, and with every law-abiding citizen who wants decency, civility, safety, and security. But what we are now seeing on the streets of our cities has nothing to do with justice or with peace. The memory of George Floyd is being dishonored by rioters, looters, and anarchists. The violence and vandalism is being led by Antifa and other radical left-wing groups,” the president adds.

“The mobs are devastating the work of good people and destroying their dreams,” Trump says. “It harms those who have the least. We cannot and must not allow a small group of criminals and vandals to wreck our cities and lay waste to our communities. We must defend the rights of every citizen to live without violence, prejudice, or fear.”

The president concludes with a call to unity. “Healing, not hatred, justice, not chaos, are the mission at hand,” he says. “No one is more upset than fellow law enforcement officers by the small handful who fail to abide by their oath to serve and protect.”

“We are working toward a more just society, but that means building up, not tearing down,” Trump insists. “Standing in solidarity, not surrendering to hostility.”

A Twitter spokesperson told PJ Media that a copyright holder filed a claim under the Digital Millennium Copyright Act (DMCA) that affects the Trump campaign’s tweet. Twitter sent PJ Media a link to the complaint in the Lumen database, a third-party research group Twitter uses to check copyright claims. The complaint traces back to the law office of Sam Koolaq, a Harvard Law graduate based in Los Angeles. He has only one tweet, dating back to 2016.

Twitter’s removal of the video comes after the social media platform added an extremely biased “fact check” to Trump’s tweet warning about vote-by-mail schemes, and after it claimed another of Trump’s tweets violated its policies by “glorifying violence.”

“This incident is yet another reminder that Twitter is making up the rules as they go along,” Trump campaign spokesman Andrew Clark told The Hill. “From the dubious removal of the hilarious Nickelback video to capricious fact checks and manipulated media labels to questionable claims of copyright, Twitter has repeatedly failed to explain why their rules seem to only apply to the Trump campaign but not to others. Censoring out the president’s important message of unity around the George Floyd protests is an unfortunate escalation of this double standard.”

The Trump campaign said it reached out to Twitter to ask who owned the copyright and how the video had run afoul of Twitter’s copyright policy.

So long as the video remains on YouTube, Americans can still access it. Twitter’s action may draw more Americans to see the video, an important call to unity in this trying time.

George Floyd Would Have Condemned the Riots. Here’s How We Know.