In Attacking Trump, Twitter Just Made the Case Against Its Own Immunity From Lawsuits

On Tuesday, Twitter took the unprecedented step of issuing a “fact-check” on a pair of tweets from the president of the United States. President Donald Trump had tweeted a condemnation of Gov. Gavin Newsom’s (D-Calif.) executive order mandating that Californians can vote by mail in the 2020 election. Twitter took an unabashed editorial stance in favor of vote by mail, creating an “event” consisting wholly of left-leaning outlets condemning the president’s stance. This was particularly egregious because the California and national Republican Parties had filed a lawsuit challenging Newsom’s order. Twitter effectively picked sides in an active legal battle.

“There is NO WAY (ZERO!) that Mail-In Ballots will be anything less than substantially fraudulent. Mail boxes will be robbed, ballots will be forged & even illegally printed out & fraudulently signed. The Governor of California is sending Ballots to millions of people, anyone living in the state, no matter who they are or how they got there, will get one,” Trump tweeted. “That will be followed up with professionals telling all of these people, many of whom have never even thought of voting before, how, and for whom, to vote. This will be a Rigged Election. No way!”

….living in the state, no matter who they are or how they got there, will get one. That will be followed up with professionals telling all of these people, many of whom have never even thought of voting before, how, and for whom, to vote. This will be a Rigged Election. No way!

On Tuesday afternoon, Twitter added a blue warning to Trump’s tweets reading, “Get the facts about mail-in ballots.” 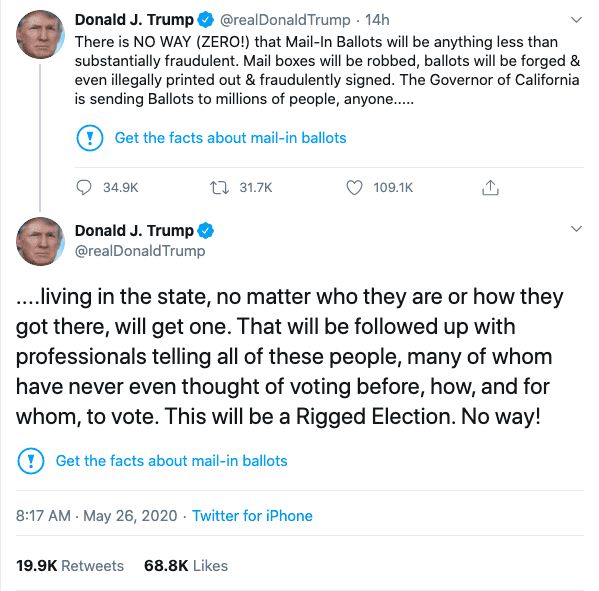 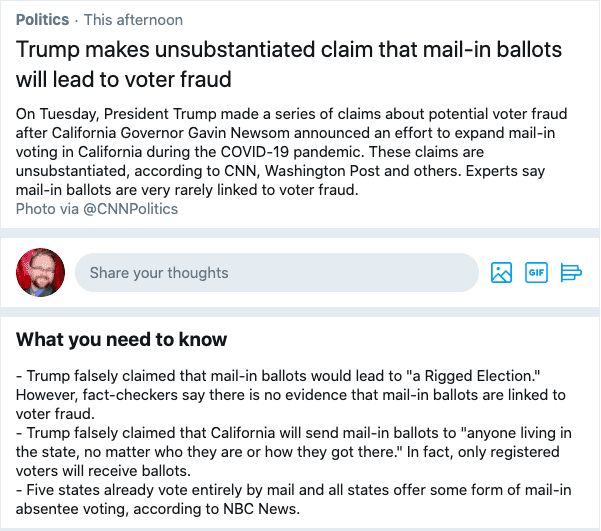 Sure, left-leaning “fact-checks” dismissed the president’s claims, but the Twitter staff who created the “Event” knew that the Republican Party filed a lawsuit against Newsom’s order on Sunday. Staff included only one tweet that did not condemn Trump — RNC Chairman Ronna Romney McDaniel’s announcement of the lawsuit. 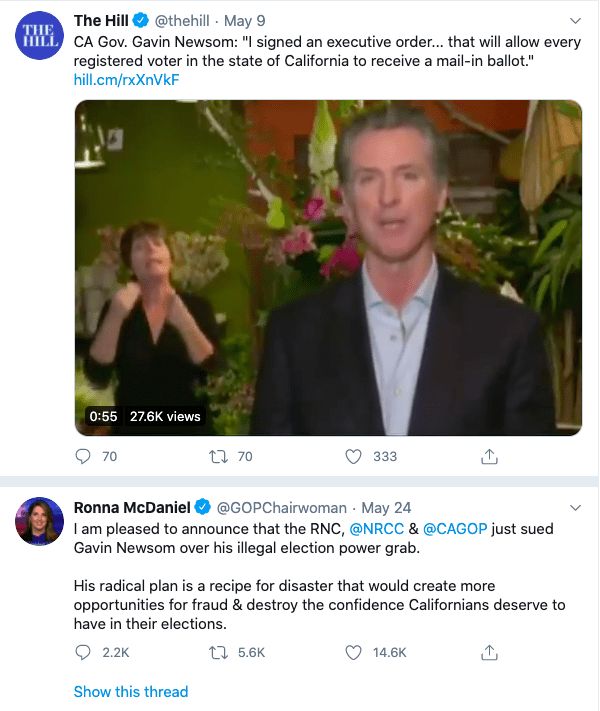 Perhaps if Twitter’s staff had taken a few minutes to examine the lawsuit filed by the Republican National Committee (RNC), the National Republican Congressional Committee (NRCC), and the California Republican Party, they would have realized that there are also experts who oppose vote by mail.

Valid concerns about vote by mail

That lawsuit does not argue in Trump’s hyperbolic terms, of course. The lawsuit acknowledges that “vote-by-mail can be a legitimate feature of a state’s election process, when coupled with adequate procedural safeguards to deter fraud.” However, it does cite many studies to warn that absentee balloting is vulnerable to abuse in several ways.

Absentee voters may be more susceptible to pressure or intimidation at home, in the workplace, in nursing homes, or at church, for example. Vote-by-mail systems also enable ballot harvesting, where third parties collect absentee ballots from voters to drop them off at polling places. In some cases, workers collecting ballots have entered into voters’ homes to help them fill out their ballots. In most cases, voter registrations are out of date, so ballots arrive at the wrong address and some ballots arrive addressed to deceased voters.

Similar problems reportedly took place in Paterson, New Jersey, in the May 12 election for Second Ward City Council. More than 800 mail-in ballots were set aside due to suspicion that they were gathered illegally. In one case, 366 ballots were picked up from the same mailbox.

“Democrats pushed these changes long before COVID-19 because they believe that the resulting free-for-all will help their electoral prospects. Unable to persuade legislatures to adopt these changes, Democrats have turned to the courts, arguing that COVID-19 means that their preferred changes are now mandated by the Constitution,” the suit alleges. “But COVID-19 does not warrant throwing out longstanding safeguards that protect the integrity of elections. In fact, it makes those safeguards more important.”

The suit quotes Florida State University law professor Michael Morley, who warned in a March 2020 paper that “even when voter registration records are accurate, voters may not be staying at their addresses of record. If stay-at-home orders remain in place, voters may be staying with family or friends for the duration of the quarantine. Thus, automatically mailing out millions of ballots to addresses where voters may not be located will lead to millions of unaccounted-for ballots, facilitates ballot theft, and can lead to inadvertent or intentional double voting.”

California is not ready for a transition to mail-in voting. Last year, Los Angeles County had to remove up to 1.5 million ineligible voters due to a court settlement in which the county admitted it had a registration rate of 112 percent. Los Angeles County is not alone in having more registered voters than adults living in the county, however. The Election Integrity Project California has reported that as of February 18, 2020, 13 California counties — which represent about 46 percent of the state’s population — have more registered voters than eligible citizens.

Indeed, the Democrats seem to push vote by mail for political reasons. House Speaker Nancy Pelosi smuggled in vote-by-mail election overhauls into coronavirus relief bills in March and again in May, as Rep. Jim Clyburn (D-S.C.) said the crisis was “a tremendous opportunity to restructure things to fit our vision.” Presumptive Democratic nominee Joe Biden has called the coronavirus an “opportunity” for “structural change” on voting. Leftist foundations have dedicated millions to push mail-in ballot schemes.

The lawsuit claims that the coronavirus crisis does not give Newsom the constitutional authority to change California’s election system — only the legislature can do that. Even worse, Newsom’s executive order enabling vote by mail took place when he had already started lifting lockdown restrictions.

Newsom proclaimed a state of emergency on March 4 and issued a stay-at-home order on March 19. By April 28, however, he had announced a four-phase plan for reopening the state.

On May 8, the state moved to Phase 2, and Newsom explained that Phase 3 “may not even be more than a month away.” Yet on the same day the governor highlighted the progress in slowing the spread of the coronavirus, he issued an executive order which relies on the current state of emergency to rewrite California’s election laws for an election that is six months away. After issuing that order, Newsom has continued to indicate that he will lift more of the lockdowns.

“This inconsistency, coupled with [the elections executive order]’s timing amid a nationwide push by the Democratic Party for the same measures, reveals that the Order is less about protecting the health of Californians and more about protecting the electoral prospects of the Governor’s political party,” the Republican Party lawsuit states.

It’s hard to disagree with that logic.

Twitter may have intended merely to run a fact-check and prevent what the left-leaning staff at the tech company think of as misinformation. However, the Big Tech platform just gave a powerful argument to reformers who want to strike the liability protections Twitter enjoys under Section 230 of the Communications Decency Act.

Under that law, Twitter and other online platforms are not considered “publishers” or “speakers” and are therefore not held liable for the information they host. Yet an action like this, taking sides in a political and legal dispute where there are experts on both sides, arguably makes Twitter a “speaker” or a “publisher” and therefore liable, at least for this act of pseudo-censorship.

Twitter is not regulated by the First Amendment. It doesn’t have to protect free speech. Yet Trump’s statement that the platform is “completely stifling free speech” expresses due outrage over Twitter’s stifling of his speech. Twitter did not violate the First Amendment, but it arguably violated Section 230, stripping the central argument for its special legal status.