EXCLUSIVE: Is the Woke Head of 'Human Capital' at the Veterans Health Administration Guilty of Résumé Fraud?

On Wednesday, April 21, according to an email she sent to VHA staff, Bonjorni is scheduled to testify before a U.S. House committee on numerous issues, including VA background checks. 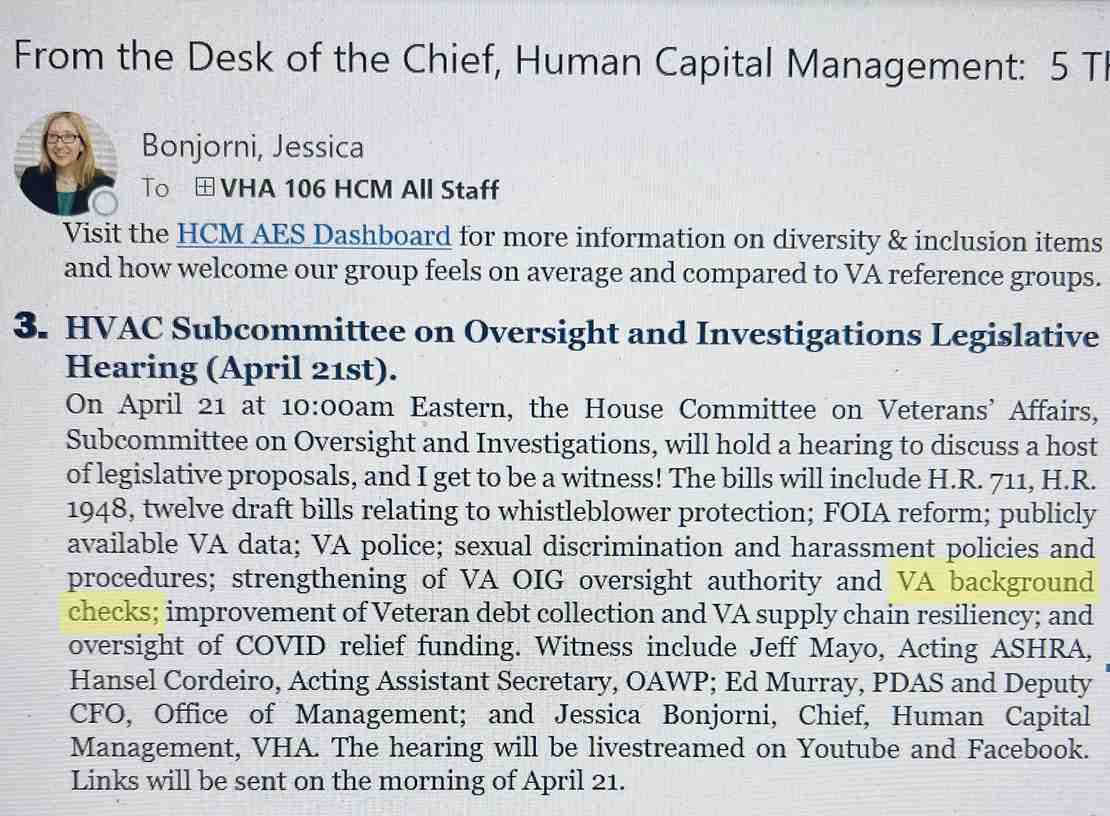 Prior to her current position, from 2018 Bonjorni was the acting assistant deputy undersecretary for health for workforce services at the VHA, according to this online resume. Such positions “involve all aspects of human resources, including hiring, workforce management, leadership development, training and organizational development,” according to this VA piece.

Prior to moving over to the VHA, Bonjorni worked at the Federal Bureau of Investigations in its human capital division. According to the online resume linked above, Bonjorni has her MBA from Harvard (2006) and a degree in astrophysics from Smith College (2000).

Smith College, located in Northampton, Mass., has been in the headlines recently. Smith graduate Jody Shaw resigned her staff position at the college due to what she described as a pervasive toxic work environment due to its emphasis on race and critical race theory. In her letter to the dean explaining her resignation, Shaw wrote:

Every day, I watch my colleagues manage student conflict through the lens of race, projecting rigid assumptions and stereotypes on students, thereby reducing them to the color of their skin. I am asked to do the same, as well as to support a curriculum for students that teaches them to project those same stereotypes and assumptions onto themselves and others. I believe such a curriculum is dehumanizing, prevents authentic connection, and undermines the moral agency of young people who are just beginning to find their way in the world.

Bonjorni is a graduate of the same Smith College, albeit 21 years ago. Her entire federal career is in the human resources or human capital space, which as noted above deals with personnel management decisions including hiring and the criteria and standards by which hires are made and employees are terminated. Bonjorni wields enormous authority and influence within the Veterans Health Administration.

There appears to be a discrepancy over the degree Bonjorni claims to have earned from Smith College versus the one she actually holds.

Bonjorni’s online résumé states that she holds a Bachelor of Arts degree in astrophysics, earned in 2000, at Smith College. According to a whistleblower case that has been filed with the Veterans Affairs Office of Whistleblower Protections in February of 2021 concerning this and other aspects of Bonjorni’s leadership, Smith College did not offer an astrophysics degree in 2000 and still does not. Smith offered a degree in astronomy in that time frame but did not begin offering even a minor in astrophysics until 2003. Note the last line in this screenshot of Bonjorni’s online bio.

This record from Smith College of its year 2000 graduates and their majors corroborates the fact that the college did not offer an astrophysics major in that year. The record indicates one astronomy graduate in 2000, presumably Bonjorni. There were 11 physics graduates that same year. 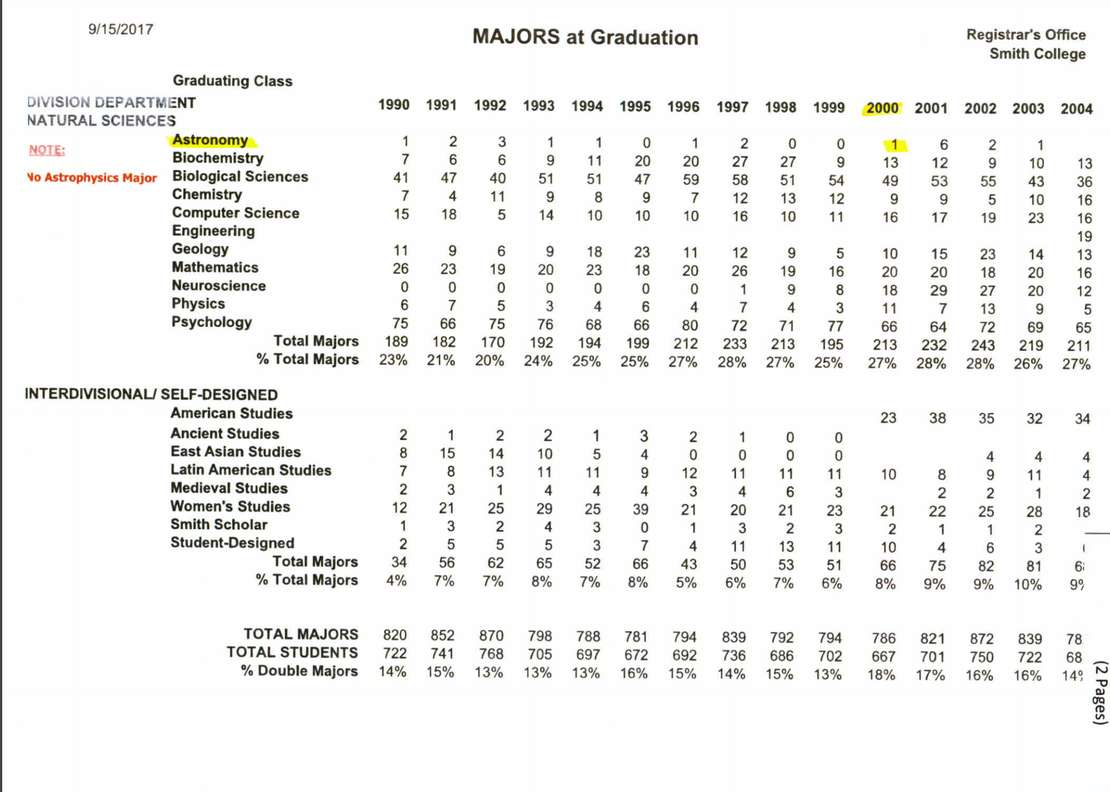 The distinction between a degree in astronomy versus astrophysics may seem subtle; the latter is generally a subcategory or specialty of the former. But the difference as a field of study is not as subtle as it may seem. Smith College does not offer a degree in astrophysics and it did not when Bonjorni graduated, in 2000.

Its course offerings in astronomy are noted here, as is the separate minor in astrophysics, which was first offered three years after Bonjorni graduated. The astronomy major is light on mathematics, with just four courses across four years dedicated to it.

Since Smith does not offer a major in astrophysics, we can look to nearby Williams College, which does, to compare the two courses of study. According to Williams’ website describing its Astrophysics major:

An essential ingredient in such students’ undergraduate training is experience in physics and mathematics. Therefore, the major normally will begin in the first year a student is at Williams with Physics 131 or 141 or 151 and Math 140 in the fall continuing with Physics 142 and Math 150/151 in the spring. Students with very good backgrounds placing them out of Physics 142 may elect Physics 201 instead. Astronomy 111 could therefore be taken in the sophomore year, however exceptionally motivated students can consider taking it their first semester at Williams along with physics and math.

Astrophysics is math-heavy; astronomy is not. Universities break the two fields of study out along separate courseloads.

Because Smith did not offer an astrophysics degree in 2000 (when Bonjorni graduated) and still does not, the claim on her résumé cannot be chalked up to simple error. Bonjorni makes the exact same, false, claim on her publically available LinkedIn profile.

Casting the net a bit wider, Smith College is a member of the Five College Consortium which includes UMass Amherst, Amherst College, Mount Holyoke College, and Hampshire College. Only one of the five, UMass, offers any type of astrophysics major (a combination astronomy/astrophysics program, which by its name differentiates between the two fields). The other four do not. Amherst College, for instance, breaks the two courses apart under its Department of Physics & Astronomy. It offers a course on astronomy and a course on physics, but not astrophysics.

This website lists all of the colleges in the United States that offer astrophysics degrees in 2021. Williams College, as noted above does offer an astrophysics program and does appear on this list. Smith College does not.

The fact that Bonjorni won an academic award for a paper she wrote in her field of study further emphasizes the point that claiming an astrophysics degree, when Smith College does not offer one, cannot be an error. Also keep in mind, Bonjorni is the head of human capital for the VHA and would understand the consequences for claiming to hold a degree that is different from the one a job applicant or staff member actually holds. Bonjorni has likely had the task of establishing and implementing standards and consequences for résumé padding and fraud. Optional Federal Form OF-306 indicates that any false statements made on the form may be grounds for not being hired for federal or federal contract employment, or for being fired after an employee is hired. Filling out the OF-306 is required of all federal and federal contract employees, according to ClearanceJobs.com. The Office of Personnel Management sheds additional light on when the OF-306 is filled out.

When she isn’t pushing woke critical race theory on her staff at the VHA, Bonjori engages in political protests, which is perfectly legal, if revealing of her politics, and isn’t shy about letting her hair down and posting about it on social media. The following images are from her Instagram feed and that of a friend. 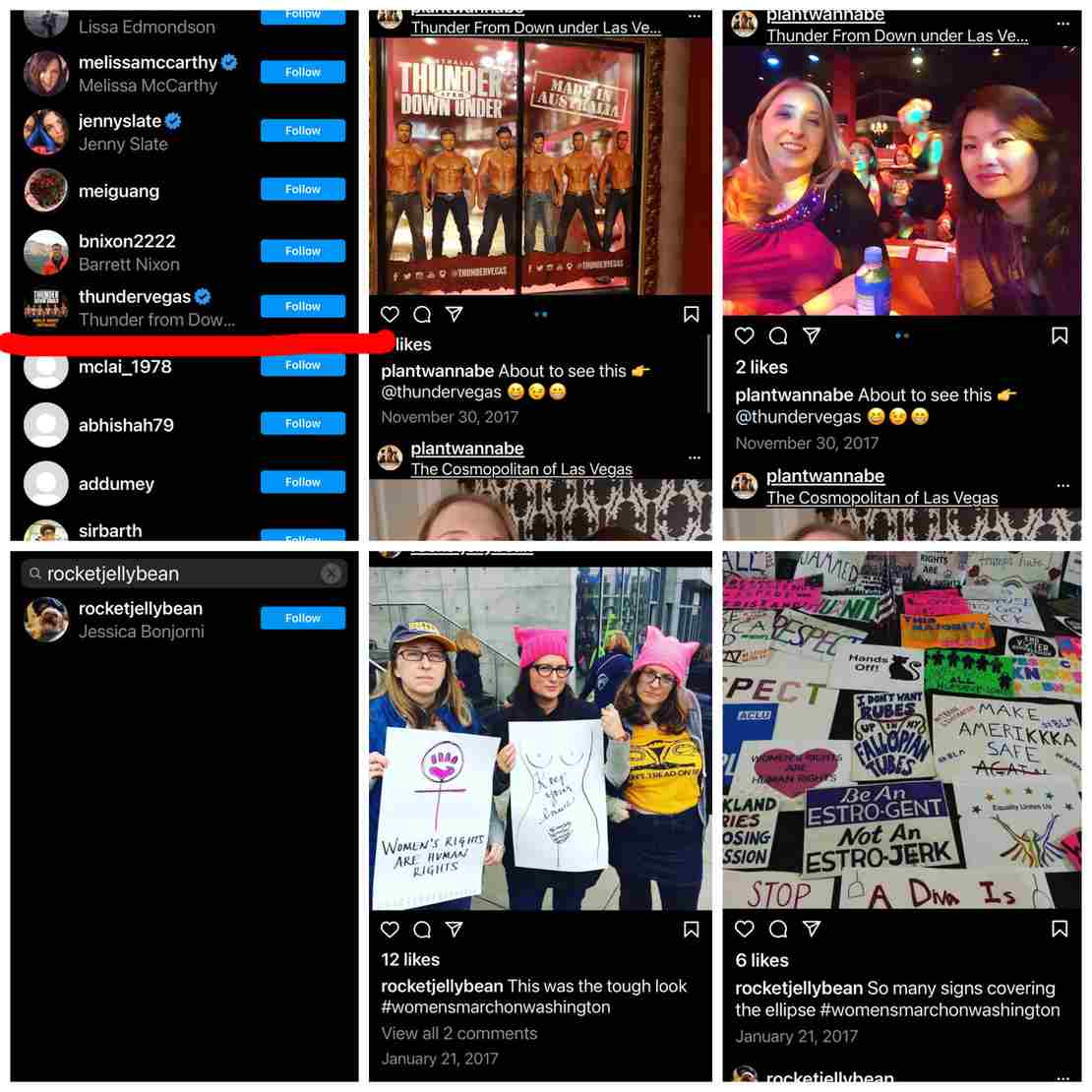 Thunder From Down Under is an all-male review that bills itself as “Australia’s HOTTEST export” while promising “chiseled bodies” and “seductive dance routines.” Viewing the scantily-clad team is perfectly legal, but imagine if the male head of a vast federal human resources division was caught posting on social media bragging about attending a similar show featuring female performers.