Jessica Bonjorni is the chief officer of human capital at the Veterans Health Administration (VHA). In this role, Bonjorni manages divisions including about 1,000 employees with a budget of about $1.2 billion. The VHA is America’s largest integrated healthcare system, according to its website, serving nine million enrolled veterans each year.

According to a source who reached out to PJ Media, Bonjorni brought her woke, critical race theory politics to the VHA last summer via email communications and unrecorded “open forums” in which she slammed America and promoted the divisive doctrine.

It began in June 2020. As riots swept across the country in the wake of George Floyd’s death, Bonjorni — who heads a large department within the VHA — convened the first forum online on June 12, 2020. According to the source, the first and subsequent open forums became vehicles for Bonjorni to express her belief in critical race theory. Bonjorni also expressed her intention to make critical race theory part of her management at the VHA.

Bonjorni is a graduate of Smith College, which has become infamous for imposing critical race theory — which reduces the complexity of life and personhood to boxes and categories of “oppressor” and “oppressed” — on its students and staff. Where it is practiced, critical race theory brings division and anger, not reconciliation or unity.

Critical race theory also teaches that America was founded on racism and slavery and is irredeemably racist. If that is the case, why should anyone ever defend it? Why honor veterans or give us any benefits? I pose these questions because Bonjorni manages a key department in a large federal agency that exists to serve veterans, including myself. 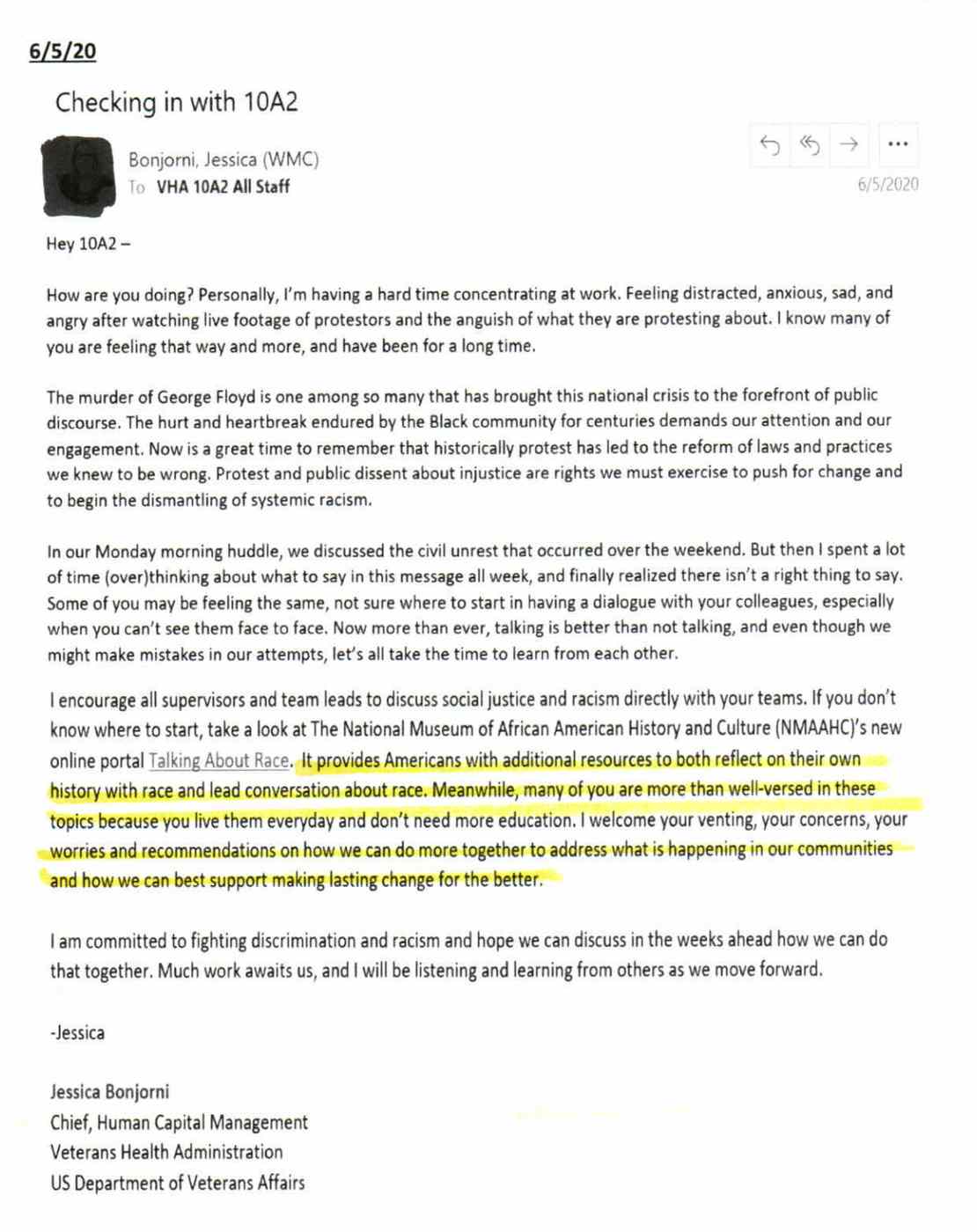 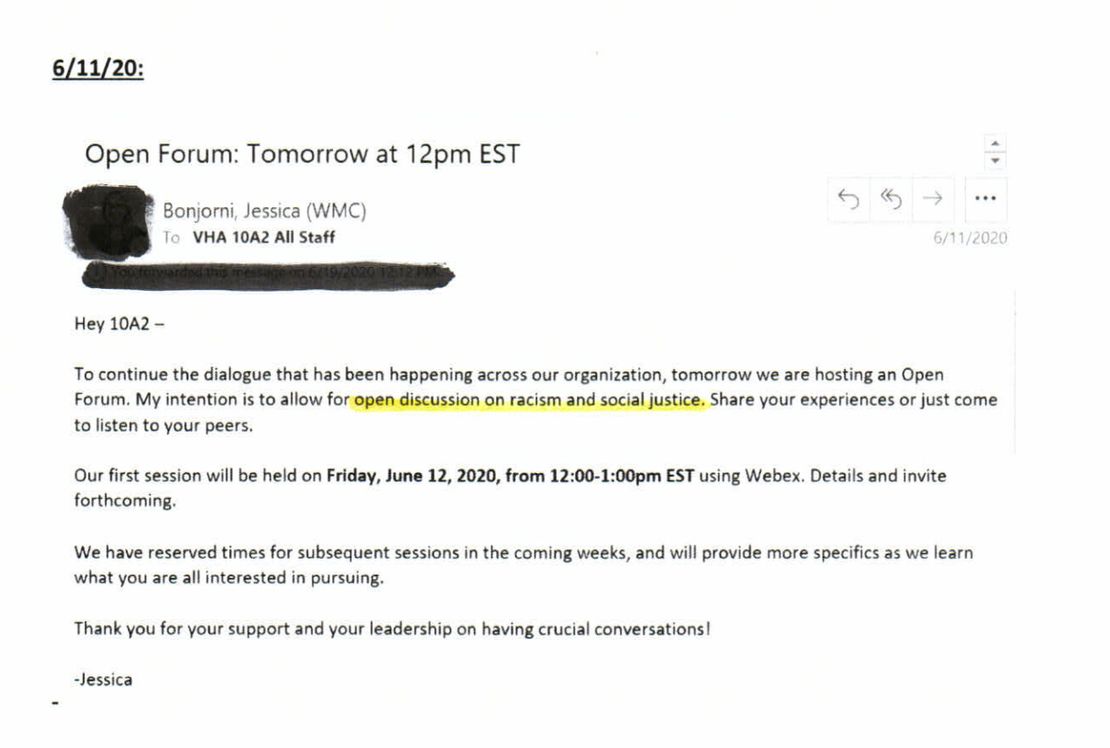 That’s a day ahead of the first “open forum” and set the tone.

The open forums were unrecorded. PJ Media’s source says Bonjorni used them to promote critical race theory and made inflammatory statements in them, such as that America’s founding was racist, and she could not even understand why anyone would disagree with that.

After the first couple of forums, during which one staff member reportedly called another a “racist” and called for that person’s firing — with no pushback or evidence sought to justify such incendiary, possibly life-destroying claims — Bonjorni sent out another missive to VHA human capital staff. This one suggests establishing a race-based star chamber within the VHA, under the name “internal diversity and inclusion council.” Bonjorni cites CRT proponent Ibram X. Kendi and introduces terms such as “microaggression” into the discussion. Bonjorni introduces and apparently tolerates no balanced evidence or opinion. 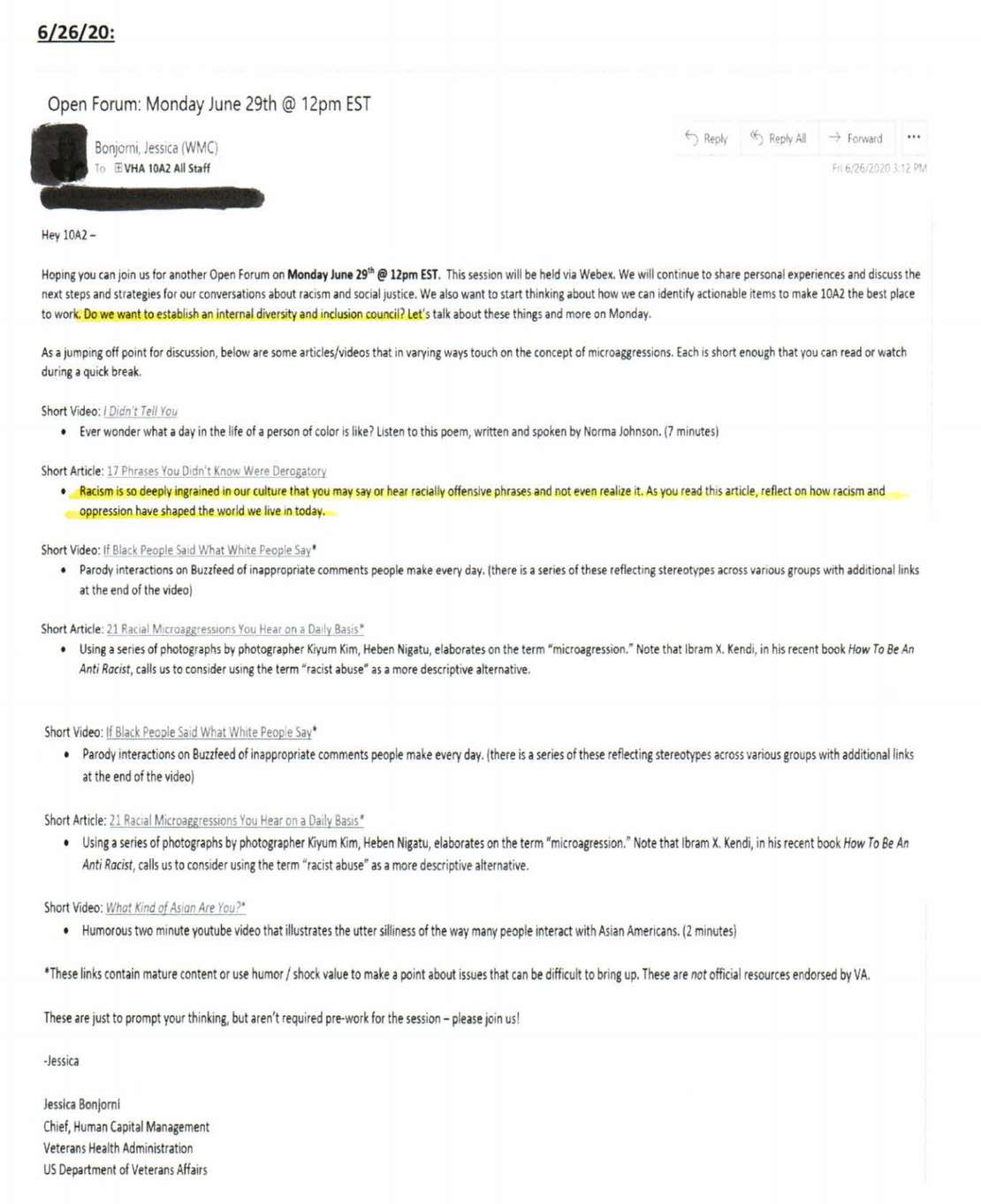 Bonjorni went quiet after Trump’s ban, sending out no more emails and hosting no more of the “open forums.”

That day, Bonjorni happily announced that the politicization of the Veterans Health Administration — along with the rest of the federal government — would resume. 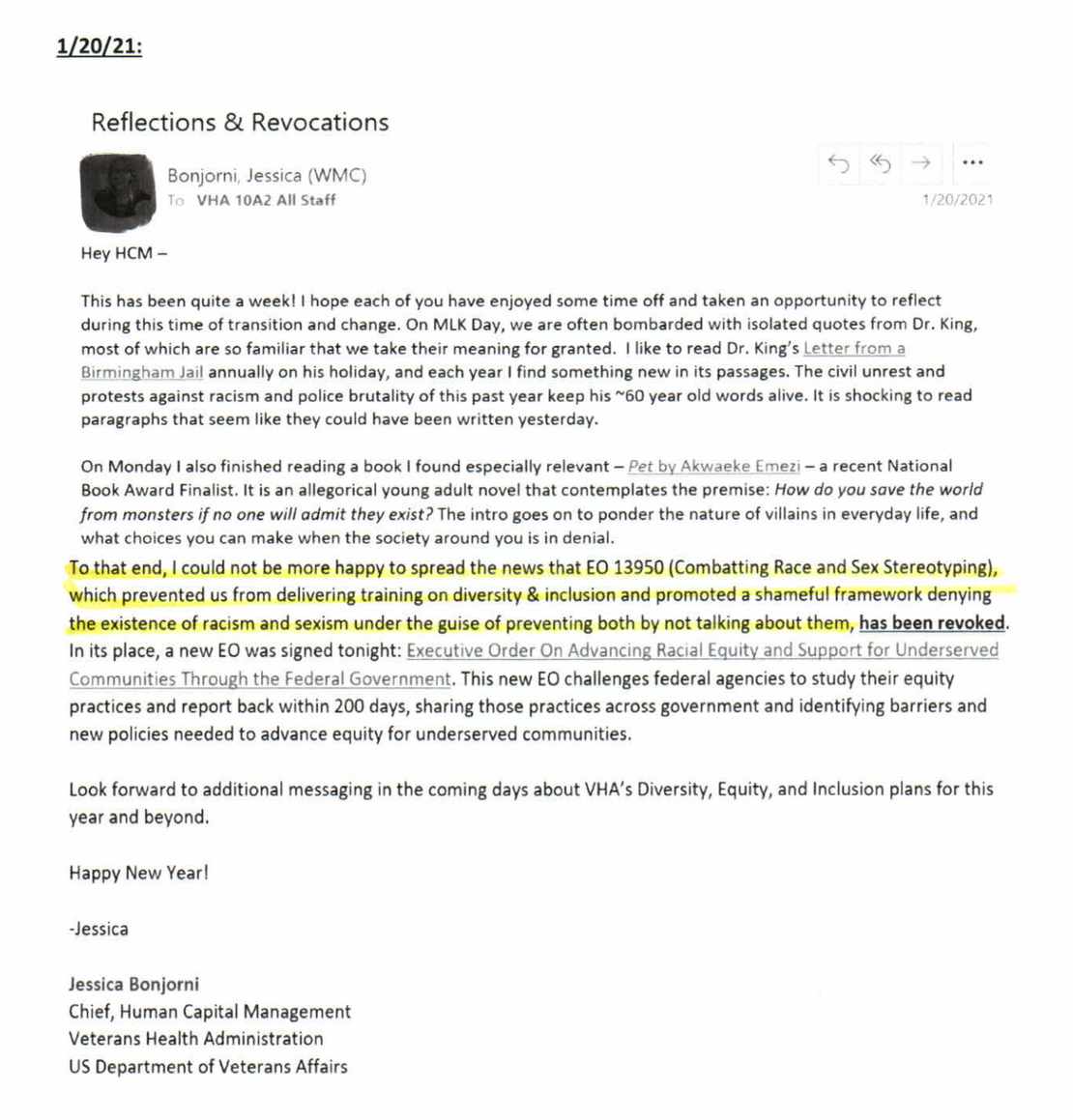 Bonjorni’s quote of Dr. Martin Luther King Jr. is deeply ironic. King called for everyone to be judged not by the color of their skin, but by the content of their character. Critical race theory rejects that, and judges people purely by skin color and to a lesser extent class, rendering their character, intentions, and actions meaningless.