We are five days away from Christmas and, as I’ve reported, we have much to celebrate. It’s time for a much-earned Christmas cocktail. But not just any cocktail — let’s have something patriotic.

I created these drinks with what I have in my bar. I should warn you, my apartment, the Atomic Bunker, has 18 “pandemic” months’ worth of clown juice lying around. I might have things you don’t. Also, I might have developed a drinking penchant.

Here are nine Christmas libations for conservatives to enjoy. Make sure your unemployed Antifa nephew finishes hers before you tell zhim what it just drank.

My favorite. Easy to make and delicious, even to those who haven’t yet learned to enjoy bourbon. P.S. Bourbon is an American spirit, so this cocktail is dee-lish and patriotic.

Triple Sec and bourbon? Yes. Make one drink in a glass or use a cocktail shaker to make enough for a “mostly peaceful” evening in Boston with your liberal sister-in-law.

IMPORTANT: After your drink is made, take a strip of orange peel, squeeze it thoroughly, light it on fire and toss it into the cocktail glass.

This is especially good for those Americans celebrating Christmas near our dangerous southern border. It requires using tequila that has entered the U.S. legally.

The jalapeno taste in this tequila is profound. One might call it a “wall” of flavor. I recommend going a little heavy on the lime juice, say, two ounces. The aroma of the tequila might summon a few Border Patrol Agents if Biden hasn’t fired them all over the stupid vaccine mandate.

You know better. Disregard this. Drink like an adult.

For the Let’s Go Brandon cocktail, you’ll need Lime gin (Let’s) Go (gin, orange) Brandon (bitters, also orange). Tanqueray makes a dandy orange gin that I love and a lime-flavored gin that I adore. Fever-Tree tonic is the best out there. This cocktail is a fancy gin and tonic.

Combine the first four ingredients in a cocktail shaker with ice. Shake vigorously, as though you have your hands around Pelosi’s shoulders. Pour into a glass, fill remainder with tonic. If there are no kids at your Christmas bash, this drink is also called the FJB.

Thanks to Sen. Joe Manchin, this cocktail is unavailable.

This is a glass of Bulleit bourbon, with chilled cocktail bullets to keep it cool. Again, bourbon is an AMERICAN spirit. ‘Nuff said. 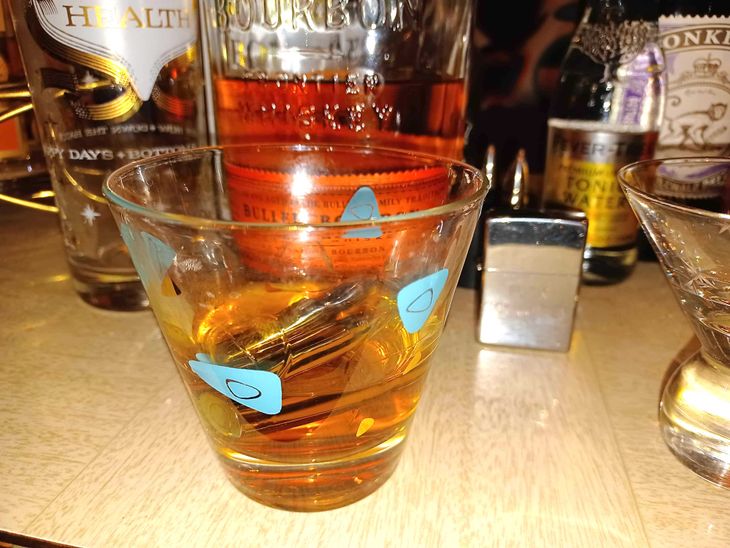 The BLM is a mostly peaceful drink. So they say. It’s also our only drink served on fire.

In order to enjoy this drink, douse the flame. Unless you’re serving it to a lib, in which case they’ll pretend it isn’t burning.

Pro tip: I set this on fire with an American-made Zippo lighter engraved with “F*** Communism.” No, I’m not kidding. See the pic of the 2nd Amendment cocktail.

The Rittenhouse is three shots of Absolute Raspberry, (get it, AR). This is the only bottle I don’t currently have. We opened it, and finished it, the day Rittenhouse was found not guilty of murder after he ventilated three Antifa creatures in self-defense.

Let’s face it, if you want to punch someone, it’s probably Antifa. This one is juicy. And much like Antifa, it’s a bit girly.

Serve in a scorpion bowl (because they don’t make a pansy bowl). Preferable to serve in a place without a strong 2nd Amendment presence. You may have noticed Antifa pulls their nonsense in places that don’t have a lot of gun folks, except for that night in Kenosha…

There you have it, folks. Christmas is upon us and things are looking bright. Merry Christmas. Yes, I said it: MERRY CHRISTMAS! Have a patriotic drink on me. If you have similar recipes, please leave them in the comments.

Kevin Downey, Jr. Is a comedian and columnist. When he isn't writing or performing on stage he is collecting surf records and perhaps practicing his mixologist skills at his tiki bar. His apartment, the Atomic Bunker,  looks like it was furnished from George Jetson's garage sale.