The Morning Briefing: Trump's Got COVID-19 and Now the Year Is Going To Get Really Ugly

Trump Gets Another Election Year Curveball

And #TGIF, of course.

Let us now begin our journey even deeper into Bizarroland.

I keep telling people not to ask what else can go wrong this year but people seem not to be taking my advice. Twenty-twenty seems to be offended by the question and always has an answer to it that nobody likes. Never tempt the universe. The universe is bored and does not take kindly to being trifled with.

The week was already weird enough with the lingering debate madness. That managed to capture the public’s imagination for three whole days, which is an eternity in this interminable year. Well, boys and girls, it looks as if we will be moving into the weekend with a whole new topic of conversation.

Tyler had the news:

In the wee hours of Friday morning, President Donald Trump announced he and first Lady Melania Trump had tested positive for COVID-19.

“Tonight, [the first lady] and I tested positive for COVID-19. We will begin our quarantine and recovery process immediately. We will get through this TOGETHER!

This doesn’t open up a can of worms, it opens up a warehouse of worms.

First, I think we are all aware that this is going to make the already unhinged American Left even worse. Buckle up for days of gleeful rejoicing that ORANGE MAN BAD has the Chinese Bat Flu. Most will probably be cheering for him to die. In a different era, I’d be awful for suggesting that American citizens might do that but we’ve all met these people. It’s early on Friday morning and I’m already seeing some awful stuff on Twitter. I won’t share any of it here because I don’t like to give people like that a bigger audience.

One thing this election didn’t need was another wrench thrown into the works to muck things up, especially for the president. He’s been gaining ground in the polls and a lot of that is because he’s been hitting swing states to campaign in person. At the most critical time of the campaign, he’s now sidelined. My pessimism about November just quadrupled.

A big worry of mine is whether Amy Coney Barrett will end up testing positive after having spent so much time in close proximity to President Trump last week. I hate even putting that into the universe by typing it because I feel it might trigger it into reality.

Yeah, I’ve got ego issues and truly feel I have that kind of power.

We really, really don’t need a delay in Barrett’s confirmation hearing. Let’s face it, however, every damn thing about this Chinese Bat Flu has served the Democrats. As I’ve written before, there are days that I’m convinced that the DNC has people working in the lab in Wuhan.

Anyway, our prayers are with POTUS and FLOTUS. Let’s hope they get through this quickly.

Enjoy the weekend, we’re going to be hitting some turbulence soon. 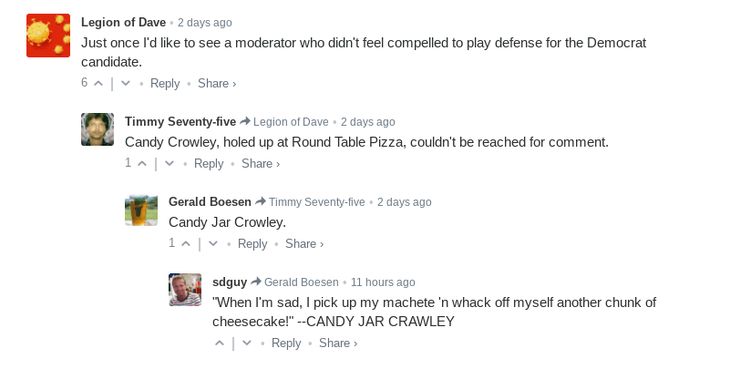 Always Biased NBC News Hacks: Trump Is the Only Reason Debate Rules Should Be Changed

Yeah…no. Hollywood Wants Us to Bail Out Movie Theaters

The Left Holds Its Fire as Biden Runs Away From Them

Don’t Be Suckered Into Diversion Over Debate Chaos

YEP. Trump Should Be the One to Cancel the Remaining Debates

VodkaPundit: Insanity Wrap #62: Is That a Pipe Bomb in Your Pocket Or Are You Just Happy to Arrest Me?

Seriously? Moderator of Second Presidential Debate Served as an Intern for Joe Biden

How Will the Media React to LeBron James Asking for 10,000 Volunteer Poll Workers?

FLASHBACK: Here’s How the Media Reacted to Biden’s ‘Ballroom Brawl’ Debate Performance with Paul Ryan in 2012

Former Twitter CEO: Line Up and Shoot Non-Woke Business Leaders and He’ll ‘Happily’ Do the Video

Wait. Joe Biden Isn’t Even a Boomer? What Generation Is He Part of?

With A Biased Media, Don’t Give Them An Excuse

US airlines lay off thousands of staff as federal relief ends

Another Migrant Caravan Departs for the United States

‘One and Done’: Speaker Pelosi Says Biden Should Skip The Final Two Debates

Sorry, Joe, You’re Going to Have to Answer The Question About Packing the Courts

They’re all going to be awful. Fact-Checking The Latest Anti-Gun Smear Against ACB

Familiar Faces And 2A Stalwarts Added To SAF, CCRKBA Leadership

What Happens When A Prison Abolitionist Finds An Intruder In Her Bedroom?

MSNBC Panel: To Save Our Democracy, We Need A Bipartisan Commission To “Vet” Presidential Candidates

Big AP Scoop: People Of Praise Scrubbed Its Website Of Barrett References … In 2017

Trump is a pit bull fighting for America: Devine

‘Love her even more!’ Here’s why Dems/media feverishly spreading this leaked audio of Melania Trump COULD backfire on them

I’m taking a cue from the major pro sports leagues and pumping fake crowd noise all through my house.

PJ Media senior columnist and associate editor Stephen Kruiser is a professional stand-up comic, writer, and recovering political activist who edits and writes PJ's Morning Briefing, aka The Greatest Political Newsletter in America. His latest book, Straight Outta Feelings, is a humorous exploration of how the 2016 election made him enjoy politics more than he ever had before. When not being a reclusive writer, Kruiser has had the honor of entertaining U.S. troops all over the world. Follow on: GETTR, MeWe, Gab, Parler,
Read more by Stephen Kruiser
Tags: 2020 PRESIDENTIAL ELECTION DONALD TRUMP COVID-19 AMY CONEY BARRETT