Insanity Wrap #62: Is That a Pipe Bomb in Your Pocket Or Are You Just Happy to Arrest Me?

Insanity Wrap needs to know: What should the New York Times say about COVID-19 that shows Trump was right all along about travel?

No, he didn’t. In fact, his own websites scrubbed any mention of it, and he flat-out denied it existed in recent interviews. He takes no responsibility, and he sees himself as the pandemic’s hero.

This is why Cuomo shouldn’t have interviewed his brother. Entirely inappropriate. https://t.co/2xJWHVhvB8

In a sane world, Chris Cuomo would have been laughed out of any serious work in the public eye long before he had a chance to start providing televised lip service to his own, granny-killing brother.

The Last Word on the Debate (In Picture Form)

While Insanity Wrap tries not to judge, the love between Chris Wallace and Joe Biden ought to be forbidden.

Your Fundamentally Dishonest Media at Work

This @people headline on the tragic story of the young App State student who died of Guillain-Barre (words not even *in their story!) might be the most dishonest headline of all of coronamania. He lived off campus and took only online classes. pic.twitter.com/gAWSsJSMaB

The press knows this and writes the headlines accordingly.

But, hey, anything for a click, even if it does tear at the country’s tattered social fabric.

We Had Been Assured That the Science Was Settled

The World Health Organization said open borders would help fight disease. Experts, and a global treaty, emphatically agreed. But the scientific evidence was never behind them.

The restrictions have humbled powerful nations like the United States, whose citizens are no longer welcome across most of the world. Even so, President Trump has called his travel restrictions “the biggest decision we made so far” and attacked the W.H.O.’s early advice on borders as “disastrous.”

Let’s see if Insanity Wrap understands this correctly: Trump was right all along, but the New York Times still found a way to work in an anti-Trump—and even anti-American—spin anyway.

(A tip of the hat to Bruce Carroll for the link.)

Meanwhile, BLM/Antifa have been throwing all kinds of bombs at law enforcement for over 100 days

If Insanity Wrap is allowed to paraphrase Jeff Foxworthy: If you’re throwing pipe bombs, you might be a leftist.

It is our experience — our indirect experience, thank goodness — that police generally don’t throw pipe bombs.

They carry sidearms and nightsticks and sometimes more.

“Stop, or I’ll throw a pipe bomb in your general direction! Hold still!” is not something one generally hears a police officer say, not even on TV.

So you’ll perhaps forgive us when we say “BS!” to any BLM-antifa bomb-thrower’s claim that they’re getting bombs thrown at them.

Prof calls for all cops to be strangled, complains about doxxing and death threats afterward

A professor who called for every “last cop” to be strangled says he is now dealing with death threats, vandalism and doxxing attempts.

Insanity Wrap will never support threats, vandalism, or doxxing. Not even against people who say they want “the entire world to burn” until a whole bunch of people they don’t like are brutally murdered.

But this bloody-minded philosophy professor needs a lesson of his own.

“Freedom of expression” does not mean, nor does it even imply, freedom from criticism of your stupid expressions.

Trump Is Not a White Supremacist

Of course, the gold standard for this kind of thing was established years ago by Insanity Wrap’s political hero, Ronald Reagan. 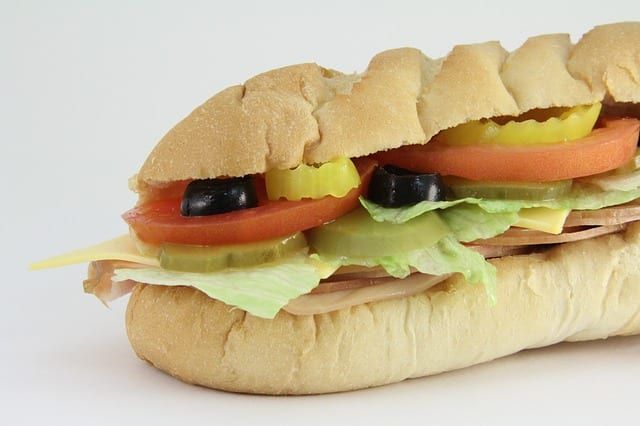 The law butts its nose into everything, eventually:

Under Ireland’s Value-Added Tax Act of 1972 it cannot even be defined as a staple food, according to the Irish Independent, because it contains too much sugar.

The ruling came after an appeal brought before the court by Subway franchisee Bookfinders Ltd. The case rested on whether the bread for Subway’s sandwiches counts as a staple food and therefore is VAT-exempt.

The bread’s sugar content – five times the qualifying limit under the act – means that it falls outside of the legal definition of a staple food. The ruling included white and wholegrain bread. The definition serves to differentiate bread from other baked goods.

Or as Claire Coleman quipped: “Essentially, to summarise, Subway ‘bread’ is actually cake.”

So then a Subway sandwich would be… meatcake.

Now where has Insanity Wrap heard that before?

Previously On Insanity Wrap: Save Us from Another Terrible Debate, Joe Rogan