Insanity Wrap needs to know: Why is it OK for Dianne Feinstein not to wear her mask when she wants to require you to wear one?

Insanity Wrap will explain that after you read this:

As of late Monday, THE CITY had received calls and emails from several voters affected by the apparent screwup in at least five neighborhoods: Sheepshead Bay, Crown Heights, Prospect Heights, Park Slope and DUMBO.

Victoria Edel, of Sheepshead Bay, said she received a return envelope with the name and address of a woman who lives one street away and has a last name that begins with a D.

“This is not my ballot, we have this random lady’s ballot — it’s like they messed this up in a big way,” said Edel, 28.

Much more at the link, none of it good.

Now, about that “the break is in” thing…

We’re convinced that the Left is less concerned about stealing their way to victory in any particular election than they are dedicated to discrediting constitutional order.

Insurrection in various cities, comically inept mail-in balloting, running a senile sockpuppet for president (and maybe even getting him installed)…

…and replace it with something much friendlier to the Left.

The Funniest Thing You Will See All Day

Ryan Long is a national treasure.

In the piece, Donovan blames left-wing riots in America on “right-wing media makers” and “ring-wing reactionaries.”

Left-wingers are violent because right-wingers have video cameras? Did Insanity Wrap get that right?

Well, if true, then what does that say about left-wingers?

Previously On Insanity Wrap: Lockdown Fever Forever, Plus There’s No Escape from L.A.

Aaron LaPointe-Atchison, 33, of Portland: He faces additional charges for trying to escape from police twice during riot https://t.co/iFXmyXWo2A#PortlandRiots #PortlandMugshots pic.twitter.com/bizhcWwvYO

Insanity Wrap posits that if we lose to these guys, it’s our own damn fault.

Insanity Wrap believes there are only two things missing from this video: A cement mixer truck and a driver with a real leadfoot. 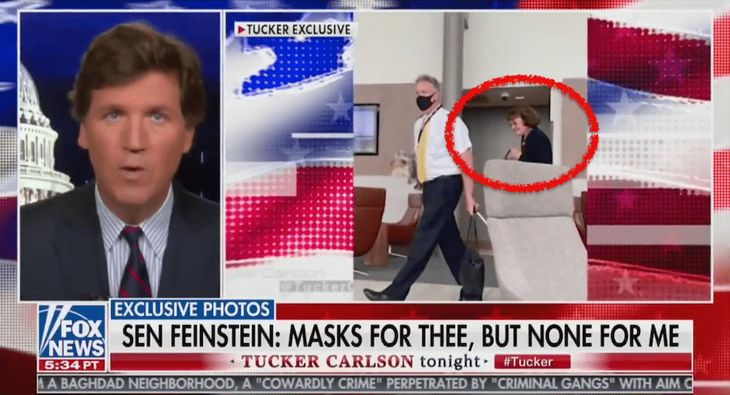 Feinstein without a mask? What madness is this?

Carlson began the segment by showing a news report from June in which a reporter states: “More and more lawmakers are calling for nationwide rule on wearing face coverings. Senator Dianne Feinstein has written to federal agencies asking for a mandatory mask policy both in the air and on public transit.”

“Well, given that, today, this show exclusively obtained photographs of — and this going to rock your world — Dianne Feinstein in a private terminal at Dulles airport, an FBO as they say in private aviation, on Friday,” Carlson said. “In the photographs, Feinstein can be seen smiling without a mask on.”

A simple misunderstanding. Feinstein was in a private terminal where she could reasonably expect not to be seen by the likes of you, comrade.

Insanity Wrap dearly hopes you’ll be able to forgive yourself for the indiscretion.

call me an idealist, but i think it’s possible for society to draw a line between destigmatizing tattoos in the workplace and recognizing if you look like something straight out of pan’s labyrinth you’re going to make the five year olds cry https://t.co/eicUyy4UkX

We don’t mean to be presumptuous, but we must ask how he got hired in the first place.

Insanity Wrap is reasonably sure that all that ink didn’t just materialize one morning before kindergarten.

Not one, not even when she accepted the job.

Maybe headlines like this one are why: “Kamala Harris Mistakenly Refers To Late Justice Ruth Bader Ginsburg As ‘Notorious BIG’.”

There's nothing better than BBQ—except for winning this Senate seat, of course. pic.twitter.com/oEsDXIZ5O2

Insanity Wrap refuses to be concerned about anything Cal Cunningham has to say about barbecue.

Number one, he’s using a gas grill. Number two, it isn’t lit. Number three, those buns appear to have been toasted in an oven. Number four, dogs and burgers are NOT BBQ, they’re grilled. Number five…

Just never vote for anyone who lies and panders with so little skill.

Come back to the PJ Media homepage tonight at about 8:45pm Eastern/5:45pm Pacific for the Official VodkaPundit Debate Drunkblog.

Win or lose, it’s going to be more fun than one liver can handle. 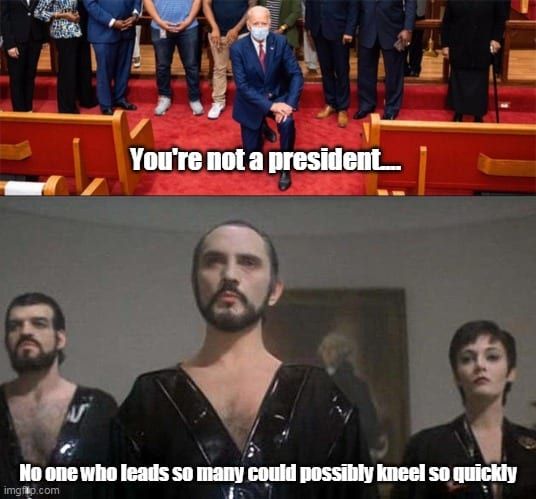