Answer: Our fact-checkers rate this as COMPLETELY 100% FACTUALLY TRUE.

This really happened. Not only did USA Today fact-check a Babylon Bee story, but they fact-checked this one:

It’s one thing when the Infotainment Industry — formerly known as the Complicit Media, before that known as the Democrat-Media Complex, and prior to that the Mainstream Media — fact-checks one of those Babylon Bee stories that hits so close to our crazy reality that people think maybe it’s real, and pass it around on Facebook as such.

That kind of fact-checking is still useless and stupid, but at least you can ascertain a sort-of dimwitted logic to it.

But USA Today’s Chelsey Cox chose to fact-check a Bee story in which they claimed that the 9th Circuit Court overturned Ruth Bader Ginsburg’s death.

Her death. Overturned. By court order.

Insanity Wrap is forced to presume that Ms. Cox is 27 years old and knows literally nothing.

To be fair, she certainly knows how to fill a completely useless column with 1,120 oh-so-earnest words — including no fewer than 12 “fact-check sources” — to dispute the claim that RBG had her death overturned.

We rate this claim SATIRE, based on our research. A satirical article about the 9th Circuit “overturning” Supreme Court Justice Ruth Bader Ginsburg’s death has no basis in fact.

We also loved this bit: “Our fact check work is supported in part by a grant from Facebook.”

File that away for the next time Facebook makes you take down something factual.

Insanity Wrap wants to say this one last time: USA Today felt it necessary to publish an extra-long column full of cites explaining to people that Ruth Bader Ginsburg is still dead.

Ian Miles Chong reports that “Police have charged the driver who ran over two Trump supporters in the Yorba Linda counter-protest with assault with a deadly weapon and attempted murder.”

The 40-year-old Tatiana Turner made news on Saturday, September 26, when she drove her car into the crowd of Trump supporters, injuring two people. Federal records show that Turner filed a trademark application for Caravan4Justice in July and a GoFundMe campaign names her as the group’s “founder”. Police confirmed that Turner is believed to be a member of the Caravan4Justice.

In today’s crazy world, “justice” means caravaning your car through people you disagree with.

Previously On Insanity Wrap: Donald Trump Is Literally Hitler™ (Not)

The Stupidest Person in the World (Today)

Who leaked Trump’s tax returns to The New York Times?

If true—there should be felony charges leveled.

RT if DOJ should immediately investigate the Times and their sources!

Gentle reader, Insanity Wrap has some shocking news for you: Don Lemon might not in fact be the stupidest CNN host.

Today, at least, that honor goes to Brian Stelter for this tweet: 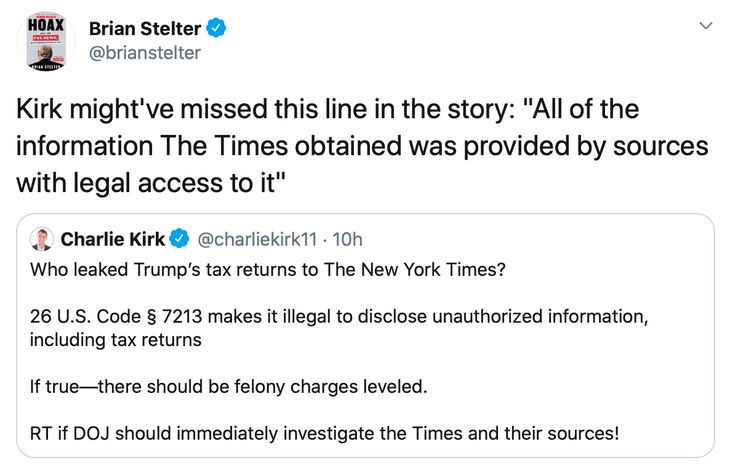 We can’t even count how many ways this is wrong, but you can bet that if someone had legal access to Brian Stelter’s Google Image Search history (Safe Search: OFF), he’d push for the death penalty for them if they leaked it.

More than that, Stelter reveals either just how stupid he is, or just how much he must rely on his audience being stupid.

Insanity Wrap realizes now would be a good time to embrace the healing power of “and.”

We’ve got more on the “ERMAGERD TRUMP’S TAXES!” story here, but in the meantime, the last word on Brian Stelter goes to PJ Media’s own Stacey Lennox.

How About One Small Measure of Sanity?

A 52 year old proud black American calls out the BLM movement and their activists. He criticizes the systemic racism and oppression narrative. pic.twitter.com/ebV8F4M7M8

Who is this guy, when will he run for office, and where can we send him money?

Kirsten Gillibrand, who is allegedly an elected representative of the people of New York State with a seat in the United States Senate and not actually a spoiled eight-year-old-girl, says she “will not participate in the degradation of our democracy or our judiciary, or in confirming a judge so clearly unfit for the Supreme Court.”

Insanity Wrap posts this for only two reasons.

One, in case you’d forgotten just how deeply weird Portland is even when they aren’t throwing nightly riots.

It is Insanity Wrap’s earnest hope that someone will bring this to the attention of the (Soon-to-Be) Supreme Amy Coney Barrett.

Previously On Insanity Wrap: Lockdown Fever Forever, Plus There’s No Escape from L.A.