Seriously? Moderator of Second Presidential Debate Served as an Intern for Joe Biden

C-SPAN’s Steve Scully, who will moderate the second presidential debate, got his start as a staff assistant in Sen. Ted Kennedy’s communication office, and prior to that worked as in intern in the office of then-senator Joe Biden.

The second presidential debate is scheduled for October 15, just two weeks from now.

Scully’s complete work and education records — both impressive — can be found here on his page at George Washington University’s School of Media and Public Affairs.

You might know Scully as the guy who handles C-SPAN’s open phone lines, a job he handles affably and with grace.

Scully is generally well-regarded in Washington and in the media, but out here where I am in flyover country, he may at least be seen as too chummy with Democrats to serve as an honest broker for the second presidential debate.

Tweets like this one from 2016, and currently making the retweet rounds, don’t help. 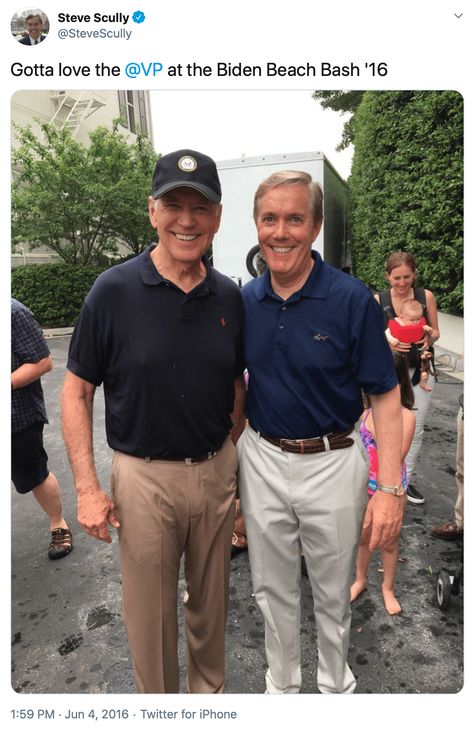 Whatever else you might say — and I nearly bit right through my tongue — that is not a good look for the supposedly non-partisan moderator of a presidential debate.

Even people on the Right who like and respect Scully have questions about the moderators generally, such as this one from conservative Washington lawyer (yes, that’s a thing) and frequent Fox News guest Victoria Toensing:

Could someone tell me which of 4 debate moderators is a conservative? Wallace-registered Democrat; Susan Page-anti @realDonaldTrump ; Steve Scully- worked for Dems; Kristen Welker-MSNBC. Need I say more? #MAGA2020

The first debate held Tuesday night was moderated by suspected NeverTrumper Chris Wallace of Fox News, who has been roundly criticized on the Right for bias, and even by some on the Left for his inability to run a decent event.

Even on the Left some are less than certain that Scully will be able to perform any better than Wallace did.

NPR’s David Folkenflik tweeted on Tuesday while the first debate — AKA, the train wreck scene from The Fugitive — was still ongoing:

The most decent man in DC, Steve Scully of C-SPAN, is next presidential debate moderator

How the hell is *that* going to work?

So the moderator of the next debate is CSPAN's Steve Scully. He seems like an earnest, honest, fair-minded, & mild-mannered gentleman – chill, even by CSPAN standards. So pardon me for asking, after tonight:

How on Earth is *he* going to successfully moderate the next debate?

Steve Scully getting ready to moderate the next debate after watching what happened last night pic.twitter.com/G0rtrZ1DoS

Is that a narrative I smell brewing?

Forget the Second Presidential Debate, Here’s How the Media Reacted to Biden’s ‘Ballroom Brawl’ Debate Performance with Paul Ryan in 2012

However fair and balanced Scully might try to act as the moderator for the second presidential debate, his decades both covering and being a part of the massive Government-Media Complex certainly shapes his perspectives and assumptions.

As my friend and colleague Stephen Kruiser noted in Thursday’s Morning Briefing:

As I have written many times, my issue with these political Kabuki theater “debates” is that the questioning is all framed around Democrat talking points. You’ll hear a lot of “Why don’t you believe in climate change?” crap but never anything like “How can you be a Catholic and support infanticide?” That would be a tough question. The kind a real journalist would ask. Sadly, real journalists have gone the way of the dinosaurs.

Like Caesar’s wife, the moderator of a presidential debate should be above even the appearance of impropriety.

Whatever his virtues as a person and a journalist, Scully’s history of working for elected Democrats and his apparent chumminess with the former vice president by themselves give the appearance of impropriety.

Moving further forward, NBC’s Kristen Welker is set to moderate the third and final presidential debate on October 22, just less than two weeks before Election Day. Welker is an official White House correspondent, making her a part of what might just be the most anti-Trump cabal in the country.

Can’t we do better than this as a serious country? As a serious political party, why do Republicans keep agreeing to sit down in front of moderators who, at the very best, appear unsuitable?

Being blessed with a dark, mean-spirited heart filled with sadistic desires for our political and pundit classes, may I make a modest proposal for all future presidential debates?

There will be two moderators, each moderator chosen by one of the nominees.

The kink is, each nominee would pick the moderator for the other guy.

If one of the candidates balks, the remaining candidate gets the full 90 minutes of TV debate time, taking questions from a moderator of his own choice.

See? We can do better.