The Morning Briefing: Not Coming to a Town Near You—Joe Biden's Invisible Presidential Campaign

If this were a normal election year, we would be heading into convention prime time for both major parties and gearing up for the candidates to hit the campaign trail in earnest until election day. But it’s not normal. The year has already been a decade long and it’s only July.

The conventions are going to be sparsely attended, mostly online affairs and who knows what a COVID campaign trail will look like after that. One thing is almost certain: you won’t be seeing much of Joe Biden on it.

We’ve all been joking that Biden has been campaigning from his basement since the plague hit, but no one has really proven the joke wrong so far. For all we know, Dr. Jill has him duct-taped to a recliner and only lets him go when it’s time for another one of his now-trademark disastrous virtual campaign events.

Stacey wrote a couple of days ago that Biden was going to have to eventually leave the basement and prove to the American public that he isn’t the drooling fool that so many of us now believe him to be.

As we have discussed here many times, Crazy Joe the Wonder Veep has benefited greatly from the Coronapocalypse excuse to avoid the campaign trail. He can’t spend 3 minutes on camera reading a teleprompter without barking nonsense. He may not even be able to speak English if he’s off-leash at a campaign event. It’s a given that his handlers want to keep him away from public campaigning for as long as possible.

Because conspiracy theories all have some validity now (I’m even questioning the moon landing since the plague hit), it’s not a stretch to believe that the Biden campaign brain trust hopes that the COVID news gets worse to provide them with an excuse to keep Gropey Joe in the basement. I’ve been saying that for over a month and I’m not alone. Many believe that some sort of COVID-related crisis will be manufactured by Team Biden right before the first scheduled debate. If he does happen to be on the campaign trail at the time, the “crisis” will be used as an excuse to whisk him away to the basement again.

Presidential campaigns are physically difficult for even the healthiest of people. By the end of the 2016 campaign, Granny Maojackets was so tired she was slurring even when she hadn’t been hitting her breakfast box of Franzia. Lately Biden looks as if he has aged 20 years just since he hit the basement in March.

In contrast to the Biden Basement Campaign strategy, it’s obvious that President Trump is itchy to hit the campaign trail. Then again, Trump is the young’un in this race. One would presume that some campaigning would have to happen before the election. It feels that Team Biden will have to be forced into it, as they have no interest in getting their train wreck in front of the public.

I wrote in a Briefing last month that President Trump needs to goad Biden to get out and campaign in public. It’s a win/win for the president because Biden looks bad either way. If he is reluctant, he appears weak and afraid. If Biden takes the bait, he’ll be on a stage somewhere talking about the invisible chihuahua in his pants that he speaks French with while eating Cocoa Puffs out of the box.

That’s if he’s having a coherent day.

Never Ask What Else Can Go Wrong

After the mountains here were on fire for a month the rains came and washed this down from them. THIS YEAR.

Who had this on their 2020 hellscape bingo card? pic.twitter.com/fUNvIVS7aw

COVID IS Killing the 747 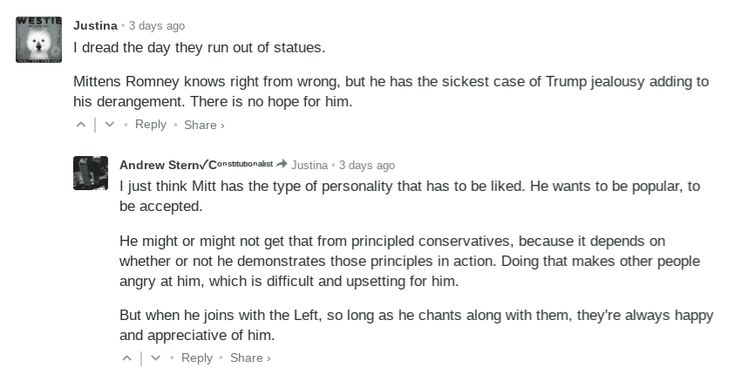 Did Trump Shame Portland’s Mayor Into Putting Down the Autonomous Zone? Sure Looks That Way…

We have come for your children. De Blasio to Replace NYC Schools with ‘Public Childcare Program’

Because America and stuff. Missouri’s Republican Governor Backs the McCloskeys’ Right to Defend Themselves

My favorite of Georgia’s two governors. Governor Kemp Is Trending Again for Absolutely No Reason

Green Activists Fuel China’s Dominance in a Sector Critical to the U.S. Economy and Green Energy

#TrueStory. Americans Are Not Racist, But Race Activists Are

Look at the Evidence: Democrat Lawmakers Pick the Targets for Antifa and BLM Rioters

VDH: The NFL Is On The Brink

Me: Mary Trump Is the MSM’s New ‘Avenatti’

Jack Dake Didn’t Die from COVID, But the Government Says He Did

She should come up with a better nickname for her husband. WATCH: Elizabeth Warren Says Her Dog Will Vote for Biden

‘The Suburb Destruction Will End With Us’: Trump Vows to Make Sweeping Cuts to Federal Regulations

Yeah, That’s Why WaPo Ran a Chinese Propaganda Piece About Wuhan Native Who Got COVID in Florida

Walmart, Kroger Weigh In On National Debate: Here Is How Your Next Shopping Trip Will Be Different

CHAZ/CHOP Cases Still Being Prosecuted: Attempted Arson At A Police Precinct And The Shooting Of A Protester

Vice: The Worst Part Of The Twitter Hack Is That It Feeds Conservatives’ “Conspiracy Theories” On Shadowbanning

NY Times: What Lies Beneath Anti-Racism Training Is An Attack On Capitalism, Rationalism And Excellence

Get me a tranq dart. Media uncovers the systemic racism in classical music, opera, and Los Angeles improv comedy

WHIIIIIIIIITE PRIVILEGE. After backlash, the Smithsonian removes that chart breaking down ‘whiteness and white culture’ in the US

THUD! Rob Reiner trips hard over Planned Parenthood in rush to say Trump is ‘actively trying to kill our children’

‘Does it taste like chicken?’ James Woods is just RELENTLESS mocking a very whiny and privileged Chrissy Teigen

A fave of mine. Thanks to @BonzoDeep on Twitter for sending me the link.

Let’s throw on some chaps and spurs and ride this year on outta here.

PJ Media senior columnist and associate editor Stephen Kruiser is a professional stand-up comic, writer, and recovering political activist who edits and writes PJ's Morning Briefing, aka The Greatest Political Newsletter in America. His latest book, Straight Outta Feelings, is a humorous exploration of how the 2016 election made him enjoy politics more than he ever had before. When not being a reclusive writer, Kruiser has had the honor of entertaining U.S. troops all over the world. Follow on: GETTR, MeWe, Gab, Parler,
Read more by Stephen Kruiser
Tags: 2020 PRESIDENTIAL ELECTION DONALD TRUMP JOE BIDEN
SHOW COMMENTS