The Morning Briefing: It's Time for Trump to Really Start Going After Biden

The above is a quote from my friend and colleague Stephen Green. During our weekly VIP Gold Live Chat, Stephen, Bryan Preston, and I were discussing our predictions for the election. Mr. Green still thinks that Trump will win, Mr. Preston and I are a more pessimistic. We got into a rather lengthy examination of what the president needs to do to shake things up and win.

We all agreed that Trump has been too tepid lately and not using the instincts that blew up the political world in 2016.

We are all aware that Joe Biden has benefited greatly from his pandemic-induced basement quarantine. He’s such a train wreck that his handlers are no doubt working overtime to come up with excuses to keep him away from the campaign trail and — more importantly — from sharing a debate stage with President Trump.

The three of us agreed that President Trump needs to seize the initiative now and start goading Biden to get back in the public eye and into a debate. One of Trump’s greatest gifts is the thing that drives old guard Republicans crazy — his ability to drive a narrative on social media. Now is the time for him to use that bully pulpit and relentlessly bait Biden and force his hand. 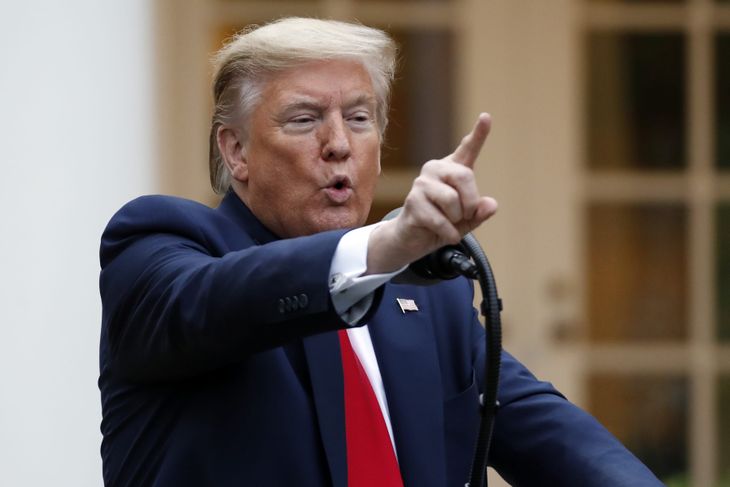 Biden can’t win a Twitter throwdown with Trump. His handlers are tweeting for him and they are not the most inventive lot. His Twitter feed reads like something that came from a book titled “Democrat-y Stuff Candidates Should Say.” It would be very easy for the president to make Crazy Joe the Wonder Veep look awful all day, every day. The end game is to get Biden back in public, of course, but there is an immediate return on investment in a Twitter flame war.

The polls are dismal at the moment and we all know that they can’t be trusted, but it still may serve Trump well to go at Biden as if they were true. The constant drumbeat of news about Biden having a double-digit lead could end up having an impact on undecided voters in flyover country. They can’t be left dangling, especially while the Democrats are still deliberately trying to tank the economy.

Make Joe go live, Mr. President, and let everybody see that Crazy Joe shouldn’t be allowed to be in charge of anything,

Yesterday’s truncated Briefing was the result of a technical glitch that occurred before I could finish. I tried to wait it out but that didn’t work. I’ll make up for it with extra snark next week.

The Warlord Will See You Now. Armed Rebels Illegally Require ID to Get Into Seattle ‘Autonomous’ Zone

Trump Demands Seattle Mayor, WA Gov ‘Take Back Your City’ from CHAZ. Their Reaction Shows How Screwed Their People Are.

VodkaPundit: ‘I Take Responsibility’ Celebrities PSA Is the Most Unintentionally Funny Thing Ever

Trump and Congress At Odds Over Bases Named for Southern Soldiers

Serious Question: Do New York Times Reporters Think Most Americans are Worse Than the Taliban?

CrossFit Founder Forced to Retire After Mob Judges Him Insufficiently Woke. Could You Be Next?

Black Lives Matter Is a Slogan and an Organization, So Be Careful What You Endorse

Biden: ‘This President Is Going to Try to Steal This Election’

She Spent Years Building Her Business. Looters Cleaned It Out in Minutes. Now She’s Working to Rebuild.

7 Films the Woke Mob Will Be After Next

NYC First Lady Chirlane McCray on Abolishing Police: ‘That Would Be Like a Nirvana’

Did You Catch What CNN Missed as They Return to Their Coronavirus Panic Coverage?

Insane: Here Are the ‘Demands’ of Seattle’s ‘Autonomous Zone’ Anarchists

Charles Barkley Weighs in on the ‘Defund the Police’ Furor

‘I Have Not Received Any Calls:’ Abrams Brings VP Prospects Into Question

Surprise, Surprise: The Charge to Defund Police is Loaded With Hypocrisy

This Takes Some Nerve: House Dems File an Amicus Brief In the Flynn Case Against Dismissal, Claim ‘Partisanship’

FRAUD: FBI Knew of Key Information About the Steele Dossier Earlier than Thought

Gov. Inslee Calls Anarchists Who Seized Part of Seattle And Chased Cops Out ‘Largely Peaceful,’ He And Mayor Attack Trump Instead

NBA: Let’s Lock Reporters Up At Disney World For The Season

Rubio To Zoom: Explain Your Interventions Against China’s Critics — Here In The US

Now We’re Supposed To Pull The Police Out Of Schools?

PJ Media senior columnist and associate editor Stephen Kruiser is a professional stand-up comic, writer, and recovering political activist who edits and writes PJ's Morning Briefing, aka The Greatest Political Newsletter in America. His latest book, Straight Outta Feelings, is a humorous exploration of how the 2016 election made him enjoy politics more than he ever had before. When not being a reclusive writer, Kruiser has had the honor of entertaining U.S. troops all over the world. Follow on: Gab, Parler, MeWe
Read more by Stephen Kruiser
SHOW COMMENTS