Just hours after the Seattle Police Union accused that city’s leaders of losing “all the political will to enforce the rule of law,” the police chief has had her say. It may be too late.

It’s not clear that Chief Carmen Best’s words on Thursday will do much to quell the anger the cops are feeling about being ordered by the chief to abandon the East Seattle Police Precinct on Monday. This was after two weeks of holding the line and being attacked by protesters.

They abandoned the building, allowing the violent protesters who’d been amassing there for days to take over the area surrounding it. 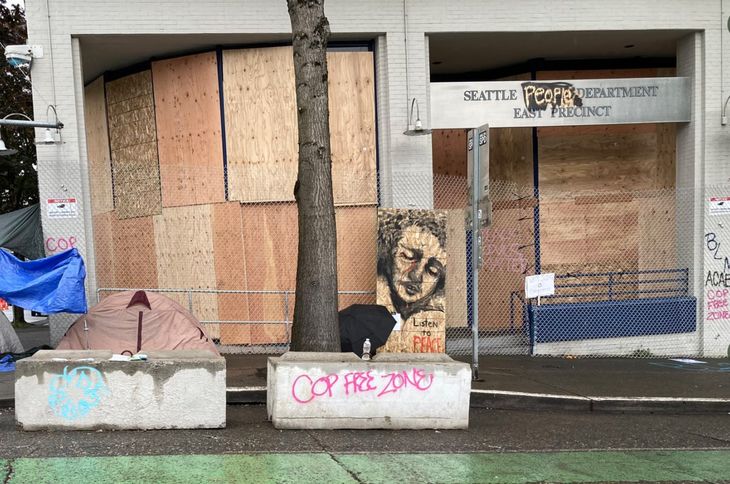 The subsequent village that has sprung up around it has taken on a “Lord of the Flies” air, with warlords, food theft, illegal ID requirements, and a protection and extortion racket. They’ve dubbed the area the “Capitol Hill Autonomous Zone” (CHAZ), though it approximates a post-apocalyptic dystopia, albeit with really great coffee.

No cops are allowed. Armed protesters patrol the encampment.

The chief said nothing at the time, but claims now she didn’t agree with the decision to hand over the precinct to the mob.

Chief Best released a video (below) to her officers in which she said they were “family” in one of “the toughest times ever” in the history of the Seattle Police Department. She claimed that she was “angry” about it and didn’t care if anyone knows it – even Mayor Jenny Durkan, from whom the order came.

…[L]eaving the precinct was not my decision. You fought for days to protect it.

I asked you to stand on that line day in and day out, to be pelted with projectiles, to be screamed at, threatened, and in some case, hurt. Then to have a change of course nearly two weeks in – it seems like an insult to you and our community.

Ultimately, the City had other plans for the building and relented to severe public pressure.  I’m angry about how this all came about.

I understand that my comments and this message may be leaked to the public, but I’m not concerned about that. I stand by what I’m saying.

We had solid information to believe that anti-government groups would destroy the precinct once we left through vandalism or arson.

The East Precinct is still standing, but it looks nothing like it looked before, as our colleague Julio Rosas at Townhall shows below.

I’m outside of the Seattle Police Department’s East Precinct for @townhallcom. Police have pulled out of the area and protesters have set up barricades in the streets. They have declared it a “Cop Free Zone.” pic.twitter.com/iYFQ9B4jhz

When’s Next Seattle Precinct Take Over?

For his part, Michael Solan, president of the Seattle Police Officers Guild, posits the very real possibility that this could happen again.

Now look what happened. We lost a precinct, now, what’s next? Are we going to lose another precinct? The city council has removed our ability to have less lethal ammunition for us to properly protect those facilities and protect ourselves. So what’s left? How are we supposed to defend the rest of those precincts? What about the community’s voice?”

What Chief Best could have done was quit her job to register her objection, if that’s what it took to get Mayor Jenny Durkan’s attention. But she didn’t do that.

The cops were told to stand down and the precinct was left to the ravages of the mob. Could a word from the female African-American female chief have toned things down? We’ll never know.

Seattlites have the right to ask: if their chief will not stand against the mob, who will? If the police chief, of all people, won’t stand up for the rule of law, who will enforce it?

Chief Best might have been Seattle’s last best hope and she blew her chance to make a difference.

Trump Demands Seattle Mayor, WA Gov ‘Take Back Your City’ from CHAZ. Their Reaction Shows How Screwed Their People Are.

Victoria Taft is an award-winning journalist, writer and terrestrial radio talk host, heard in Seattle and on the rest of the Left Coast. Listen to her twice weekly  “Adult in the Room Podcast.” Find her at VictoriaTaft.com  Parler, MeWe, Minds, Locals, Twitter & Facebook. Her book mocking antifa will be out this year. For media inquiries write: [email protected]
Read more by Victoria Taft
Tags: POLICE GEORGE FLOYD SEATTLE
SHOW COMMENTS