Among other things, the training materials attribute opposition to reparations or affirmative action to a form of racism, claim the idea that “human similarities are more important than differences” is a form of “ethnocentrism,” warn against “sexual orientation privilege” and “religious privilege,” and claim that those who raise religious objections to same-sex marriage are engaging in discrimination.

“These documents show that the Department of Defense has been indoctrinating our troops with anti-American and racially inflammatory ‘training,'” Judicial Watch President Tom Fitton said in a statement. “We must protect our military servicemembers from being brainwashed by the divisive, anti-American propaganda fueling the leftist insurrectionists who are right now trying to destroy our country.”

In a chart on “Racist Behavior” from an April 2015 training on racism, DEOMI laid out four models of racism. The chart includes a wide range of attitudes that are not racist at all. It defines “traditional” racism as the belief in “biological superiority,” that minorities are “innately inferior,” and that discrimination is “justifiable and desirable.” Yet other forms of “racism” are so subtle to … not be racism at all.

For instance, “symbolic” racism (circa 1965) includes the ideology that “individual effort is key to success,” preaches that minorities “could succeed if [they] worked harder,” and ignores “systematic barriers to advancement.” “Modern” racism (circa 1978) teaches that “people get what they deserve,” that minorities are “undeserving of special efforts to redress past inequities” (like reparations or affirmative action), and that discrimination is “a thing of the past.”

Finally, “aversive” racism (circa 1986-Today) teaches that “all people should have equal political, social, & economic rights,” views minorities as “victims of past injustices,” and supports “non-discriminatory practices,” but according to the chart, this is still racism and results in “avoidance, interracial anxiety, unintentional discrimination.” 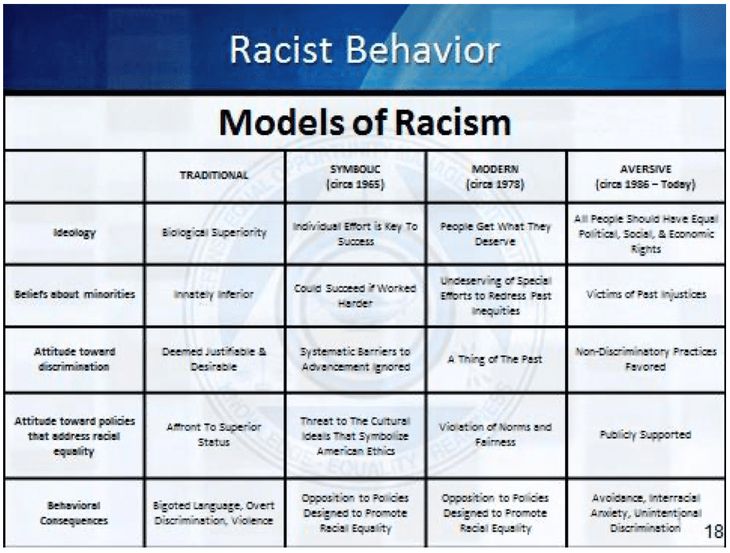 Not only does this document brand attitudes of self-sufficiency and political stances against affirmative action or reparations a form of “racism,” but it also claims that modern leftist approaches to rooting out racism are themselves racist.

In a chapter on “individual diversity,” the January 2015 guide claims that in the process of embracing people from other cultures, people often operate in one of six phases of two main stages (“ethnocentric” and “ethnorelative”). The “ethnocentric” stage includes a “minimization” phase: “Individuals in this level recognize cultural differences, but trivialize them. Individuals at this level believe that human similarities are more important than differences.”

In other words, the attitude that human beings have more that unites us than separates us is just an incomplete and “ethnocentric” approach to cultural and racial diversity.

A document on “Power and Privilege” from April 2015 delineates various forms of privilege, including “Sexual orientation privilege,” which “is associated with the marginalization of non-heterosexual lifestyles and the view that heterosexuality is the normal sexual orientation.” This marginalization includes “the idea that people fall into two distinct and complementary categories (male and female), that sexual and marital relations are normal only when between people of different sexes, and that each sex has certain natural roles in life.”

While the document notes that Obama signed an executive order banning federal contractors from discriminating against employees on the basis of sexual orientation or gender identity in 2014, it claims that “perceived privileges associated with sexual orientation are evident in today’s society.”

Although it is true that societal acceptance and celebration of same-sex sexual activity varies widely in America today, the notion of attributing the historical-cultural preference for heterosexual marriage and sexual activity to a “privilege” belittles the biological truth that only male and female unions are capable of producing offspring. The “heteronormative” culture is rooted in more than just prejudice.

The “Power and Privilege” document also condemns the religious objections to same-sex marriage. In a section on defenses for discrimination, the document describes “Principium” as a defense “identified by behaviors where one is avoiding exploration based on a religious or personal principle.”

A person using this philosophy might state, “I find it upsetting and disheartening that homosexuals, or anyone for that matter, would have to bear such injustices. However, I do not believe that it is an injustice or discriminatory act to not allow homosexuals couples to cross the threshold of qualifications to be married.”

Ironically, the document that so demonizes religious objections to same-sex marriage also references “religious privilege.” While Christians do enjoy some ease when it comes to getting holidays off, conservative Christians, Jews, and Muslims are finding their traditional sexual morality routinely demonized in the public square.

According to DEOMI’s website, the organization was “Propelled by the civil rights movement of the 1960s.” The DEOMI, a joint-services school, had an operating budget of $19.66 million between 2012-2017, the Judicial Watch documents reveal. According to the DOD comptroller’s office, DEOMI and the Workforce Recruitment Program (WRP) now jointly make up an entity called the Defense Management Operations Center (DMOC) and that entity has a $13,366,000 budget for fiscal year 2020.

It remains unclear if the DOD continues to use these teaching materials from the Obama administration. However, the July 2020 Navy HR newsletter Sailor Sailor encourages its audience to “take a hard look at how we are all affected by implicit bias and systemic racism.”

Official U.S. government training materials should not endorse a radical view of systemic racism that redefines American society to claim that it is fundamentally systemically racist. This kind of radical Marxist approach threatens to erode the patriotism of America’s armed forces and it misuses Americans’ taxpayer dollars, to boot.

Liberal Student Rejects Science Because it Discriminates Against Witchcraft