Governor Kemp Is Trending Again for Absolutely No Reason

The Politics of COVID-19

The media’s obsession with red state governors and their response to COVID-19 is painfully apparent. Especially in Georgia, where Governor Kemp was one of the first-movers to reopen the economy during the COVID-19 pandemic. Georgians were going to be dropping dead en masse according to the media. Also-ran Stacey Abrams and the execrable Atlanta Mayor Keisha Lance Bottoms went all over television to call Kemp irresponsible.

Of course, both women were rumored to be on the list of women Joe Biden was considering for vice president, so this type of virtue signaling was required. The problem was, the apocalypse never came. Even the Associated Press had to admit that before June, infections were declining. That was six weeks of steady-state or three to six times the incubation period of the virus. Georgians were responsible due to the eased restrictions.

Kemp was among the first governors to ease earlier restrictions, and while infections declined for weeks afterwards, they began to rise in June.

The Truth About Riots

To be specific, the first significant jump in Georgia’s case rate began on June 15th, with an increase of 135% in one day. Oddly, that is just about two weeks after mass protests began in Atlanta following the death of George Floyd. I am almost sure the public health community told us this was a social justice virus that could differentiate between the righteous rioters and looters and everyone else. I guess this was just another time they were wrong.

For the week following June 15th, the seven-day moving average of new cases increased by 55%. A similar pattern emerges following the June 12th death of Rayshard Brooks, when mass protests were reinvigorated and proceeded unabated. And gee, look where the most significant number of cases are—Fulton county, which contains Atlanta and the surrounding counties. Forgive me if I am not shocked. 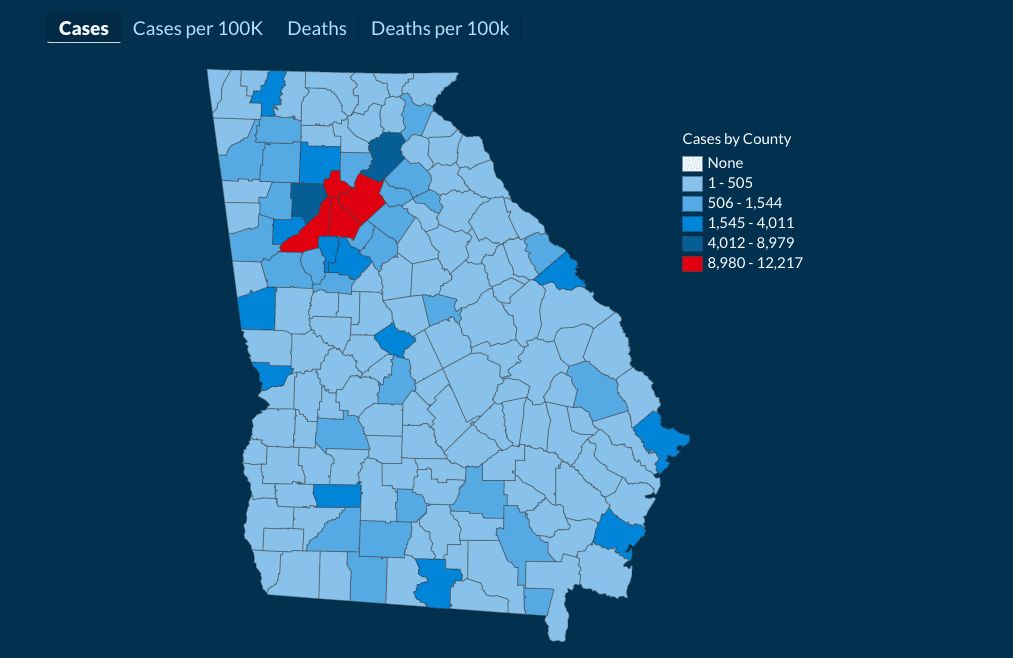 With the rising case rates, several cities have implemented public masking orders with fines and other penalties. Governor Kemp has now quashed those orders and is encouraging voluntary masking.

Our governor has committed the great sin of trusting adults to take personal responsibility and make decisions when provided with information. The horror! He is also not going to subject residents to abusive fines imposed by local governments over a public health recommendation. Savannah was going to charge businesses $500 for not enforcing the order, making shopowners their brother’s keeper. Ridiculous.

In fact, Kemp has gone on a statewide tour to encourage the responsible use of masks and models the behavior himself. His official and personal Twitter feeds are full of this encouragement. He even toured the state with the Surgeon General to encourage best practices.

Honored to have Surgeon General Dr. @JeromeAdamsMD travel with us today as we urge Georgians to do their part to stop the spread of COVID-19 in Georgia. #gapol https://t.co/Y0OIlNGK67

There’s a lot of focus on non compliance, but I prefer recognizing good actors/ behaviors. @WanderNorthGA – a family owned hiking store in Clayton, GA- offers a 5% discount to those who wear their mask into the store. Kudos to you, Wander! Please share other good 😷 stories! pic.twitter.com/MWmenMYBEz 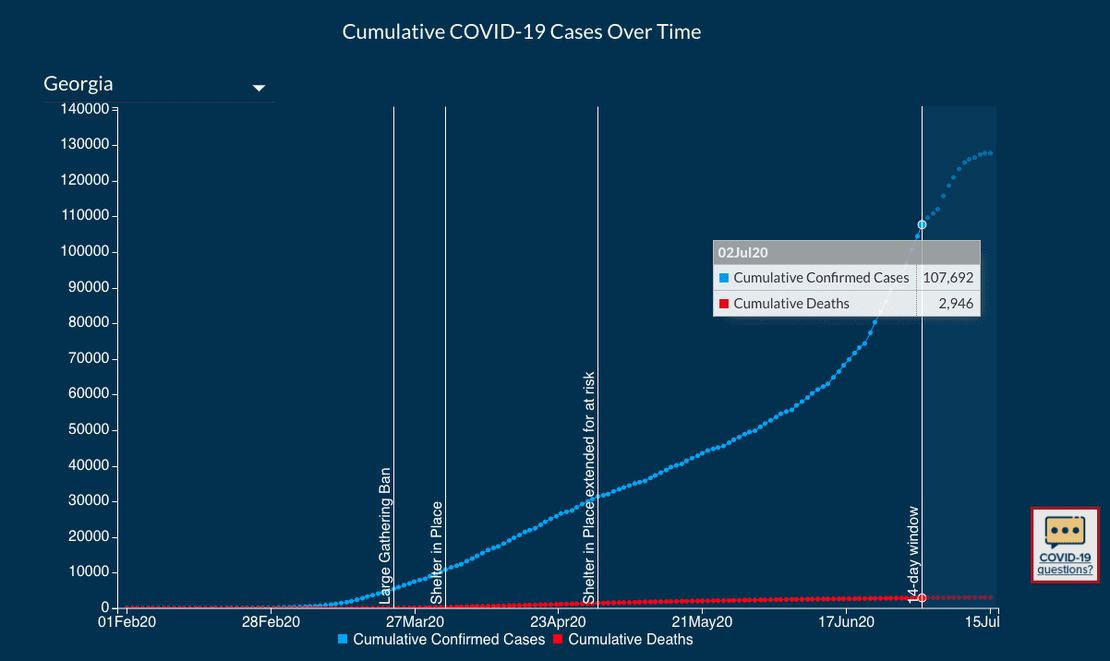 Compared to California, which appears to be about two weeks behind Georgia on the curve and has had severe restrictions and mandatory masking through the state, the difference is minimal. Their cases have increased 47.2% over a 14-day rolling average as of yesterday, much as ours did mid-June. The trend towards many more people under 50 testing positive is similar in both states.

Their current CFR and IFR are 2% and 0.2%, respectively. California’s cases also began a steep rise on June 15th, which is continuing now. They may end up with a slightly flatter curve, but the area under it will be mostly the same. As the experiences in New York and that of several nations established, the vast majority of hospitalizations came from the home.

I, for one, do not believe seven-hundredths of a percent in estimated IFR is worth the economic and mental health destruction that California’s continued shutdowns and severe restrictions of personal liberty will cause. Navigating COVID-19 is a series of trade-offs that need to consider short and long term consequences. Governor Kemp has done an excellent job balancing these considerations.

In conjunction with the voiding of mandatory mask orders, Kemp renewed the ban on gatherings larger than 50, business restrictions and protections for the elderly. He and his team are also working on activating hospital surge space in case it is needed.

Since the media already hates him, I would advise Governor Kemp to do one more thing. Get a team of top doctors together and have them review the global studies and results on the use of the hydroxychloroquine combination. Then encourage doctors to give it early and outpatient in presumed cases of COVID-19. It will lower the state’s hospitalization rate within just a few weeks and reduce the CFR and IFR as we continue along the curve.

Having Kemp be the first mover in the aggressive, inexpensive, and effective outpatient treatment of COVID-19 against all of the corporate media’s advice would be the best way to ride out the pandemic.