President Trump provided the nation a perfect social media snapshot of why so many of us are way beyond being able to see the American Left as anything but a bunch for raving lunatics. Yeah, I may be a little over the top now, but I think I’ve been drowned in so much hyperbole and anti-Trump hysteria AMID THE PANDEMIC that I now feel like responding in kind.

It began when Trump gave a speech from the Rose Garden addressing the violence of the past few days that expressed some sentiments that are difficult to find fault with:

“All Americans were rightly sickened and revolted by the brutal death of George Floyd,” Trump said, adding that “For George and his family, justice will be served. He will not have died in vain. But we cannot allow the righteous cries of peaceful protesters to be drowned out by an angry mob.

“The biggest victims of the rioting are the peace-loving citizens in our poorest communities. And as their president, I will fight to keep them safe.

“I will fight to protect you. I am your president of law and order and an ally of all peaceful protesters,” Trump said.

Trump then pointed out what has been plain for all to see: there has been a complete failure of leadership in every city where the violence has gotten out of hand. He was polite and didn’t mention that they were all Democrats running those cities.

We all know the drill well by now: the liberals are going to complain no matter what Trump does. Prior to the speech, they were complaining that he was hiding. Then they bitched about the speech. Then they really lost it over what he did next. Victoria covered it here:

And then he walked off and lead a group of government officials, including Attorney General Bill Barr and Defense Secretary Mark Esper and walked to St. John’s Episcopal Church across from the White House. The White House press corps was not aware of the plan.

The desecration of St. John’s church by an angry mob was an act of cowardice. President Trump standing before it and holding a Bible is an act of courageous leadership. Let’s honor #GeorgeFloyd by peacefully standing up against injustice and loving one another as God loves us. https://t.co/Vs57YzFZX4

Yes, it was a photo op. They happen all the time in politics. Politicians and media hacks who pretend to be outraged by them are generally full of crap. Some of them are rather pointless. Others — like this one — can be powerful and necessary.

Less than 24 hours earlier, St. John’s was on fire and the riot types were wreaking havoc all around the White House. Trump’s quick walk over to the church provided the message that the none-too-peaceful protesters would not prevail. It wasn’t offensive, but we’re living in the era of ORANGE MAN BAD. 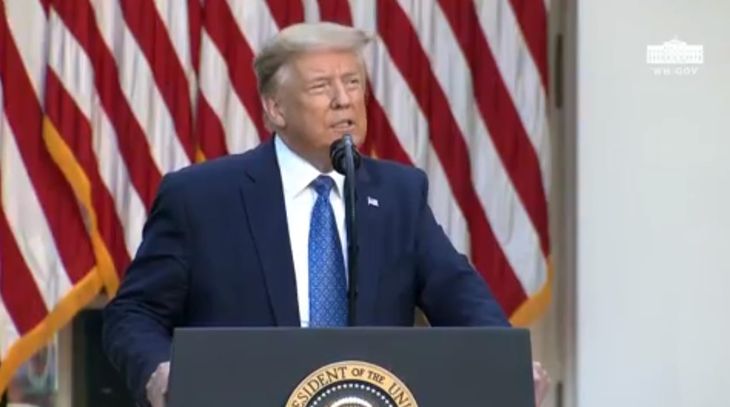 President Trump speaks from the Rose Garden to address the riots. Screenshot from WH video.

Liberal heads were immediately on fire. Both the pastor of St. John’s and the local Episcopal bishop let the leftmedia know that they were unhappy with the president. That actually reflects more poorly on the Episcopalians than it ever would President Trump.

The very same people who were offended by Trump posing with a Bible have been twisting themselves into knots to pretend that all of the burning and looting going on across the country is the result of just a “few bad seeds” who happened to be interfering with all of the fine young protesters out there.

The Democrats do love to gravitate toward criminals and publicly badmouth all law enforcement, like Barack Obama’s former deputy national security advisor here:

It’s impossible not to notice that at least the protests we see always seem peaceful until the police show up.

That, of course, is an outright lie. Almost every high-profile Democrat who’s spoken publicly about these riots has lied. I would say they all have, but I may have missed the one good seed out there. They would rather go easier on the people who are setting churches on fire than on a president who wants to de-escalate tensions.

I added this to the Briefing rather early, then Bryan wrote more about it here.

"The people in Polk County like guns, they have guns, I encourage them to own guns… And if you try to break into their homes to steal, to set fires, I'm highly recommending they blow you back out of the house with their guns." STORY: https://t.co/NjG4Frlphy pic.twitter.com/KH0g3X0POC

So This Is a Thing Now

Some cops have begun kneeling in solidarity with the protesters. I’m not sure how I feel about this but I guess it’s better than everything getting smashed and burned.

This LAPD officer took a knee in front of protesters in Southern California. The entire crowd took a knee along with him. https://t.co/CrzYBcZEOO pic.twitter.com/GY4I9LAeBl

Biden Blames Trump for 60K Deaths for Not Shutting Down Country Earlier, But He Held Rallies Through March 10

Someone tell his nurse that he’s off-leash again. ‘Buy a Shotgun’ Joe Biden Is Back With More Amazing Gun Advice for Cops Battling Leftist Rioters

#TrueStory. Governors Who Shut Down Economies Prove Themselves ‘Weak’ Against Riots and Looting, Trump Says

Shut down Academia. Univ. of Alabama Prof Coaches Rioters on How to Destroy Birmingham Monument

It stopped being about George Floyd about an hour into the first “protest.” Santa Monica Looter Admits He’s Doing It ‘for the Money,’ Not George Floyd

VIDEO: Black Philadelphia Woman Cries Out for Security to Quell the Riots

Is Alexandra Ocasio-Cortez the Leader of the Pack?

Yes, ABC News Just Wrote a Puff Piece on Antifa Amidst the Riots

Domestic Terrorism? Watch as a Buffalo Rioter Uses an SUV to Run Down Police Officers

‘You Do Not Advance Peace by Committing Assault:’ Leader McConnell Condemns Nationwide Riots

Judge Sullivan Delivers Response in Flynn Case and It’s Something

I may have cleaned and oiled some weapons today. Chris Murphy Tries to Shame the Idea of Defending Your Home From Rioters, Goes Silent When Confronted

George Floyd’s Brother, Terrence, at Prayer Vigil: “Let’s Do This Another Way”

Disgusted Minneapolis Biz Owner Goes off on Live TV, Tells Gov and Mayor What to Expect If No Action Is Taken

And we’re apparently electing a lot of dumb white women these days. Seattle Mayor: You Know, White Men Are Behind The Violence At These Riots

Remember the pandemic? Good times. Sweden Launches Inquiry Into Handling Of Pandemic As Death Rate Becomes Highest In The World

Or not. Doctors: Yes, These Protests Are Probably Going To Cause A Spike In Coronavirus Cases

Here’s Why Looters Chose Target Stores As Focus Of Rage

Minnesota Rodeo: National Guard And Police Round Up 150 Curfew Violators — And Find Caches Of Arson Materials

Can Derek Chauvin Be Convicted?

E-scooters just started to return, but Lime, Bird pull them amid protests

UH OH! AOC is NOT happy with the NY Times’ Tuesday front page about Trump’s response to the ‘chaos’

Shades of Stelter: Vanity Fair writer finds the true victims in the spate of riots across the country — our journalists!

‘Chicken Tater!’ Brian Stelter makes tool of himself scolding Katrina B Haydon for tweeting about St. John’s Church fire (he deleted BUT we got it)

Entertainment Break: NYC Mayor de Blasio’s daughter was arrested at a protest. Here is her mugshot.

Clever Churchgoers Avoid Arrest By Disguising Themselves As Rioters https://t.co/RbWWrWRV4j

You Can Sleep Over in This 130-Year-Old Library https://t.co/cqppVf48vq

I needed a little Tucson flavor for the music this morning.

My quarantine whiskey is now curfew whiskey and it tastes slightly better.

PJ Media senior columnist and associate editor Stephen Kruiser is a professional stand-up comic, writer, and recovering political activist who edits and writes PJ's Morning Briefing, aka The Greatest Political Newsletter in America. His latest book, Straight Outta Feelings, is a humorous exploration of how the 2016 election made him enjoy politics more than he ever had before. When not being a reclusive writer, Kruiser has had the honor of entertaining U.S. troops all over the world. Follow on: GETTR, MeWe, Gab, Parler,
Read more by Stephen Kruiser
Tags: DONALD TRUMP PROTESTS GEORGE FLOYD RIOTS