Rioters So Angry About George Floyd ... They Wrote 'Free Palestine' on a Synagogue

Protests over the horrific death of George Floyd at the hands of police officers in Minneapolis have taken on a life of their own as riots broke out across the country. Rioters looted, vandalized, and burned stores, monuments, and buildings that had nothing to do with police brutality, but perhaps the most egregious case came in Los Angeles on Saturday, the Jewish Sabbath.

“Synagogue Congregation Beth [Israel] on Beverly Blvd in Los Angeles vandalized… Tell me this ugly hatred is still about [Black Lives Matter] or [George Floyd]?!” Lisa Daftari, founder and editor of The Foreign News Desk, tweeted with the photo.

Synagogue Congregation Beth El on Beverly Blvd in Los Angeles vandalized… Tell me this ugly hatred is still about #blm or #georgefloyd?! pic.twitter.com/DnCiA2Zc5L

On Saturday evening, rioters threw a brick through the window of Congregation Beth Ahabah, a 200-year-old Reform congregation in Richmond.

Someone just threw a brick, shattering one of the windows of the Congregation of Beth Ahabah, a synagogue. pic.twitter.com/rnpvKpkZRJ 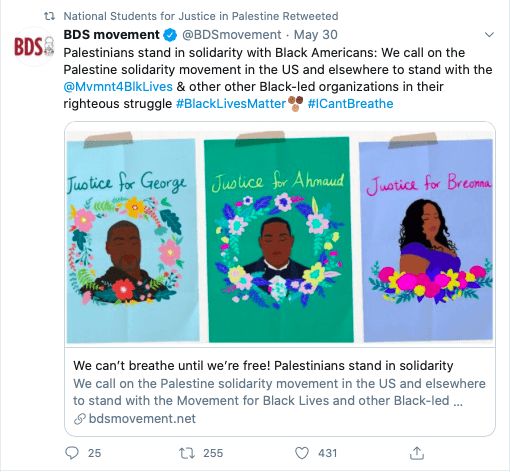 While the outrage over the deaths of George Floyd, Ahmaud Arbery, and Breonna Taylor is justified, groups like Students for Justice in Palestine push a racialist argument against Israel, condemning the Jewish State as somehow white and championing Palestinians as supposedly oppressed “people of color.” A Tufts University student guide condemned Israel as a “white supremacist state.” Rep. Ilhan Omar (D-Minn.) defended the BDS movement, comparing boycotts of Israel to boycotts against Nazi Germany.

No social justice cause justifies anti-Semitism.