St. John’s Episcopal Church at Lafayette Square in the District of Columbia burned Sunday night, having been set ablaze by rioters in another long night of nationwide protests over the killing of George Floyd, who died after a Minneapolis police officer dug his knee into the handcuffed man’s neck until he stopped breathing.

St. John’s, built in 1816, has been called the church of presidents—every president, beginning with James Madison, has attended a service there. It’s located a stone’s throw from the White House. 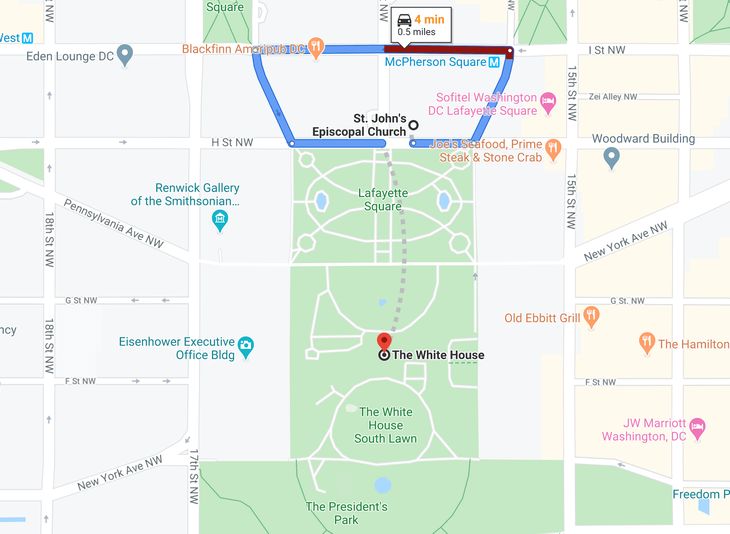 Benny Johnson notes that President Lincoln prayed in St. John’s. That didn’t stop the violent mob from torching it.

Terrorist group ANTIFA outside the White House lighting St. Johns Church on Fire and ripping down its American flag.
St. John’s was built in 1816 every president since Madison has worshiped there.
Abe Lincoln prayed in this building.
Send ANTIFA to GITMO!pic.twitter.com/iUfnZV9yhl

Footage from the scene is devastating:

D.C. Fire and EMS responded to the blaze:

Fox News is reporting at this hour that the fire, which began in the parish office of the church, has been extinguished by D.C. firefighters.

The National World War II Memorial was among the landmarks in the nation's capital that were vandalized amid weekend protests. https://t.co/eFe5igg5ur

Lafayette Square near the White House:

On Lafayette Square, near the White House this morning. pic.twitter.com/12PHu8nQuG

Meanwhile, more than 50 Secret Service agents have been injured tonight by the “peaceful protesters.” The city is under a curfew and under the protection of the National Guard, but that hasn’t stopped the rioters from causing mayhem and destruction across the city.

Things are heating up back at Lafayette Park. I’m seeing way more water bottles thrown at Secret Service and Park Police than earlier.

A lot of people here tonight want to avoid another escalation and I’m hearing protesters trying to talk bottle throwers out of it. pic.twitter.com/CfAglGixu9

Now we’re seeing unconfirmed reports that the White House guardhouse is on fire:

The guardhouse at the White House has been set on fire. The police rushes forward and gassed the crowd. pic.twitter.com/Hi9XcSbpiJ

Pray for our law enforcement officers who are willingly putting themselves in harm’s way to protect D.C. and other cites across the nation.

‘We Weren’t Goin’ to Sit Back and Let It Happen’: Italian Bakery Owners Welcome Cleveland Looters with an Impressive Arsenal

Let This Sink In: Churches Are Shuttered Over COVID-19 Fears, But Violent Anarchists Are Allowed to Congregate with Impunity