As the world spirals into chaos, it’s easy to start feeling sorry for yourself. You might be watching the rioting and looting and human suffering on the news and wondering: “What’s going to happen to me and my family? I’ve never hurt anybody. Why am I being blamed for the actions of cops I’ve never met, in a city I’ve never even visited? Will my business survive? Will I survive? These past few months have been miserable, but somehow it keeps getting worse and worse. What the hell is going on???”

Well, you need to stop whining. There are actually Americans out there in very real pain right now, and they need your help and support.

Dozens of Facebook employees, in rare public criticism on Monday of their own company, protested executives’ decision not to do anything about inflammatory posts that President Trump had placed on the giant social media platform over the last week.

The employees, who took the day off by logging into Facebook’s systems and requesting time off to support protesters across the country, also added an automated message to their emails saying that they were out of the office in a show of protest…

The movement — a virtual “walkout” of sorts since most Facebook employees are working from home because of the coronavirus pandemic — comes as staff members have circulated petitions and threatened to resign.

Oh. Okay. Well, I’m sure those employees are simply irreplaceable. They’ve got all the leverage here. It’s not as if anybody is looking for a job these days, right?

As for their boss:

Mr. Zuckerberg has argued on a number of occasions that Facebook should take a hands-off approach to what people post, including lies from elected officials and others in power. He has repeatedly said the public should be allowed to decide what to believe.

That’s ridiculous, right? I demand that a handful of tech oligarchs decide for me what is true and what is false. Expecting me to figure it out for myself, and respond accordingly, is un-American! 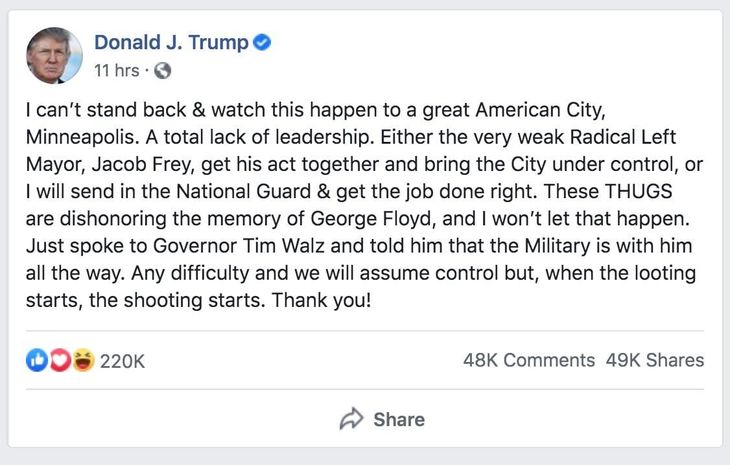 Now, you may agree with what the president says here. You may disagree. You may have no opinion at all. But that doesn’t matter. It’s not up to you. It’s up to your moral, ethical, and intellectual betters at Facebook. They should be the ones who decide what information you get, because you might get information you can’t handle. You can’t be trusted to read stuff you might interpret the wrong way. You might start getting ideas you shouldn’t have. You need a gatekeeper. That used to be the role of the mainstream media, such as newspapers and network TV and whatnot. Now it’s Facebook.

And they know it. Here’s one such reaction from a Facebook engineer:

Facebook's inaction in taking down Trump's post inciting violence makes me ashamed to work here. I absolutely disagree with it. I enjoy the technical parts of my job and working alongside smart/kind people, but this isn't right. Silence is complicity.

Who better to tell you what the truth is, and isn’t, than a 20-something software engineer in the San Francisco Bay Area?

Free speech is too important to leave in the hands of the people. If Mark Zuckerberg refuses to tell you what to think, that’s all the proof you need that he’s a fascist!

(Okay, that’s enough of that. Trying to think like these idiots gives me a headache even at the best of times…)