This is the first Memorial Day that I’ve been in charge of the Morning Briefing and I would like to begin by honoring those American service men and women who have sacrificed their lives so that people like me can be free to shoot my mouth off for a living. There never really seems to be any adequate way to say or do that, but I keep trying every year on Memorial Day. God bless all of them and the loved ones they left behind.

and let perpetual light shine upon them.

May the souls of all the faithful departed,

through the mercy of God, rest in peace.

It Is Memorial Day, Isn’t It?

I have to keep double-checking ever since we stopped paying attention to days. Memorial Day weekend, while a solemn occasion, is also the official kickoff to summer here in the U.S., but it doesn’t have that transitional feeling that it usually does now that calendars are a thing of the past.

Memorial Day traditions are out the window for the most part this year. People weren’t even allowed to continue the tradition of placing American flags on graves at Veterans’ cemeteries because the shutdowns continue to find ways to be anti-American.

The Sunday of Memorial Day weekend is the biggest day of the year for auto racing fans. I usually wake up at the crack of dawn to watch the Monaco Grand Prix F1 race, then the Indianapolis 500, then the Coca-Cola 600 NASCAR race. The NASCAR race was the only one that was run this year, so there was at least something. It was weird seeing the stands empty and everyone wearing masks for the interviews. I’ve been dying for sports to come back, but now I’m not so sure if the empty stadiums and freak-show masks are going to be tolerable for me. 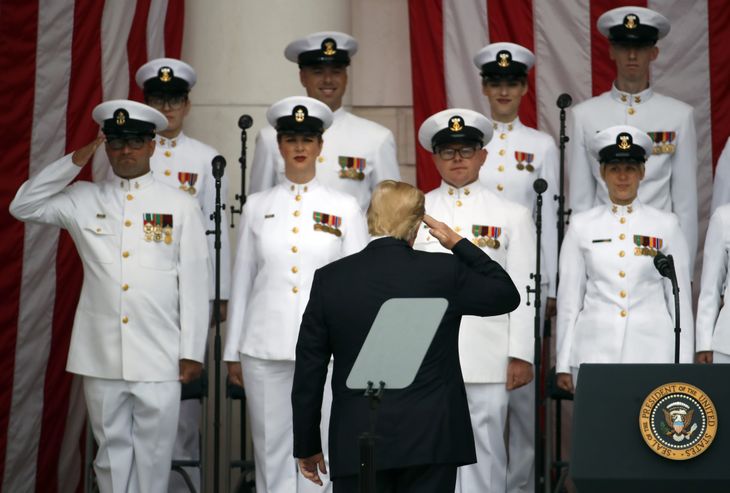 President Donald Trump salutes the Navy Sea Chanters as he departs after speaking at the Memorial Amphitheater in Arlington National Cemetery on Memorial Day, Monday, May 28, 2018 in Arlington, Va.(AP Photo/Alex Brandon)

Memorial Day weekend is typically the biggest blockbuster movie opening week of the year but now we’re wondering if theater-going as we know it will even survive all of this.

Once again I’m pondering if there is any kind of normal to get back to. Our recreational Memorial Day traditions have been upended but we can still take time to pause and reflect on what this day is really all about, and that’s what really matters.

Do People Not Know What Memorial Means?

Most Americans have no idea why we celebrate Memorial Day https://t.co/2FzZsxXGle pic.twitter.com/uZCsg3dwET

I really don’t get the confusion about Memorial Day and Veteran’s Day. The words Memorial and Veterans seem fairly self-explanatory as to what we are supposed to be focusing on each day.

My latest column: Watching Kayleigh McEnany Beat Up the Corrupt Press Is a Never-Ending Delight

Don’t Buy the Misleading Figures. Here’s the Real Story About How the U.S. Matches Up on Coronavirus Deaths

Because 2020 so why not. Save the Rats! CDC Warns of Rat Population Spiking During Restaurant Lockdowns

The Most Absurd Lockdown Recommendation Based on COVID-19 Models Yet

This was tacky and even worse that they did it on Memorial Day Weekend. New York Times Fills Front Page With 1,000 Names of Coronavirus Dead

Boris Johnson Chief Aide Under Fire For Travel During Lockdown

CNN’s Latest Play? Tattling on Trump While He Is Golfing

The SEC Asks, ‘Are You Ready for Some Football?’

It’s all stupid. The CDC Provides Draconian Guidelines for Reopening Schools Without Reading Its Own Research

Hey, Joe Biden: The Biggest Defenders of Black Americans Throughout U.S. History Have Been Republicans

Will It Be War? Venezuela Escorts Iranian Tankers in ‘American Lake.’ U.S. Considers a Strike

Social Distancing, What Does It Mean?

Any Price to Save the Institutions?

NAACP Denies Biden Claim it Endorsed Him ‘Every Single Time’

It’s a Bird, It’s a Plane, It’s the Trump Campaign

“Empty The Jails” Beneficiary Rearrested In Under An Hour

As Northam Hints At Mask Mandate, He Should Remember The 2A Sanctuary Movement

Growing Demand For Answers Over Possible Surveillance Of Maine Gun Owners, Others

Schlichter: Gropey Joe Thinks He’s an Expert On What Minorities Should Think

Trump Just Added Another Country to the Travel Bans

Latest Move by Flynn Judge Has Raised Some Eyebrows

There’s no “SCIENCE!” reason for this. University of Michigan president warns in-person classes, and the football season, could be canceled for 2020

Good news. ‘I am alive by the grace of God’: Lt. Col. Allen West ‘resting and in stable condition’ after motorcycle accident

Biden: 'If You Don't Let Me Sniff Your Hair, You Ain't A Woman' https://t.co/Q1y6PpIWLE

I’ve eaten so much garlic lately that I want to socially distance from myself.

PJ Media senior columnist and associate editor Stephen Kruiser is a professional stand-up comic, writer, and recovering political activist who edits and writes PJ's Morning Briefing, aka The Greatest Political Newsletter in America. His latest book, Straight Outta Feelings, is a humorous exploration of how the 2016 election made him enjoy politics more than he ever had before. When not being a reclusive writer, Kruiser has had the honor of entertaining U.S. troops all over the world. Follow on: GETTR, MeWe, Gab, Parler,
Read more by Stephen Kruiser
Tags: MILITARY