Social Distancing, What Does It Mean?

Social distancing has become the mantra for the practice that will save us from exponential coronavirus spread and a devastating number of deaths from COVID-19. Nearly every state and local policy in the U.S. specifies that businesses must operate to maintain six feet of social distancing.

Whether it is reducing capacity inside restaurants or waiting in your car until your hairdresser is ready for you, it is all aimed at keeping you the appropriate distance from other human beings. According to the experts, this will prevent you from contracting the virus from your fellow citizens.

So how can we be sure we are practicing social distancing correctly? According to Twitter user Justin Hart, I guess we can’t. Hart has been deconstructing COVID-19 models, graphs, and data for weeks now and recently shared the social distancing guidelines from various nations. 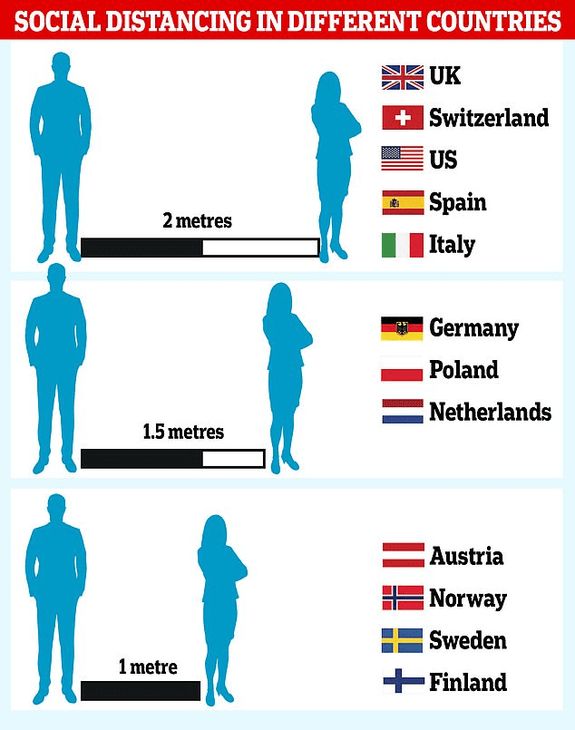 So, you are really safe if you stand somewhere between three and six feet apart? Maybe. Researchers are now saying the distance is based on fragile research and may be a barrier to getting back to full economic activity. The six-foot distance is also embedded in the guidelines for schools to reopen recently issued by the CDC.

The Most Absurd Lockdown Recommendation Based on COVID-19 Models Yet

There are also lines of tape in every retail outlet, signs on restaurant tables and inoperable treadmills at the gym I belong to in order to maintain this distance. What is this based on? Great question. From the Daily Mail:

One of the top scientific advisers to the British Government said the two metre (6’6″) social distancing rule is based on ‘very fragile’ evidence.

People in the UK have been urged to stay at least 2m, or six-and-a-half feet, away from anyone who they don’t live with, to avoid catching or spreading COVID-19.

But the distance may be a non-scientific estimate that just caught on in countries around the world, as top researchers say there is not solid evidence to back it up.

Professor Robert Dingwall, a sociologist and advisor to the government in the U.K., has gone so far as to refer to the longer distancing guideline as a rule of thumb rather than a recommendation based in research. Government officials told him that:

[They] did not think the British population would understand what one metre was and we could not trust them to observe it so we doubled it to be on the safe side.

Even the information in the article that seems to support the longer social distancing is confusing. One study asserts this:

It follows a study last week that showed talking loudly for just one minute can produce a high load of viral particles that stay in the air for eight minutes.

Okay. Is that load significant enough to cause an infection? That seems like a rational question. Next, why is it assumed people will be shouting at each other from a little over three feet away? I notice a lot more shouting between friends who are out and must stay six feet apart.

The World Health Organization and several other countries have already moved to a distance around three feet. Meanwhile businesses and schools in the countries that maintain the longer distance are being asked to radically redesign their spaces and procedures to maintain six or more feet of distance between people. Yet:

Two metres is considered a safe distance by health chiefs because the coronavirus predominantly spreads in respiratory droplets in a sneeze or cough. These large droplets fall to the floor due to gravity within a short distance, around one metre, from the person who expelled them. The ‘safe’ distance is double that in order to optimise protection.

Two metres is not a ‘magical number’ according to John Simpson, a medical director at Public Health England. He said ‘there is a duration and distance element to exposure that has to be worked through’, as scientists continue to work out how the coronavirus spreads in different conditions.

Do you think we could work out these duration and distance elements before employers and educators are asked to radically modify their operations to an arbitrary social distancing requirement? If we know the predominant mode of transmission is sneezing and coughing, can we stop theorizing about “loud talking?” Individuals need to make reasonable risk assessments. Researchers should be telling us what they know, not what they think.

There are much less drastic steps for employers, business owners, and schools to take to help decrease the spread of the virus, especially when thousands of cities and counties across the nation have had limited experience with the virus. The Metropolitan Transit Authority in New York City is going to use UV-C light to clean surfaces in subway cars. Is there an application that can be used in schools, offices, and businesses? Killing the virus seems like a better option than running from it.

For example, Texas currently has about 0.06% of its population infected with COVID-19. Yet social distancing is in place for everyone everywhere. Does the costly remaking of business, employment, and education make sense to maintain what is currently a “rule of thumb?” I have my doubts.