Despite not being elected to represent any citizen of Texas at this point, Beto O’Rourke decided to comment on the state’s reopening. As usual, he gets his assessment wrong.

Not surprisingly, he says the steps Governor Greg Abbott is taking to reopen the economy are very, very bad. O’Rourke married very well, so it is just adorable that he is tweeting this from the expansive home he shares with his wife, a real estate tycoon’s daughter.

He often posts videos and pictures from his well-furnished and expansive home. One might wonder what ice cream he stocks in his freezer. It is likely Beto is not feeling the pinch of the economic shutdown being felt by millions of Texans.

A deadly lesson in failed leadership: Texas leads the country in uncontrolled spread of coronavirus. Despite what Trump & co. (Abbott & Patrick) say, stay home if you can & wear a mask if you have to go out. It will save lives. https://t.co/UjQWqnQgPD

First of all, for the folks in the photo, COVID-19 is not likely to be deadly. We know from nationwide antibody testing done by Stanford University and others, the asymptomatic case rate sits around 70%. The majority of the remaining 30% have mild-to-moderate disease symptoms. A fraction requires hospitalization and we have a pretty good idea who is at risk for that type of severe disease.

Next, the way the Washington Post presents the new case data is misleading and deliberate. One of the first clues the article is suspect comes in the second paragraph (emphasis mine):

Researchers at Imperial College London created a model that incorporates cellphone data showing that people sharply reduced their movements after stay-at-home orders were broadly imposed in March. With restrictions now easing and mobility increasing with the approach of Memorial Day and the unofficial start of summer, the researchers developed an estimate of viral spread as of May 17.

They are actually citing research from the Imperial College, the same institution that built the COVID-19 model that shut down the world. It was recently reported that this model was built on absolutely garbage code. So why is any serious news outlet taking data from this institution? One has to wonder.

Of Course the Public Is Panicking Over This Kind of Misleading COVID-19 Data. Here’s How It Should Be Presented

The article is pushing concern over the three-day Memorial Day weekend. As states open up, people will move around more and be spending time with others. However, if the picture in the article is representative of the concern, O’Rourke can just calm down.

The latest news is being outside, in the sun just like the individuals on the patio in the picture, is a great idea. The CDC has told us coronavirus likely does not transfer on surfaces and virus transmission from person to person has required proximity and time. So, outdoor barbecues and visits to parks and beaches are probably a great way to spend the weekend.

Finally, using the raw number of new cases as the primary descriptor of the severity of a state’s experience with COVID-19 is just dishonest. The media is playing this game with Georgia and Florida, as well.

The fact is, all of these states have significantly increased testing since the beginning of May. Of course they are going to find more cases of a largely asymptomatic or mild illness. The correct metrics to monitor are the percent of tests that are positive and hospitalizations. The percent positive rate is falling in all of these states and their hospital systems are secure.

In Texas, the positive case rate has fallen from a high of 15% down to 5%. There are currently 1,688 patients hospitalized with COVID-19 and the state has a great dashboard for residents to use to assess the situation in their own county. Even better, it estimates current cases, not just total cases. 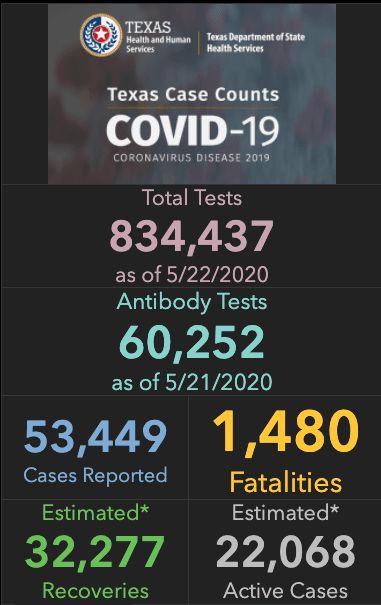 In a low-population-density state of over 40 million people, 0.06% of the population is currently infected with COVID-19. A whopping 7.6% of those with the virus are currently hospitalized. Texas is also doing one of the best jobs with nursing home residents. The number of fatalities in Texas nursing homes is well below the national average of 52%, sitting at 37.6%.

Overall it appears Texas is well-positioned to continue reopening. The virus is not going to disappear, and the state appears to be doing the right things to protect the most vulnerable and keep the percentage of new cases steady.

So, maybe it is time for Beto to exit stage left. If Texans wanted him to make policy or economic decisions, he wouldn’t be an also-ran in his last two races.