Kayleigh McEnany vs. the Press Isn’t a Fair Fight

Although I write about the political media a lot, I don’t consume as much of it as most people might think. The political press in this country is full of tedious, irresponsible idiots, and who needs to subject themselves to that? White House Press Secretary Kayleigh McEnany is changing my attitude on that a bit though.

McEnany so routinely chides the White House press corps that they’ll probably keep wearing masks long after the coronavirus pandemic is over just to hide their embarrassed faces.

Sarah Sanders was good at knocking the press pool around a little, but it’s McEnany’s style that I have fun watching. She effortlessly sneaks barbs in and she seems to really be enjoying herself.

Earlier in the month McEnany responded to a deliberately obtuse question from a reporter about Obamagate by noting that there had been a “lack of journalistic curiosity” in the press about the scandal.

Like her boss, McEnany is fond of reminding CNN what a bunch of hacks they are, which never, ever gets old.

Of Course, the Press Makes It All About Themselves

For too many years now journalists in general have been injecting themselves into stories, which was a professional taboo a very long time ago. In the Trump era, the White House press corps has really taken this lack of professionalism up a notch or two. CNN’s Jim Acosta is a self-aggrandizing tool who is just there to grandstand.

The press and talking heads on cable news are not pleased with McEnany’s performance so far, which just makes me like her even more, of course.

On this week’s Fox News Sunday, FNC’s Trump-hater in-chief Chris Wallace led a complaint panel that devoted some time to whining about McEnany. My colleague Julio Rosas covered it at our sister site Townhall:

Jonah Goldberg, editor-in-chief of The Dispatch, criticized White House Press Secretary Kayleigh McEnany on Sunday, saying her treatment of the White House Press Corps is “indefensible and grotesque” and akin to being a “Twitter troll” who does not care about her actual job.

Can somebody please direct Jonah to the nearest fainting couch? It should be noted that Jonah is a never Trump guy who isn’t going to like anything done by anyone in this administration. And Chris Wallace has become as unwatchable as Jake Tapper or Chuck Todd.

A rather lively conversation broke out on Twitter about the Fox News Sunday segment, specifically Jonah Goldberg’s comments. Here was one of my favorites:

I think it’s cool that the guy who spent the 00’s calling the French “Cheese Eating Surrender Monkeys” because they didn’t join us in the Iraq invasion is crying about the coarsening of American politics. https://t.co/NTNvYaZqdy

Not surprisingly, most of the people I pay attention to were pro-Kayleigh but even more anti-media:

Yes, agreed. Conservatives disappointed by weak pushback against media corruption definitely appreciate how good she is at putting it on blast, particularly as it relates to the “indefensible and grotesque” Russia collusion hoax and other journalistic fiascos. https://t.co/QwJOz6H2Bs

That’s what mystifies me about people who still claim to be Republicans but complain about Trump’s — and now McEnany’s — treatment of the media. The press have been awfully biased for decades but, as Jesse said, they’ve become weaponized lately. It was bad when George W. Bush was in office, then they abandoned all pretense of objectivity while swooning over Barack Obama for eight years. What’s gone on in the Trump era, however, is straight-up journalistic malpractice. Anyone focusing on the administration’s behavior toward the media is blessing that behavior.

The self-righteous “harumph” Republicans who complain about President Trump’s shoot-from-the-lip style or Kayleigh McEnany’s knee-capping of the irresponsible press pool would do well to remember that the press is still going to be awful and biased long after this president is out of office. They’ve more than earned their “enemy of the people” status and will continue to do so.

The never-Trump Republicans who are currently the darlings of mainstream media are going to have a rude awakening when Trump is out of office and the corrupt MSM no longer has use for them. Maybe then they can discover some intellectual honesty regarding media bias.

The behavior of McEnany’s that Jonah Goldberg finds “grotesque” is a gale-force breath of fresh air for those of us who long-ago grew weary of the press’s anti-conservative antics. She’s the perfect press secretary for this president, especially at this time. To my continual surprise, the press has become even worse during this pandemic lockdown nightmare.

Trump needs someone precisely like McEnany in that role right now. A press secretary who will go on the offensive when the press corps is living down to expectations. If her Friday press briefing is still the topic of conversation for the Sunday talking heads shows she’s doing something correctly. 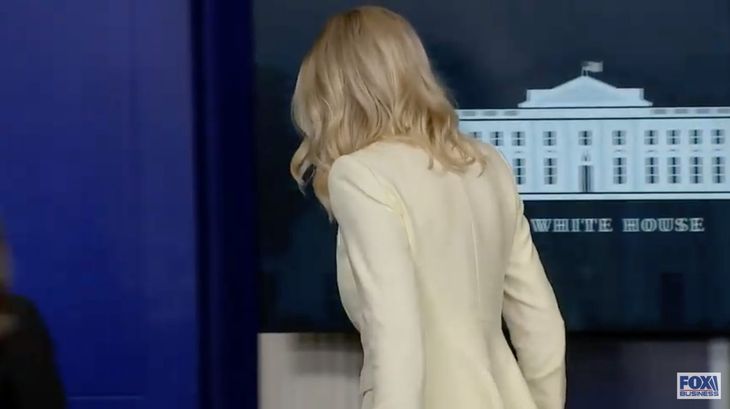 Kayleigh McEnany walks away from the WH press corps

It’s a tough job, and those who hold it tend not to hang around for too long. With any luck, Trump will win in November and Kayleigh McEnany will still be there and will stick around for a while so we can all continue to enjoy whirl away from a stunned room of reporters after having delivered another smackdown.

PJ Media senior columnist and associate editor Stephen Kruiser is a professional stand-up comic, writer, and recovering political activist who edits and writes PJ's Morning Briefing, aka The Greatest Political Newsletter in America. His latest book, Straight Outta Feelings, is a humorous exploration of how the 2016 election made him enjoy politics more than he ever had before. When not being a reclusive writer, Kruiser has had the honor of entertaining U.S. troops all over the world. Follow on: GETTR, MeWe, Gab, Parler,
Read more by Stephen Kruiser
Tags: DONALD TRUMP MEDIA BIAS KAYLEIGH MCENANY