The Morning Briefing: Censorship Has Mutated and Is Thriving During Coronavirus Pandemic

Censorship is unfortunately alive and well during this pandemic madness, taking on a variety of mutated forms as it participates in the various rights-trampling parades going on in America.

We have seen the petty tyrant governors and mayors use this time to overreach and cavalierly brush aside constitutional rights in the name of safety. The First Amendment has been particularly roughed up, with the free exercise of religion, free speech, and the right to peaceably assemble all taking major hits.

Matt Taibbi — not exactly a right-wing stalwart — warned last month of what he called the “Inevitable Coronavirus Censorship Crisis.” He was responding to a rather insane and disturbing article in The Atlantic that was basically making the case for adopting a more ChiCom approach to dealing with internet speech. That’s right, a venerable American publication was advocating for more censorship.

The ChiComs themselves aren’t letting the crisis go to waste. Pro-commie establishment members of Hong Kong’s parliament are pushing legislation to censor and punish any language mocking the mainland’s national anthem.

As I wrote last weekend, social media platforms are using the pandemic as an excuse to censor any voices that run counter to the preferred narrative. There is to be no real free speech or debate about how we should proceed through each new phase of dealing with the pandemic. Each of the major platforms has opted to be tools of the various states and prop up whichever arbitrary shutdown rules are in place.

The media bias we’ve seen during all of this is a perverse sort of self-censorship that the MSM hacks are doing to themselves. They’ve been running with whatever the official word from China is, and surely they know that the censoring is kind of baked into the cake with that deal. It’s always amazing to see American “journalists” be drawn to the types of ideologues who would be the first to shut them down.

This may not be directly related to the coronapocalypse, but it happened on Monday. The United Nations took some time to offer the great unwashed a list of words that we should no longer say. I’m not really sure which part of the UN’s charter lays out why it should be in the censorship game, but then I still haven’t figured out what in the hell they have to do with climate change. 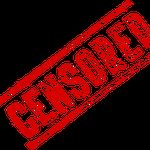 Image by Clker-Free-Vector-Images from Pixabay

The shutting down of church services is a form of censorship as well, and I can’t help but believe that the Democratic governors have enjoyed keeping the church folk away from worship just a little too much. Thankfully, saner legal heads seem to be prevailing on that front in the last couple of weeks.

The policing of speech had become worrisome long before this pandemic hit us. The danger now is obviously having some of these more tyrannical types make some new permanent censorship rules. Speech that’s censored today may very well remain censored when we emerge from this rough patch.

I’ve been fighting censorship since I first started doing stand-up and it’s a battle I’m willing to wage until they find a way to…censor me.

This Ought to Work Out Well

Many low-wage workers earn more on unemployment than in their former jobs https://t.co/jMwBs9efgG pic.twitter.com/7iKO5Hq9KX

My Tuesday column: My Last ‘Obama Is the Worst’ Column This Month (I Think)

Sheriff Revolts Against Lockdown: ‘We Are Not Stormtroopers. We Are Peacekeepers’

Ben Sasse Picks the Correct Fight With His Democrat Challenger

Shock! Pensacola Shooter Turns Out to Be Al-Qaeda Operative Who Plotted His Attack for Years

The Real Coronavirus Timeline Liberals Don’t Want You To See

Attorney General Barr Just Made Major News on ‘Obamagate.’ You’ll Want to Sit Down for This

Quarantine them in a jail. Why Did New York Infect America With Coronavirus? New Report Blames Cuomo, de Blasio

Liberals’ Direct Cash Payments Promise to Do to Main Street What They’ve Done to the Black Community: Crush It

VodkaPundit, Part Deux: Giving Government the Finger: Americans Ending the Shutdown on Our Own Terms

I like this story. The internal watchdogs Trump has fired or replaced

Pelosi’s Strange Reason for Not Wanting Trump to Take Hydroxychloroquine

Rep. Jim Banks: ‘Shameful’ Dems Are Focused on Going After Trump Instead of Holding China Accountable

Petty Tyrant Update. Ohio Governor Reveals How State Will Respond to Businesses Not Complying with Restrictions

Trump to the WHO: I’ll Permanently Pull U.S. Funds From the Organization Unless…

James Woods: Trump ‘Loves America More Than Any President in My Lifetime,’ Obama Admin Was ‘Scum and Villainy’

Twitch Thots are Horrible but They’re a Symptom, Not a Disease

When Even CNN Gets There’s a Problem in the Flynn Case, But the Judge Doesn’t, You Know It’s a Problem

LA County Public Health Director Isn’t an M.D.; Why Do These Official Websites Say She Is?

Navarro: Let’s Face It, The CDC “Really Let The Country Down” In The COVID-19 Crisis

Eric Trump: Dems Have A Very Deliberate Strategy To Use Social Distancing Rules To Prevent Trump From Holding Rallies

Losing. Their. MINDS! Chris Cillizza calls Trump ‘an unlikable jerk that gets stuff done’ and the Left breaks out pitchforks and torches

Back To Normal: Conservatives Go To Work While Liberals Stay Home https://t.co/GKabQNFVrM

Let’s treat Taco Tuesday with the reverence it deserves, people.

PJ Media senior columnist and associate editor Stephen Kruiser is a professional stand-up comic, writer, and recovering political activist who edits and writes PJ's Morning Briefing, aka The Greatest Political Newsletter in America. His latest book, Straight Outta Feelings, is a humorous exploration of how the 2016 election made him enjoy politics more than he ever had before. When not being a reclusive writer, Kruiser has had the honor of entertaining U.S. troops all over the world. Follow on: Gab, Parler, MeWe
Read more by Stephen Kruiser
Tags: FIRST AMENDMENT FREE SPEECH CENSORSHIP