Attorney General Barr Just Made Major News on 'Obamagate.' You'll Want to Sit Down for This

That sound you hear is the deep groan of disappointment by people who had hoped that Attorney General Bill Barr would investigate former President Obama for his part in “Obamagate.”

In just the past few days it’s been publicly disclosed that both Obama and Vice President Biden were in an Oval Office meeting in which the investigation into Trump National Security Adviser General Mike Flynn was discussed. It was also revealed that Biden personally “unmasked” Flynn’s name to discover more information about Flynn. President Trump calls the spy program “Obamagate.”

The highest levels of the U.S. intelligence community, including the CIA, Department of National Intelligence, and the FBI, were put into the service of spying on Trump. They used Flynn and three others to get an inside look at the campaign. The basis for the investigation was the ridiculous “Steele Dossier,” which those same intelligence officials knew was bogus and likely Russian disinformation. Nevertheless, those same officials used the secret surveillance court to get the warrants to spy based on information they knew was fraudulent.

Barr called the “Crossfire Hurricane” investigation into the Trump campaign and presidency – “Obamagate” – a “grave injustice, unprecedented in American history.”

He continued that the pretext for the investigation was the Russian collusion narrative was “false and utterly baseless.” And he disparaged “two different standards of justice. We can’t allow this to ever happen again.”

But Barr said Monday that the Department of Justice is unlikely to charge either former President Obama or Vice President Joe Biden in the “Obamagate” spying program on the Trump campaign, Law and Crime reports.

“This is especially true for the upcoming elections in November,” Barr said, adding that it is “critical” that we have a 2020 election in which the American people have a chance to vote based on “robust” policy debate — not criminal debate.

“Any effort to pursue an investigation of either candidate has to be approved by me,” Barr noted. In January, Barr said that the FBI, heading forward, would have to get approval from him before “opening of a counterintelligence investigation of a presidential campaign.”

Of course, using investigations to exact political revenge against Donald Trump is precisely what the Obama Administration’s “Obamagate” did with the “dossier” purchased by the Hillary Clinton campaign and the DNC. 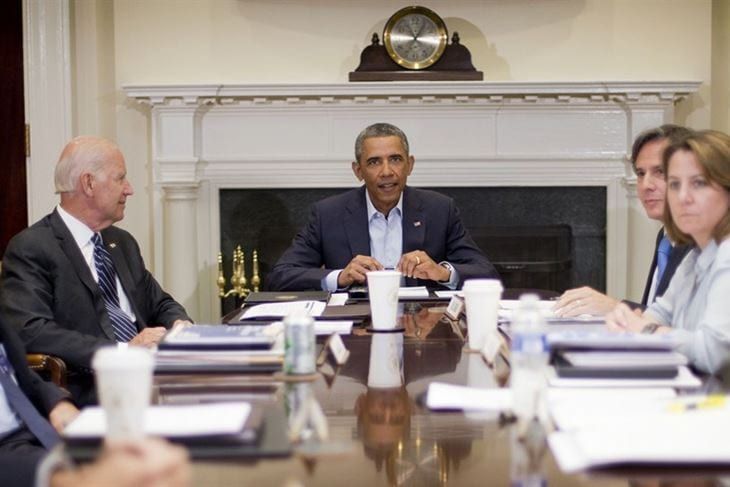 Barr echoed Justice Elena Kagan’s words in the U.S. Supreme Court’s decision on “Bridgegate” that some things may be corrupt and wrong but don’t necessarily rise to the level of a federal crime. He said U.S. Attorney John Durham’s investigation into “Obamagate,” Trump-Russia, and Spygate, which refer to the same thing, is focused on others who have potentially committed a crime.

“I have a general idea of how Mr. Durham’s investigation is going. … There’s a difference between an abuse of power and a federal crime. Not every abuse of power, no matter how outrageous, is necessarily a federal crime. Now, as to President Obama and Vice President Biden, whatever their level of involvement, based on the information I have today, I don’t expect Mr. Durham’s work will lead to a criminal investigation of either man. Our concern over potential criminality is focused on others.”

Barr said he won’t use his office to get into political “tit for tat.”

“The Durham investigation is trying to get to the bottom of what happened, and it will determine whether there were any federal laws broken, and, if there were, those who broke the laws will be held to account,” Barr said. “But this cannot be and it will not be a tit for tat exercise. We are not going to lower our standards to achieve a particular result.”

Barr just signed off on dropping the case against General Flynn in the interest of justice as well, argues that there’s only one standard of law and it should be equally applied. It’s hard to see such outrageous behavior on the part of the Obama Administration without wanting a little retribution against the persons who, it’s assumed, “green-lighted” it.

After calling the entire “Obamagate” “Spygate” operation “abhorrent” and something that must not happen again, it’s disappointing that Durham won’t make Obama and Biden criminally pay for their part in it.

But Barr says the focus is on others. If I were former CIA Director John Brennan, Obama Director of National Intelligence James Clapper, former FBI chief Jim Comey, as well as his Deputy Andrew McCabe,  and the notorious cast of characters involved in this “grave injustice” I’d say the water just got even hotter.

Watch as AG Barr Calmly Shapes C-4 Into the Image of John Durham, Places It Under ‘Nothing to See Here’ Take on IG Report