As Texas reopens, a kind of normal is returning. Last week I was able to make an appointment and obtain a haircut, all perfectly legal. I went to a nearby lake this weekend and saw what looked like a pretty normal number of people, out fishing and kayaking and biking in the sun that’s known to kill the virus with its blaring UV light. It was so nice I took the camera and could have snapped enough pics for a wildflower calendar. Texas really is beautiful before the sun turns the state into a brick oven. 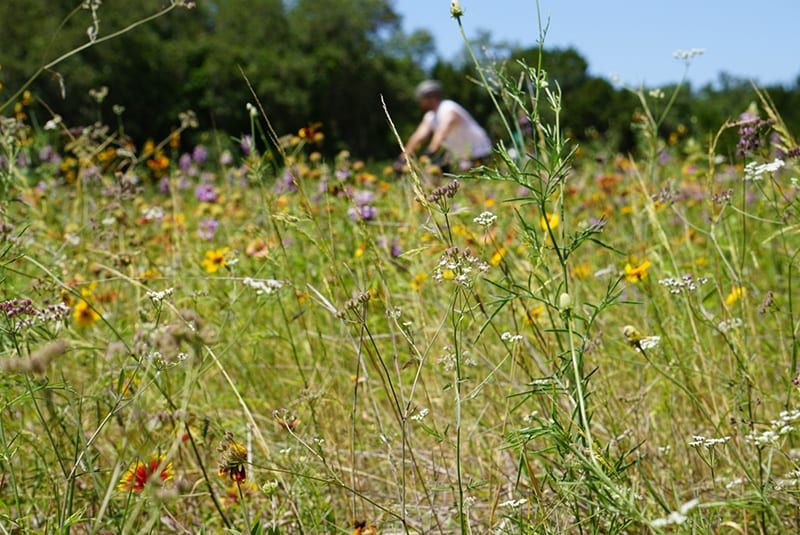 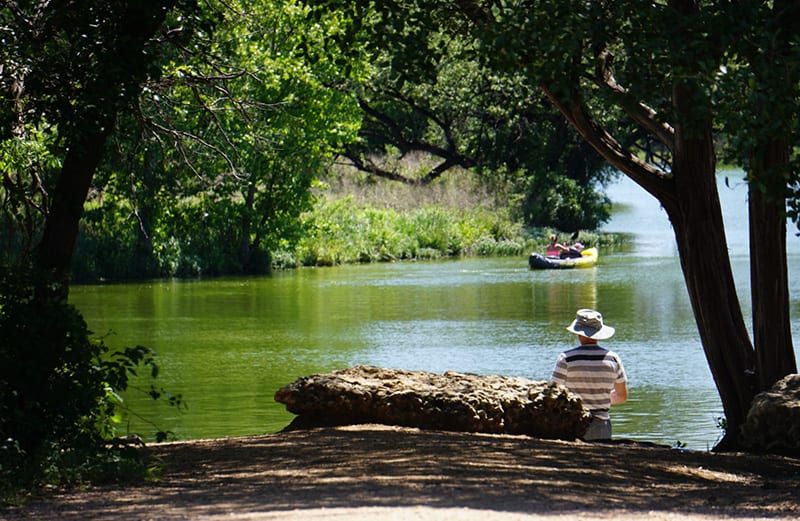 Monday morning some gyms around the state opened so I went for a quick drive around the area to see which ones were and weren’t. Mine had emailed me over the weekend that it was opening, so I went in for a quick workout. Other than the masks on the staff and a few new procedures such as touchless check-in, all seemed fairly normal. Some other gyms in the area chose to remain closed a little longer. Overall things seem pretty calm and edging back to normal.

But if you listen to CNN, coronavirus cases are outta control and there’s just no end in sight.

“Texas sees the highest number of coronavirus cases in a day!” they declare. “Deaths too!”

Texas is seeing the highest number of new coronavirus cases and deaths just two weeks after it officially reopened. @JohnKingCNN explores the trend in Texas as the debate on risk of reopening continues.https://t.co/5fvdaNxmba pic.twitter.com/pSV0U8fd1q

Sure, sure, CNN. We are testing more. That means we will see more cases. You’re not likely to see fewer deaths because numbers don’t really work that way.

RealClearPolitics‘ Sean Trende had had enough after seeing the report above, and went on a Twitter tear.

BUT, here's the 7-day rolling average of tests in Texas. 3/ pic.twitter.com/UjXxcPwqA7 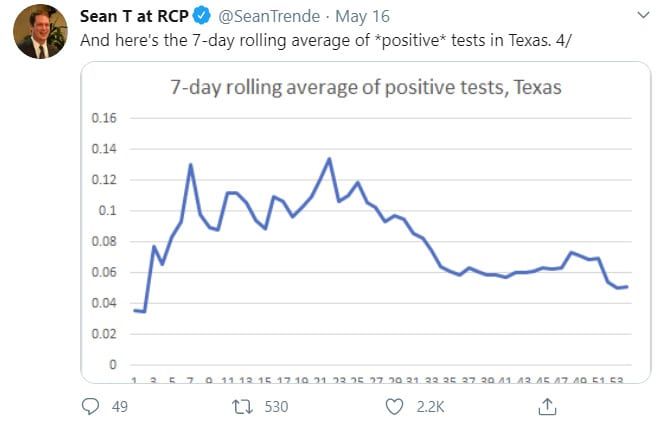 So the overall positive test result outcome is trending down. This is a good thing. It’s not entirely expected. In a post a week or year ago, it’s hard to tell anymore, I wrote that once the state starts reopening we’re likely to see more positive test results because we’re testing more, and people are out and about more.

The purpose of the lockdown was never to eradicate the virus or wait on a vaccine (which may never come). The purpose of the lockdown was to give the healthcare system time to ramp up testing and be prepared to handle what the models predicted would be a deluge of deadly virus cases requiring long stays in emergency rooms. The healthcare system did get ready. Harris County built a whole temporary hospital — and never had to use it. That’s good news. Imagine if we would have needed it.

The models were wrong. They were garbage code and they were based on faulty assumptions. Some of that is China’s fault for not disclosing its experiences with the virus in those early critical days. We should never forget that. It’s easy to blast the models, and they deserve it. But behind all of this is a communist regime, unelected and unaccountable to its people, that engaged in a massive coverup and ruined the world for a while.

Returning to Texas’ COVID numbers, they seem to be trending down. You would never know that if you listened to media even here in Texas. With a few exceptions, headlines and stories and even reporters’ social media posts tend to instill doubt and panic as opposed to merely reporting the facts.

One thing they seldom do is really look at the numbers. Those numbers are available from the state’s Department of Health and Human Services. They’ve been tracking and mapping cases from the beginning, right here.

The first thing you may notice is that the overall numbers just are not that large. Texas is a gigantic state of about 268,000 square miles and 29 million people. It includes three of the nation’s top ten cities by population — Houston (#4), San Antonio (#7), and Dallas (#9). Austin, Fort Worth, and El Paso are also up in the top 25. And Texas has vast rural areas larger than many whole states.

You may also notice from the map that the COVID clusters tend to be in the bigger and denser cities, which happen to have international airports, and along I-35 and the other highways that connect the state’s cities and towns. None of that is terribly surprising, as in the early days this was very much a traveling disease.

We now know that New Yorkers flew and drove out to the other states including Texas and brought the bug with them, and it came in from Wuhan primarily on the West Coast and from Italy primarily on the East Coast (but, no, Gov. Cuomo, it’s not a European virus).

The Texas COVID-19 numbers are not large given the state’s size and population.

These are just not that large given the state’s population size. There are more than 84,000 hospital beds in the state, for what it’s worth.

The number of deaths, while small, is misleading. Thus far 1,347 Texans have reportedly died of the disease. This number may include some who died of some other cause, but COVID-19 came to be listed as the cause of death. Hospitals have been incentivized nationwide to put COVID-19 on the death certificate to get more federal money to pay expenses. Just to be as clear as I can be, I don’t think we really have an accurate fatalities number yet and won’t for some time.

But let’s stipulate that 1,347 is the accurate number to date because it’s what the state is officially reporting.

How many of those occurred in nursing homes or long-term assisted living facilities? Those numbers are here, broken out by region and total for the state.

Subtracting nursing home/assisted living facility deaths from the state’s total of 1,347, we arrive at 733.

That’s 733 for the entire state, outside of nursing homes and assisted living facilities.

This strongly suggests that COVID-19 is more likely to kill those who are older and have underlying conditions, as we have known about this virus for months now. The death rates in nursing homes are appalling.

Should Texas really remain locked up despite the a) low infection rate, and b) low fatality rate?

With 2.4 million of its workers unemployed?

This is not and never has been a simplistic debate between save grandma by staying home or go out to work and kill grandma. That has never been the question.

It’s a question of balancing the very real public health threat posed by the virus on the one hand, with the very real threat of destroying the economy and society along with it on the other hand.

The state and local governments need people to be working. Working people buy things, use things, eat things and pay taxes. They’re also happier and less likely to do negative and destructive things.

Without working people, there are far fewer taxes to collect. Governments run out of funds and cannot provide even basic services. Commerce and supply lines break down. Companies go bankrupt and never return.

And the whole system collapses, including the healthcare system. We really should do everything we can to avoid that.

We should also protect those who are most vulnerable, starting with nursing homes and assisted living facilities. Because that’s where they are, and we know it.

Nursing Homes Account for an Appalling Percentage of Coronavirus Deaths

Bryan Preston is the author of Hubble’s Revelations: The Amazing Time Machine and Its Most Important Discoveries. He’s a writer, producer, veteran, author, Texan, and conservative strategist.